All Blacks and Wallabies combine for Lions 2025

Discussions are underway over a possible combination that would bring together the Wallabies and All Blacks to face the British and Irish Lions during the 2025 tour. The plan proposes a one-off game at the Melbourne Cricket Ground, which has a capacity of 100,000. The match would be in addition to the three tests between the Lions and Australia.

Three players who featured in the recent FOSROC Super6 Championship have moved south. Cammy Scott, the Southern Knights stand-off, his team mate Harri Morris, who turned out at flanker and hooker for the Greenyards outfit, and Heriot’s prop Dan Gamble have all signed for London Scottish on short-term deals. The trio made their debuts against Doncaster in the Championship Cup. Meanwhile, Watsonians lock Jamie Berrisford featured for Newcastle Falcons as a guest player in the Premiership Cup tie against Northampton Saints.

The RFU and SRU have been in discussions about the creation of a cross-border competition featuring Super6 clubs and the bottom four or five clubs in the English Championship, to run alongside a new 20-team Premiership-Championship hybrid competition to be played on Six Nations and autumn internationals weekends from the 2023-24 season onwards.

However, it appears that some work needs to be done to get all stakeholders on on board, with the proposal apparently raised at an RFU council meeting last week and immediately rejected by Championship clubs on the grounds that there had been no consultation.

“They went to the SRU and said, ‘We want to kick four or five clubs to play in Scotland.’ You can’t do business like this. The leadership is so off the pace,” a Championship source told The Times newspaper.

The proposals will be presented to the RFU Board on January 25th before another Council meeting on February 14th.

Scottish Rugby has confirmed that exploratory conversations have taken place.

Doddie Weir: a life well lived and a legacy that won’t be forgotten

Scottish Rugby has been active in staff recruitment over the past two months. During October and November, 16 job vacancies appeared – some for multiple positions – in both coaching and admin. However, fans who experienced the lack of basic toilet facilities at BT Murrayfield during the autumn tests, will be disappointed to note that none of the adverts was for a plumber.

This was immediately post game yesterday. Beside West 33. Will @Scotlandteam work to get this sorted before the Six Nations? Running water = basic hygiene. #SCOvARG https://t.co/CFWUTV0dRq pic.twitter.com/ku5GIe7x1e

The Top 14 match between Toulouse and Stade Francais was held up for 10 minutes after two pitch invaders interrupted proceedings. The pair wore t-shirts bearing the words ‘49-3 kills’, referring to an article invoked by Prime Minister Elisabeth Borne to pass a controversial social security law. They emerged from the crowd 15 minutes into the game and climbed the posts before attaching themselves. Eventually they were forced down by security staff and the match resumed, ending in a 16-16 draw.

Shaun Edwards has killed off speculation that he might join the England coaching set-up by signing a contract extension with France. His involvement with the French as defence coach has been a key component in the improved fortunes of Les Bleus over recent years and a 13-match unbeaten run.

Scotland centre Hannah Smith brought down the curtain on her international career after the World Cup in New Zealand. Smith made her debut for Scotland in the 2013 Six Nations then went on to earn 37 caps and score six tries. She also starred at sevens both for Scotland and in the GB squad that contested the 2021 Olympics in Tokyo.

Calvert says it as it is

Lee Calvert did not mince his words during the Guardian’s live coverage of the Autumn Test Series match between Wales and the All Blacks. He used his report to remind readers of the violence against women perpetrated by two of the Kiwi players. Calvert’s observations in the 60th minute said: “The All Blacks try to get their carrying game going in the middle of the park, with Shannon Frizzell taking a break from hitting women to have a run, before the ball is kicked towards Sevu Reece who also takes a break from hitting women to not catch it cleanly.” 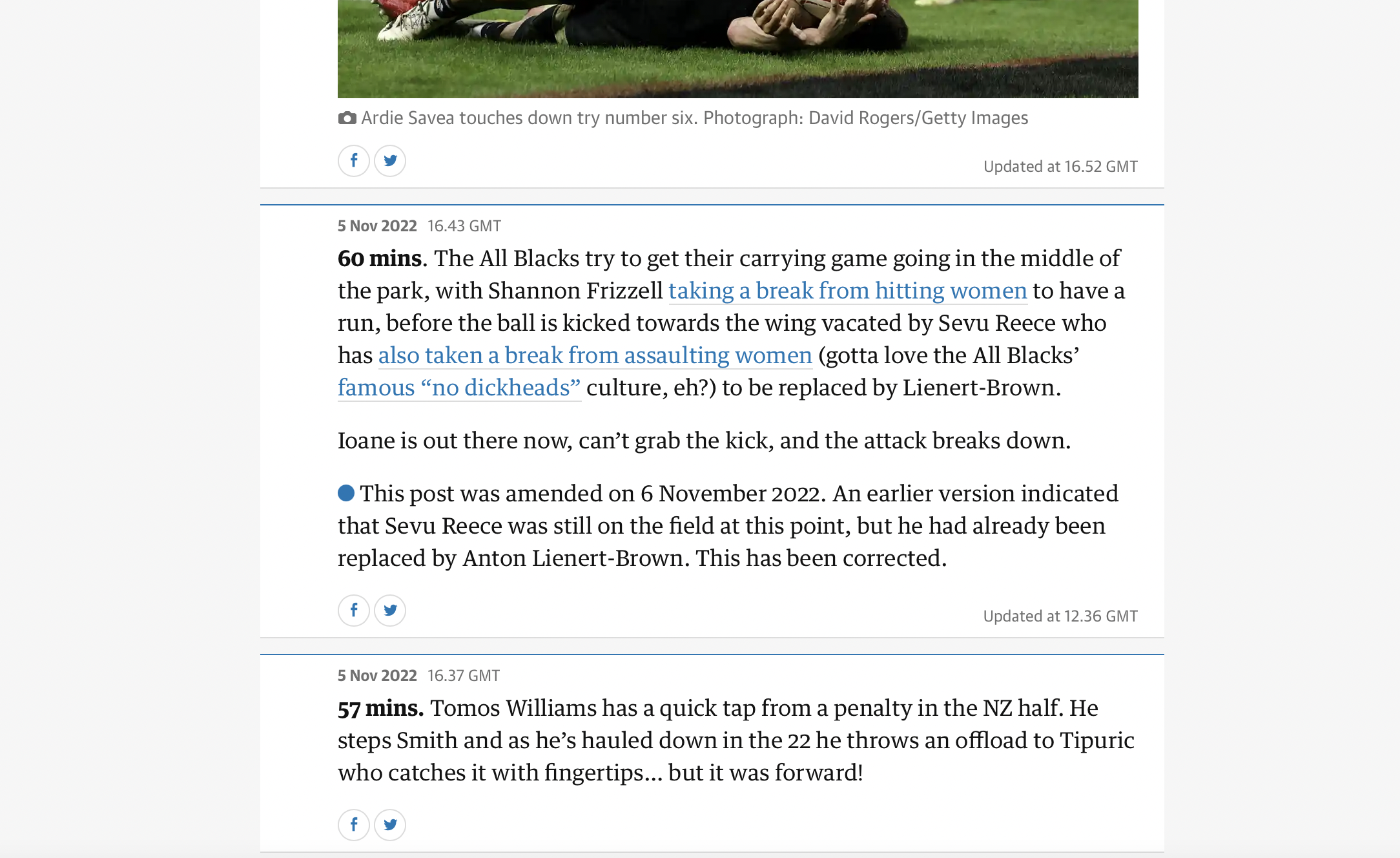 Scotland centre Chris Harris made the shortlist in the international try of the year category for his touchdown in the Six Nations match against Italy. However, the accolade went to Rodrigo Fernandez of Chile for his long-range effort in the World Cup qualifier against USA. Among the other awards, former Scottish Rugby referee commissioner, Tappe Henning, was named the top referee. Ireland’s Josh van der Flier and Ruahei Demant of New Zealand were named Player of the Year for men and women respectively. Meanwhile, Ange Capuozzo of Italy showed off his linguistic skills when he spoke in fluent Italian, French and English to accept the title of Breakthrough Player of the Year.

Portugal bagged a place at Rugby World Cup 2023 in dramatic fashion when a last minute penalty by Samuel Marques earned a 16-16 draw with USA in the deciding match of the qualification tournament in Dubai. A superior points difference meant a draw was enough to see the Portuguese clinch a place in Pool C alongside Wales, Australia, Fiji and Georgia. It is only the second time in the World Cup’s history that the Americans have failed to qualify. Meanwhile, Hong Kong beat Kenya 22-18 to claim third spot with former Dunfermline and Heriot’s stand-off Gregor McNeish contributing to the success with two conversions and a penalty.

Speculation over the future of Eddie Jones is growing, with suggestions that there is a shortlist featuring Scott Robertson, Ronan O’Gara and Steve Borthwick under consideration to be his successor as England coach after the World Cup. Meanwhile, Jones is rumoured to be in line to take over at US Eagles on a long-term contract. It looks as if Robertson’s inbox will be overflowing with offers as he appears to have been linked with jobs around the world.

The Welsh Rugby Union has been criticised for failing to modernise, and a board filled with middle-aged white men is often cited as a reason why the game is struggling both financially and in player numbers. The appointment of Ieuan Evans, the former Wales and Lions winger, as WRU Chair seems unlikely to appease the critics who see this as more of the same.

Finn has his eye on the ball

Finn Russell opened his box of tricks in the Autumn Series, showing the rugby world his vision and skill. Even when it comes to gathering a clearance kick, the Scotland stand off appears to be a bit of a maverick blessed with exceptional positional awareness, as this footage shows:

About Colin Renton 232 Articles
Colin has been a freelance writer on various subjects for more than 20 years. He covers rugby at all levels but is particularly passionate about the game at grass roots. As a fluent French speaker, he has a keen interest in rugby in France and for many years has reported on the careers of Scots who have moved across the Channel. He appreciates high quality, engaging writing that is thought provoking, and hopes that some of his work fits that bill!

That was the month that was: November 2022

Hannah Smith calls time on fine international career, reporter calls out All Blacks, and could Super6 finally have a cross-border competition? …

That was the month that was: October 2022

International call-ups and snubs, plus clubs in trouble both sides of the Atlantic and Ukraine return to action …

That was the month that was: September 2022

Where is Niko now? …

Smart mouthguards to help player welfare   Smart mouthguards will be worn at this year’s women’s World Cup in New Zealand, as well as in the Gallagher Premiership and Allianz Premier 15s for the coming …