TO QUOTE the great Sir Michael Caine: “Not many people know this”. But this weekend’s first Castle Lager Test between the Springboks and the British & Irish Lions will be the biggest world title battle in Africa since Ali crushed George Foreman in the legendary Rumble in the Jungle.

The match in Cape Town will pit the official World Rugby Champions, South Africa, against the touring Lions, who have been Unofficial World Champions since beating the All Blacks in the Second Test of the 2017 series in New Zealand.

But, you may ask, how come we can say the Lions are Unofficial World Champions?

Bruce Flockhart decides to step away from rugby

This dates back to Scotland beating England, at football, at Wembley in April, 1967. After that victory over the Boys of ’66, we Scots modestly claimed we were now the real World Champions. The thinking behind this was, in boxing, a fighter becomes World Champion and remains so until beaten in the ring – take that idea across to football and, since Scotland had been the first team to beat England, surely they were the new World Champions.

An English journalist took this idea forward. He went back to the record books, all the way to the very first international, between Scotland and England, at Hamilton Crescent, Glasgow, on 30th November 1972, and extrapolated the results forward. The Unofficial Football World Champions website is still going.

Apparently there is an Unofficial World Rugby Championship listing somewhere on the internet, but, since the information on it was a bit unclear, I decided to double-check it, going back to that first Rugby Union international, on 27th March, 1871, when Scotland beat England at Raeburn Place, by a goal and a try to a try.

The findings show, there have been 13 different Unofficial World Champions since 1871. In descending order of reigns they are:

The Lions have been unofficial champions for the longest continuous period – just under 12 years between beating the Springboks in south Africa in 1938 and losing to the All Blacks in New Zealand in 1950.

Scotland had the shortest reign – a mere four days between beating Samoa 35-20 on 20th October 1999 and losing 18-30 to the All Blacks four days later. That short reign was also the last time Scotland has been Unofficial World Champions.

That 1999 Rugby World Cup saw the unofficial title change hands five times over the course of the event. Wales went into it as unofficial champions – they surrendered that title to Samoa, who in turn lost it to Scotland, who were then beaten by New Zealand. Then France took it off them, before losing their crown to Australia in the final. The unofficial title, by the way, has four times changed hands in the actual Rugby World Cup Final.

Scroll down to continue reading:

Interesting, too, that Scotland’s legendary Grand Slam win over France at Murrayfield on 17th March, 1984 gave them the unofficial world crown. It was followed, however, on 20th May 1984 by the boys in blue surrendering the mythical title to Romania in their first defence.

This was the first time a Tier Two nation had held the title, but, when it comes to losing to the underdogs, nobody has done it better than Wales. They were reigning Unofficial World Champions going into the 1999 Rugby World Cup, as highlighted above. Then, in 2013, handicapped by having a host of their top players on Lions duty in Australia, a callow Welsh squad surrendered the title to Japan in Japan.

Anyway, whether or not the unofficial world title is on the line, this afternoon’s match is sure to be an absolute cracker, a true Test match in every sense of the words. As a world title battle though, it perhaps deserves to be staged at Caesar’s Palace in Las Vegas, or Madison Square Garden in New York City, the traditional home of heavyweight title fights.

And another thought, why shouldn’t rugby – between World Cups – go down the road of the holder putting their title on the line whenever they take the field? It already happens in the Ranfurly Shield in New Zealand and the Bill McLaren Shield in Scotland.

HERE are the details of the matches in which the Unofficial Rugby World Championship has changed hands, starting from the first international at Raeburn Place in 1871.

In the very early days, only goals counted, so for these matches the scoring system adopted in 1890 – three points for a try, a penalty goal or a goal from a mark; four points for a dropped goal and two points for a conversion – was used. 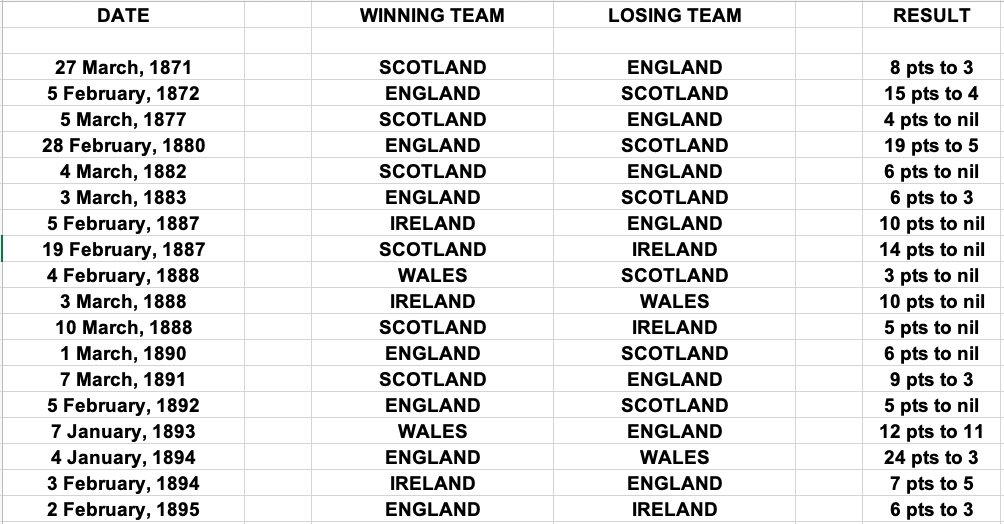 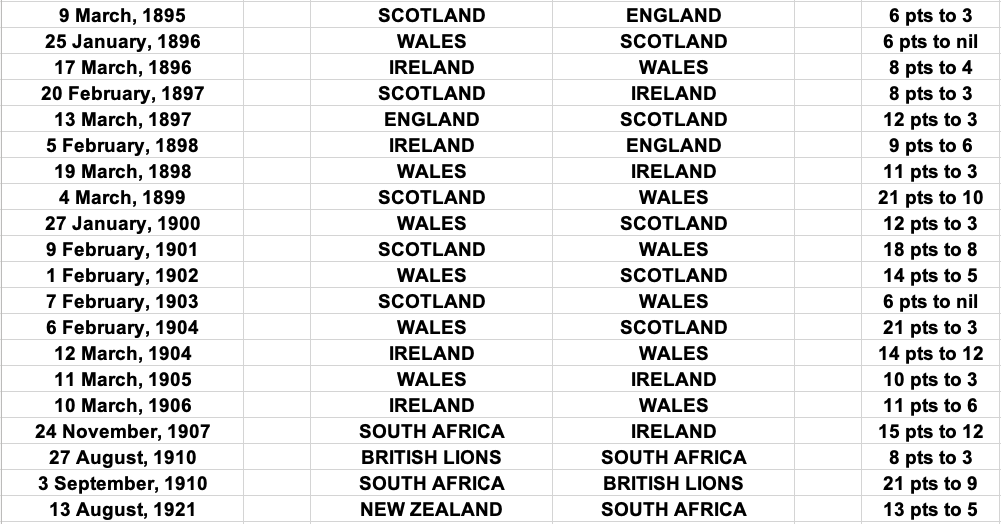 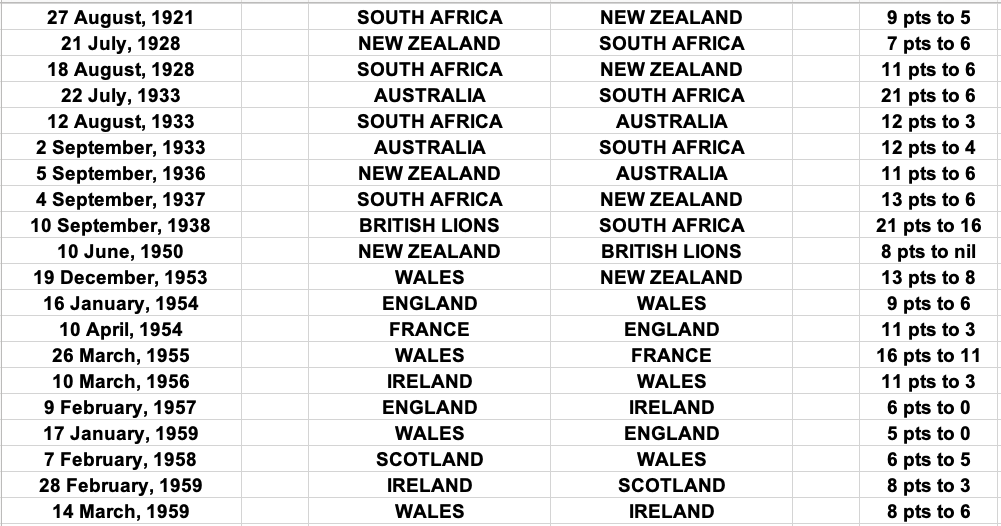 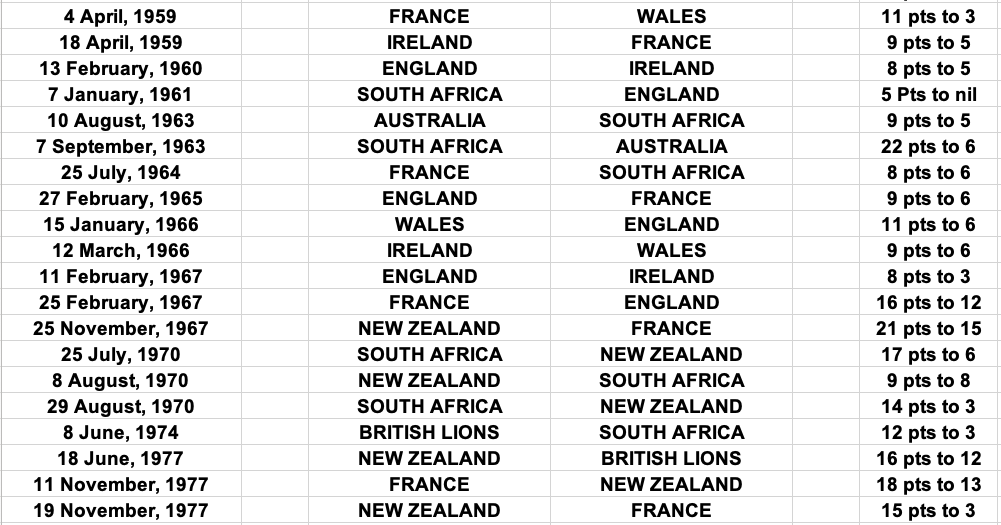 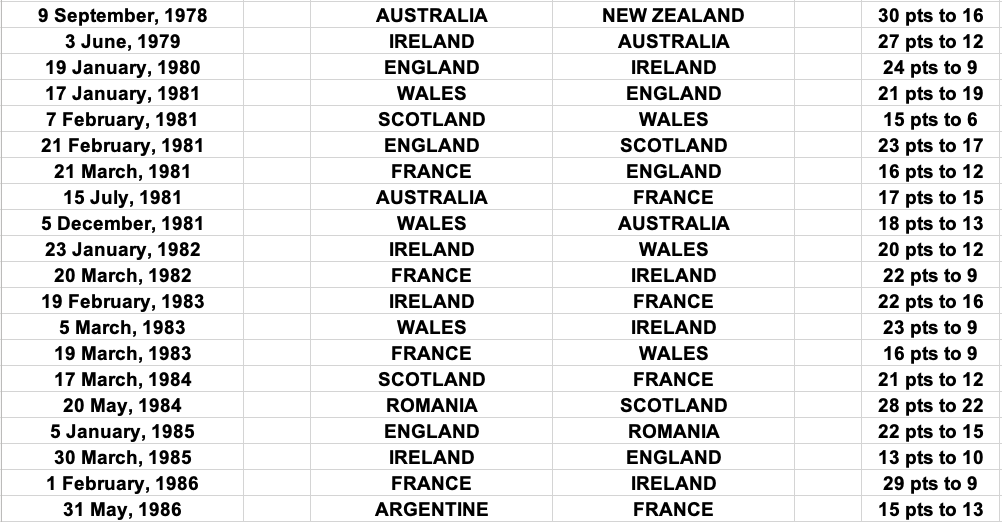 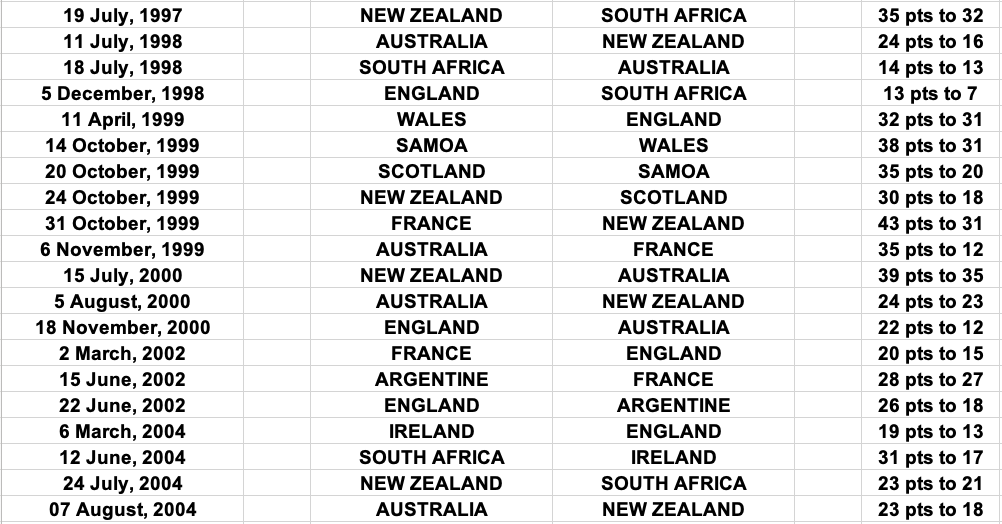 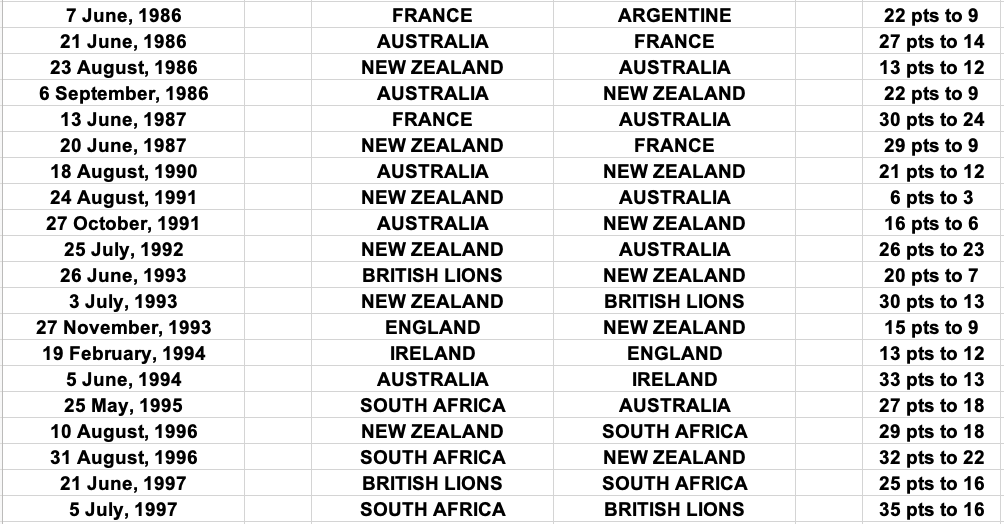 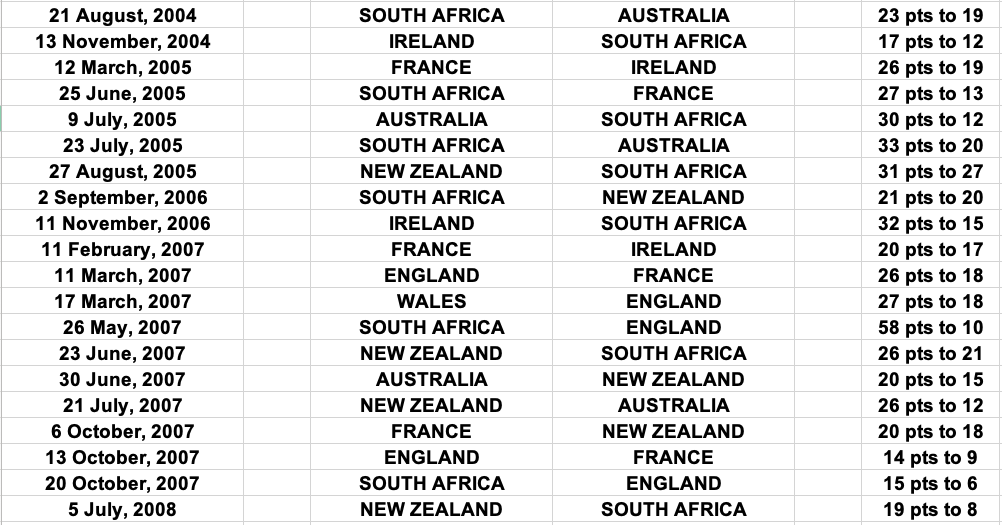 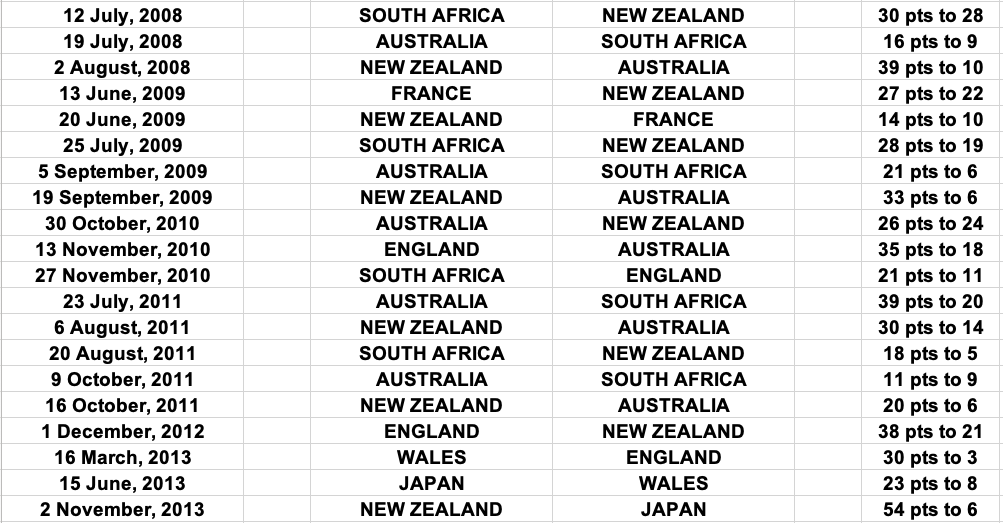 About Matt Vallance 37 Articles
Matt is a former member of Cumnock Rugby Club's 'Mean Machine' - motto: "Well, we won the fight". He has written about some 60 sports in a long career, mainly spent freelancing for, amongst others: The Herald, The Scotsman, The Sunday Times, Scotland on Sunday, the late-lamented Sunday Standard and just about every national paper. He survived a spell at the Paisley Daily Express, covering St Mirren and the Paisley Pirates every week. He now writes a lot of sporting obituaries, since he saw many of his subjects play. Opinionated, passionate and, as one Bill McMurtire once said: "The only Cumnock member (other than Mark Bennett) who can be let out without an escort". In his 70th year, Matt, known to many as: 'Snuff', still has a few noses to get up. Unfulfilled ambition - to live long enough to see Scotland beat the All Blacks.

Stirring second half performance from visiting pack pulverises home side …

A late long-range penalty from the hosts drops just short …

Premiership: Edinburgh Accies win but make life hard for themselves versus Jed-Forest