Game of the Year –

The judges said: “This was club rugby at its very best. Thrills, spills and passion through the roof.

“Berwick produced a heroic fightback from a seemingly hopeless position to lift the National Shield in a dramatic contest. Greenock Wanderers looked to have completed an unbeaten season with panache when they led 35-11 with less than 20 minutes to play. But nobody had told Berwick that the game was over and they mounted a finale that was brimming with character to send the match into extra time.

“Then, having never held the lead during the 80 minutes, they scored the only points of the additional 20 minute period to record a memorable 57-35 victory.

“Two brilliant clubs who had fantastic seasons produced a fitting finale on the international pitch which will live long in the memory of anyone lucky enough to have witnessed the spectacle live. Well done to everyone involved!”

The Lazarus of Bethany Award for Comeback of the Year –

The judges said: “An honourable mention to Hoggy’s hairline but the award goes to Scotland in the Calcutta Cup match at Twickenham back in March, when Gregor Townsend’s men found themselves trailing after trailing 31-0 just before the break and somehow fought their way into a winning position with just five minutes to go. That they couldn’t hold for a famous win in London feels typically Scottish, but kudos to everyone involved for the role they played in one of the most remarkable games of rugby ever witnessed.”

The judges said: “Those days immediately after the national team’s humbling defeat to Ireland in their World Cup opener were dark. When the SRU Twitter account tried to lift spirits two days after the game with some ‘breaking news’ that a major refurbishment of the some conference and match day suites at Murrayfield had been completed, it went down like a lead balloon.

“As one irate replier put it: ‘What time does the open-top bus hit Princes Street? I want to get there early to celebrate this!’

BREAKING | ​Scottish Rugby has extended its relationship with @elioruk and completed a major refurbishment of a number of the conference and matchday suites at @BTMurrayfield.https://t.co/QKVuVYUOYH

“Unperturbed, the following day the SRU introduced their new ‘independent commentator’, who penned an article on the SRU website which explained that Scotland fans had only themselves to blame for being upset by what they had witnessed during the Ireland game because they had unrealistic expectations. It is hard to explain how crass this is given the hype Murrayfield had lavished on Gregor Townsend and the team before they set out for Japan.

The Theresa May Award for Shortest Time in the Top Job –

The judges said: “Just 13 months after first taking the reins of the Scottish pack in October 2018, it was announced in November 2019 that Danny Wilson would be moving on to replace Dave Rennie at Glasgow – conveniently filling a gap at the pro team and opening up the opportunity for a much needed shake-up of the coaching set-up for the national team. All in all, a fairly underwhelming exhibition of musical chairs.”

The Denis Law Award for Nutmeg of the Season –

The judges said: “Once we knew that this award needed to be handed out, there was only one winner. We couldn’t think of a single other person who had pulled off this stunt.”

Super6 Try of the Year –

WATCH | A fantastic team try from @MuirBears finished with Cammy Gray touching down out wide.

The judges said: “At long last, the new league to sit above the traditional domestic structure is up and running. There was always going to be challenges during the opening months, with the logistical complications of it being a World Cup year and some adverse weather having an impact.

“So, plenty still to work on, but those running the new competition have always insisted that this was not going to be a slow-burner rather than an instant blockbuster.

“What we can see at this stage is that the players are bigger, faster and fitter than the old Premiership, and that it is a more professionalised environment. As this try from Cammy Gray helps show.”

Club Rugby Try of the Year –

The judges said: “A fantastic, sweeping team-effort which proves that there is still real value in Scottish club rugby … and that people like Stuart Cameron do a brilliant job in helping promote the level of the game by producing high quality footage.”

Scotland Try of the Year –

The judges said: “A brilliantly timed pass from Finn Russell, and great running angle, pace and power showed by Sam Johnson. This was an excellent try in its own right, but the context is what made it the outstanding candidate for try of the year. Having fought their way back from a seemingly hopeless 31-0 deficit, this score took Scotland into the most unlikely of leads and for seven glorious minutes it looked like being one of the most remarkable results in sporting history. Then, two minutes into injury time, the inevitable happened, when George Ford sneaked in and converted his own try to snatch a draw for England.

“But that moment, when Johnson dragged three Englishmen over the line with him, was still one of the greatest experiences any Scottish rugby fan will ever have the privilege to savour.”

Edinburgh Try of the Year –

The judges said: “As is his habit, the Hawick man times his run to perfection with a scintillating brace in his final outing of 2019. The first of those scores against Glasgow Warriors last Saturday was the real deal, sparked by a rumbustious break from deep by Duhan van Der Merwe, the Viliame Mata got involved with an outrageous backhanded offload, before Graham demonstrated all his pace and agility to finish off a breathtaking, length-of-the-park score.”

Glasgow Warriors Try of the Year –

The judges said: “Quite simply, Niko at his irrepressible best.”

Women’s Try of the Year –

The judges said: “It has been a tough old year for the Scotland Women’s team, who finished bottom of the Six Nations table with one losing bonus-point to their name. However, the arrival of Philip Doyle as head coach and a successful tour to South Africa has had a reinvigorating effect. And this try from Rhona Lloyd shows that there is real firepower in the side.”

The judges said: “Back in August, as the SRU were limbering up for their Annual General Meeting with the usual schedule of positive spin stories, they fired out a press release and a letter to clubs in which they gleefully told us that the organisation had become ‘debt free’. Except, that was only the case if you don’t count all of the money owed.”

The judges said: “At the start of the week of Scotland’s crucial final World Cup pool match against Japan, Gilpin stated that there was a “robust contingency programme” in place for the event of a typhoon hitting one or more of the tournament venues. Given that this was typhoon season in Japan, that was good to know.

“Two days later, it emerged that what this plan amounted to World Rugby crossing their fingers and hoping for the best. With Typhoon Hagibis heading straight towards Yokohama, where the Scotland v Japan game was due to be played, we were told that there was no way the match could be moved or rescheduled, so it would be cancelled and Japan would progress if the storm hit.

“SRU Chief Executive Mark Dodson was having none of it and mounted a media blitz to pressurise World Rugby into coming up with a more palatable solution. World Rugby would not budge. Having already sent Italy home, they had created a precedent that had tied their hands. It was farcical.

“In the end, the storm slipped by Yokohama and the game went ahead. Scotland lost and Japan progressed. But World Rugby/Gilpin weren’t finished yet, bringing a charge of disrepute against the SRU, prompting another unsavoury stand-off between the global governing body and one of its founder members.

“Eventually,  a compromise was reached whereby, the SRU made a £70,000 ‘donation’ to World Rugby as opposed to paying a fine, and ‘expressed its regret’ rather than apologised for Dodson’s behaviour.”

“Both sides may have felt they had saved face, but neither came out of it well.”

(aka The Mitchell Brothers)

The judges said: “Edinburgh head coach Cockerill and his defence coach MacRae have got their ‘Phil and Grant Mitchell having a bad day at the  Queen Vic’ impressions spot on. Sitting in the technical box at the back of Murrayfield’s West Stand on home match days, they live and breathe every moment of every match – all simmering aggression and uncompromising ruthlessness. However, with the glass frontage removed, this is a viewing experience which really should not be available until after the watershed.” 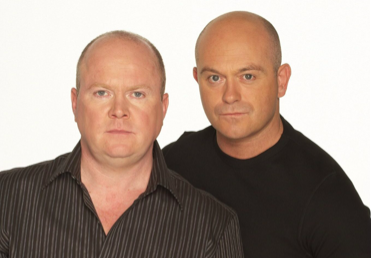 And finally, a moment of reflection for the great people of Scottish rugby we lost this year, including (but not exclusively) –