Scotland’s summer tour saw the Hornes and the Fagersons added to the band of brothers that have played for their country. However, the All Blacks went one better when three Barretts lining up against France. It was not plain sailing for the trio, with Jordie having to explain why he was eating a burger in a stranger’s apartment at 5 am, hours after playing for the Hurricanes before heading to the All Black camp.

Meanwhile, in another family link-up, Owen Farrell captained the England rugby union side against South Africa on the same day that his uncle Sean O’Loughlin led the rugby league team against New Zealand.

The table below shows analysis by the website http://www.itsrugby.fr/ of the amount of pro rugby played by those named in the squads for the penultimate weekend of the World Rugby U20 Championship. As a reminder, France defeated England in the final. Scotland, meanwhile, finished tenth – credit to the players who plied their trade in the BT Premiership last season. 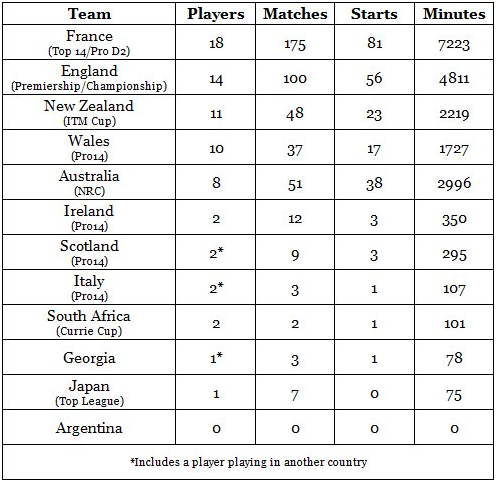 Stade Nicois finish on a downer

Stade Nicois ended a successful season on a downbeat note when they lost at the quarter final stage of the French Federale 2 championship. In the first season of a link-up with Scottish Rugby, the club has proved to be a stepping stone for Dave Cherry and Bruce Flockhart to gain contracts with Edinburgh and Glasgow Warriors respectively. However, after going through the regular campaign unbeaten, the first defeat came against Bedarrides. Despite the 16-10 loss, Stade Nicois had already secured promotion to the third tier of French rugby next season.

One division lower, CA Perigueux, with former Scotland prop Tom Smith now among the coaches, suffered a 34-29 defeat at the hands of Floirac at the quarter final stage of the Federale 3 competition.

Hans-Peter Wild, the owner of both Stade Francais and Heidelberg as well as a substantial backer of the German national side, has announced plans to sever ties with German rugby. Wild’s relationship with the German federation had become increasingly fraught and prompted him to announce that he was withdrawing financial backing and dissolving his rugby academy in Germany. The move is too late to make a difference to the decision by EPCR to ban Heidelberg from the European Challenge Cup next season because Stade Francais will also feature in the competition. Despite the upheaval, Germany beat Portugal to secure a play-off spot against Samoa for a place at next year’s World Cup.

Meanwhile, the French international side went down to a 3-0 series defeat in New Zealand. There was some consolation for those who have felt in the past that referee John Lacey is biased against Scottish teams. As the clip leading to a Damian McKenzie try in the final test shows, it is not only Scots who have been on the wrong end of some dodgy decisions by the Irishman:

Sebastien Rouet, the Belgian scrum-half, and the Spanish lock Lucas Guillaume have had their contracts rescinded by Narbonne after both were found guilty of unprofessional conduct when they abused the referee during the controversial World Cup qualifier between the two countries.

Pacific Rugby Players, an organisation created to support the interests of individuals playing in Europe, beefed up its ranks with the appointment of Junior Fatialofa in England as well as Marion Salvaudon and Joe Rokocoko in France. The trio will have the task of helping players from the Pacific region adjust to life abroad.

Worried about youngsters being forced to choose between football and rugby at too young an age, the Congolese Rugby Federation has launched an initiative called Foot-Rugby. The plan involves one hour of football training and one hour of rugby. Football teams train together then move as a group to try rugby. In the week of the activity the federation signed up 123 players aged between 5 and 16. There is now a plan to extend the initiative to Basket-Rugby, Volleyball-Rugby, Handball and athletics.

Rice work if you can get it

A waterlogged pitch at the height of a Scottish winter will never seem the same again after watching this clip of rice field rugby in Japan:

About Colin Renton 212 Articles
Colin has been a freelance writer on various subjects for more than 20 years. He covers rugby at all levels but is particularly passionate about the game at grass roots. As a fluent French speaker, he has a keen interest in rugby in France and for many years has reported on the careers of Scots who have moved across the Channel. He appreciates high quality, engaging writing that is thought provoking, and hopes that some of his work fits that bill!

That was the month that was: February 2022