Aussie legend George Smith has been back playing in his native country for Queensland Reds before taking up a contract with Bristol Bears for the coming season. At 38-years-Old, Smith has earned the label ‘veteran’ and the accuracy of that term was underlined by the fact that among his Reds team mates was Jordan Pataia. The full-back was born four days after Smith made his top flight debut with Brumbies in March 2000.

Seawolves triumph in US showdown

Seattle Seawolves won the inaugural Major League Series beating Glendale Raptors 23-19 in the final. The season was brief, having started in April, but there are plans to extend it next year, with the initial round of fixtures scheduled for January and more teams likely to be involved. The competition attracted decent crowds and, combined with three test victories for the US Eagles in June – including a success over the touring Scotland side – rugby across the Atlantic looks to be on an upward trajectory.

Further bumps in the road to Japan

World Cup qualification matches have thrown up a fair share of controversy, on and off the field. The fall-out from the Belgium versus Spain encounter, refereed by a Romanian whose country could qualify for the finals if the result came out the right way, is still rumbling on. In July, the spotlight moved to Africa where Zimbabwe travelled to play Tunisia in a match that was also part of the African Gold Cup. The Zimbabwean squad were unhappy with the standard of accommodation offered by their Tunisian hosts. Pictures on social media showed players sleeping on the streets ahead of the game in Beja. In addition to the poor standard of their hotel, they also complained that they had been delayed on arrival at Tunis Airport by customs officers who demanded payment for entry visas. Tunisia won the match 18-14 against a Zimbabwe side led by Denford Mutamangira. The prop, who was winning his 50th cap is remembered at Millbrae for a successful sojourn with Ayr in 2012-2014. 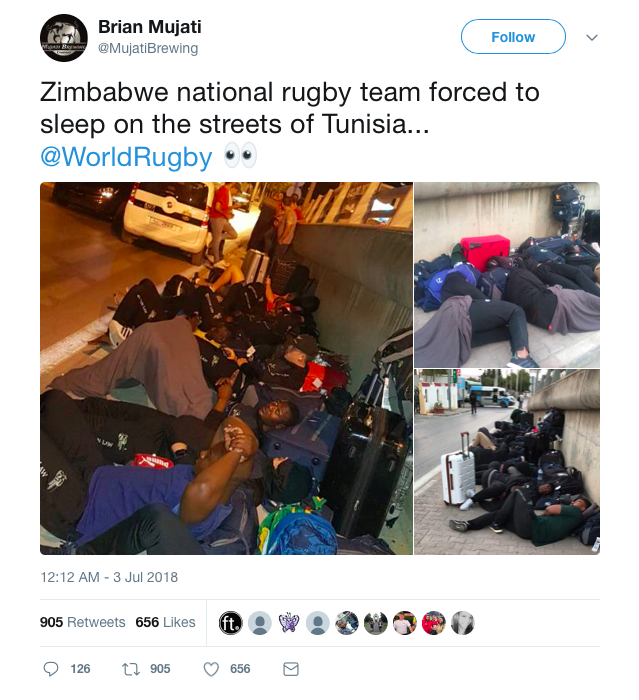 The French League (LNR) has taken steps to improve player safety by introducing four rule changes for the coming season. Teams will be allowed to make 12 substitutions. Players who have been replaced will be allowed to return to the field in the event of injury or blood injury, HIA, a front-row player being sent off, or in the case of a player being shown a blue card. The blue card was trialled in the third tier Federale 1 and the women’s Top 8 championship last season and allows the referee to force someone to leave the field if the official believes the player has suffered a severe head knock.

The inclusion of two South African sides in the PRO14 has been deemed a success. And there could be a stronger Springbok flavour to the competition according to chief executive Martin Anayi. He has revealed that he believes a 16 team competition is the ideal size. Discussions are understood to have taken place with the Sharks, Lions and Stormers over who might be next to sign up.

World Rugby and Rugby Europe are believed to be in discussions to launch a competition to be held every four years and involving the participants of the NatWest Six Nations plus Romania, Georgia, Spain, Germany, Belgium and Russia.

The Portuguese domestic season must surely have earned the honour of being the longest in history, with the championship final now scheduled to take place on 22 September, 358 days after the first fixture of the league programme. The semi-finals took place in April but one of the matches, between Direito and – somewhat aptly – Agronomia was halted after fighting between players, coaches and supporters. The Portuguese Federation awarded the title to Belenses, winners of the other match and relegated the scrapping semi-finalists to the second division. On appeal, that decision was reversed and both sides were reinstated to the top flight, with Agronomia, who were leading when the match was abandoned, now set to meet Belenses in the title decider.

About Colin Renton 235 Articles
Colin has been a freelance writer on various subjects for more than 20 years. He covers rugby at all levels but is particularly passionate about the game at grass roots. As a fluent French speaker, he has a keen interest in rugby in France and for many years has reported on the careers of Scots who have moved across the Channel. He appreciates high quality, engaging writing that is thought provoking, and hopes that some of his work fits that bill!

Late drama at Netherdale after match goes to extra time …

That was the month that was: December 2022

That was the month that was: November 2022

Hannah Smith calls time on fine international career, reporter calls out All Blacks, and could Super6 finally have a cross-border competition? …

That was the month that was: October 2022

International call-ups and snubs, plus clubs in trouble both sides of the Atlantic and Ukraine return to action …

That was the month that was: September 2022

Where is Niko now? …