Rome is where the start is (apparently)

The Guinness Six Nations promotional video was a little light on some of the highlights of Scotland’s 2018 campaign, and had even fewer snippets from Ireland’s Grand Slam winning effort.

Any suggestion that the marketing guys were not quite on the ball were confirmed when the official website carried the image below. While a trip to the Eternal City is pleasant at any time, it would be a wasted journey on 2ND February given that any supporters looking to take in the match between Gregor Townsend’s side and the Azzurri will have made their way to BT Murrayfield. 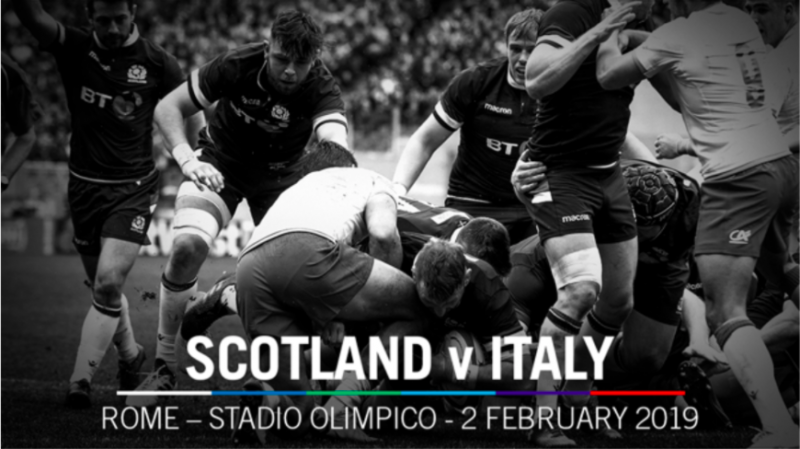 All Blacks flooding the transfer market

Club owners around the world are dusting off their cheque books and joining the race to sign an All Black for next season. No fewer than 26 Kiwis will be out of contract after the World Cup, including big names such as Sonny Bill Williams, Brodie Retallick, Beauden Barrett and Dane Coles. In fact, Ryan Crotty is already the subject of interest from Racing 92, Toulouse and Northampton. Barrett has been linked with Lyon, although the French outfit has baulked at the €2.5 million wage bill and it looks likely that he will join a Japanese club.

South Africa has seen an exodus of players to the Northern Hemisphere in search of a major pay day, and Springbok hooker Schalk Brits has come up with a proposal to halt the talent drain. Brits, who spent a decade at Saracens, has proposed a system of tax benefits. While such a move might not be sufficient to discourage big money moves, it could prevent the departure from South Africa of the more experienced journeymen whose departures are stripping the domestic game of role models and mentors.

Hervé Moni, the co-ordinator of Stade Nicois remains upbeat for the future of Scottish Rugby’s partnership club, despite the threat of relegation to the fifth tier Federale 3 for failing to balance the books – a situation that arose because of win bonuses paid out last season. He is confident that an appeal against the decision will prove successful and is angry at the judgement by the DNACG, the organisation that oversees financial affairs at sports clubs. “To be relegated for a deficit of €90,000 on a budget of €2 million is infuriating,” said Moni. Scots Archie Erskine and Hamish Bain have earned plaudits for their performances at the club which is challenging for promotion to the ProD2 – depending on the outcome of the appeal.

South African sides have revealed the superhero strips they will wear for February’s Vodacom Super Rugby double-header. The designs are loyal to the normal colours worn by each of the teams. The Emirates Lions will don tops resembling Spiderman, the Cell C Sharks will have a Black Panther theme, the DHL Stormers have chosen Thor, and the Vodacom Bulls have opted for a Captain America look. The idea came from a collaboration between South Africa Rugby and various commercial organisations including Marvel and Vodacom. The teams will wear the shirts in derby matches throughout the Vodacom Super Rugby season.

Tragedy struck Samoan rugby when Faiva Tagatauli died four days after suffering a head injury while playing in a club game for Vaimoso against Vailele. The 27-year-old collapsed after coming off with 10 minutes to play and was taken to hospital where he later died.

Ulster chief executive Jonny Petrie wasted no time in dealing with racial abuse directed towards Simon Zebo during the Irish side’s Heineken Champions Cup clash with Racing 92. The Irish international explained that he had been engaging in good natured banter with the crowd when one supporter made an inappropriate comment. A statement from Ulster said: “Following a robust investigation into allegations of abuse directed at Simon Zebo during the fixture versus Racing 92 on Saturday January 12, Ulster Rugby has sanctioned a life-time ban on a spectator, for breaching our stadium regulations”.

Welsh clubs in the doldrums

With both Edinburgh and Glasgow Warriors qualifying for the knock-out phase of the Heineken Champions Cup, the game in Scotland appears to be in good health. In sharp contrast, Welsh clubs have suffered a precipitous decline in fortunes. Last year, Cardiff Blues lifted the Challenge Cup and Scarlets exited the top tournament at the semi-final stage. This time, no club from The Principality has made it to the quarter finals, a situation that is surely a source of concern for the WRU. There have been suggestions that fortunes on the field are being overlooked and too much focus has been placed on Project Reset, the financial realignment between the WRU and Welsh clubs.

Finn Russell faces a busy few months after his rival for the stand off berth at Racing 92 announced his retirement. Pat Lambie, the South African who was expected to share the playmaker duties with Russell recently returned to training after injury. However, the 28-year-old had suffered several head knocks during his career, and experienced headaches, trembling legs and eye issues. He has decided to call a halt with a year left on his contract in order to prevent any further risk to his health. Racing are chasing silverware on the domestic and European stages. Lambie’s departure means Russell will have Raphael Lagarde and Ben Volavola – the Fijian who featured at Murrayfield in the Autumn test – as back up.  With Lagarde having agreed a move to Agen next season, Racing 92 are now being linked with the signing of another South African, Handré Pollard.

Finn Russell feels the benefit of juggling club and country

About Colin Renton 220 Articles
Colin has been a freelance writer on various subjects for more than 20 years. He covers rugby at all levels but is particularly passionate about the game at grass roots. As a fluent French speaker, he has a keen interest in rugby in France and for many years has reported on the careers of Scots who have moved across the Channel. He appreciates high quality, engaging writing that is thought provoking, and hopes that some of his work fits that bill!

Smart mouthguards to help player welfare   Smart mouthguards will be worn at this year’s women’s World Cup in New Zealand, as well as in the Gallagher Premiership and Allianz Premier 15s for the coming …