WITH Sean Kennedy (who is on a partnership contract with Glasgow Warriors) and Kristian Kay injured through the first three rounds of matches in this inaugural Super6 campaign, head coach Ben Cairns has been thanking his lucky stars that Caleb Korteweg (the third scrum-half in his squad) got in touch through an intermediary at the tail-end of last season to see if there was anything doing in the new league.

The 22-year-old has had to play every minute of every game so far – which is highly unusual in a specialist position such as scrum-half – but he has taken it all in his stride with typical Kiwi level-headedness.

“It’s been awesome – a really good standard of rugby, real physical and every game is just so tight that there is no room to relax,” said the 22-year-old, ahead of this afternoon’s clash against Ayrshire Bulls, which will be shown live on the BBC Scotland website.

Aberdeen Grammar v Selkirk: hosts frozen out of it

“I think that’s the best thing about it, there is no real gap between any of the teams and every game is down to the wire,” he continued. “It’s technical rugby – real structured – whereas back home it is maybe a bit more about throwing the ball and chancing your arm.

“But I’m liking the style. As a nine, it is good to grow and develop your game by playing a style you wouldn’t experience where you have come from.”

Korteweg was a member of the New Zealand Under-20s wider training squad ahead of the 2016 Junior World Championship and has also played age-grade rugby for the Chiefs. He spent last season playing club rugby at Melville – the club where he stated out as a five-year-old – in the local Hamilton competition, whilst completing the last year of his degree in business analysis at the University of Waikato. He always had it in his head that he fancied using rugby as a vehicle to see a bit of the world once his studies were complete.

“I’ve got Scottish heritage – my granny was born in Glasgow and married a New Zealander then emigrated  – so when I saw online about Super6 I thought it sounded really exciting and I just tried to network myself over here,” he explained.

“I got in touch with an old coach of mine who had played in Scotland under Ben at Currie – Jamie Semple – who made a few calls. So, as Ben was transitioning from Currie to Stirling, he got in contact and asked me to send over some footage, and when he came back to me and asked if I wanted to be part of it I jumped at the chance.

“I’d just finished uni so it was the perfect time to go see a bit of the world and play a bit of rugby in a different environment. I just came over to have a crack in Scotland while I am still young. I’m just trying to play some good footie and see where it takes me. Getting a pro deal would be the goal but at the moment I’m just enjoying settling in here. 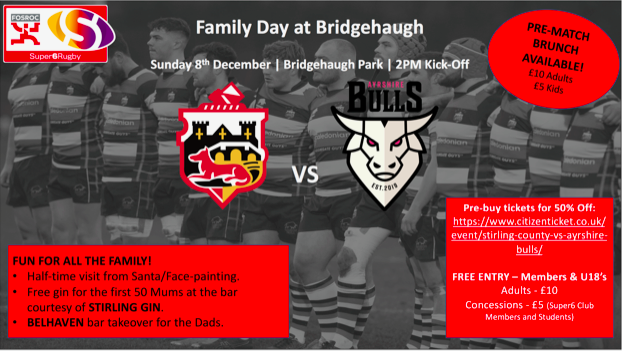 “I’m in a flat with one of my team-mates, Landon Hayes from Australia. At the moment we are just chilling – we’re not training as a team every day but we try to get out and do as much extras as we can – and we’re looking to do a little bit of travel over the Christmas break to see some of the UK. I’ve also managed to catch up with my granny’s nieces, who are still in Glasgow, so that’s the first time I’ve met them.”

Korteweg is unlikely to get the full 80 this week with Kay fit again to provide cover from the bench. Meanwhile, with Josh Henderson out injured until the New Year, Andrew Goudie gets his first start of the season at stand-off, having been left frustrated when his opportunity to play last week against Heriot’s was scuppered by the frost.

In the pack, Andrew Davidson is released from Glasgow Warriors to start in the second-row, with Ollie Bartlett shifting to the back-row and Matt Smith dropping to the bench. George Arnott misses out.

On the bench, Mark New comes in for Euan Cunningham and Bruce Sorbie makes a timely return from injury in place of Ollie Horne, who picked up a knock in training this week.

“Our players are raring to go after a week off and our focus is on bringing concentration and accuracy to our performance,” said home head coach Fergus Pringle. “We want to start the game better than our previous game but also know we’ll need an 80-minute performance as the Bears stay in the fight for the whole game.

“We know that the Bears will come into the game full of confidence after their win against Heriot’s a couple weeks ago. They have proved to be difficult opponents in all of their games so far with a strong pack at set-piece and some dangerous backs creating opportunities through transition play.”

The Bears are boosted by the release from Glasgow Warriors of Fijian World Cup hooker Mesu Dolokoto, who is on the bench alongside his pro clubmate Charlie Capps.

“The derby element brings a different feel to this game, especially with the Allan McNish memorial trophy to be played for between the two squads over consecutive weeks,” said Bears head coach Graham Shiel.

Super6: Watsonians shrug off slow start to get the better of the Bulls

Watsonians 34 Ayrshire Bulls 21 STUART BATHGATE @ Myreside BARELY clutching on to this contest by their fingertips at half-time, Watsonians took a stranglehold on it in the third quarter to secure a five-point victory …