THE SCOTTISH RUGBY UNION’S Standing Committee on Governance (SCOG) has issued a high-level overview of their proposed new governance structure for the organisation, and a consultation period with member clubs will begin shortly.

Under the proposals, the SRU Trust and Council will be dissolved but member clubs’ ownership of the Union will be enshrined in the new structure, according to Scottish Rugby President Ian Barr.

The Trust will be replaced by a NewCo – a company limited by guarantee – which will “sit at the apex of the Scottish Rugby ecosystem”, said Barr. The board of the NewCo will have an active oversight role and be directly accountable to the membership. “We believe this structure provides strong representation and protection for the membership, with appointments on its board being directly elected by members,” added Barr.

Crowds to return for Edinburgh and Glasgow Warriors pre-season matches

Scottish Rugby Union Limited will remain as the main operating vehicle within Scottish Rugby, responsible for the day-to-day running of the business and overseeing the new Club Rugby and Performance Rugby Boards, which will be created to provide greater autonomy to how those parts of the game run.

It is suggested that five ‘area rugby boards’ – South, East, West, Midlands and North – be created underneath the Club Rugby Board to provide local solutions to local problems.

The Club Rugby Board will be chaired by the Vice President of the Union and be populated by the elected chairperson of each of the five areas  plus the Director of Rugby Development and the CFO/Finance Director.

To view the ‘Initial Consultation Document of the Standing Committee on Governance’ click HERE. 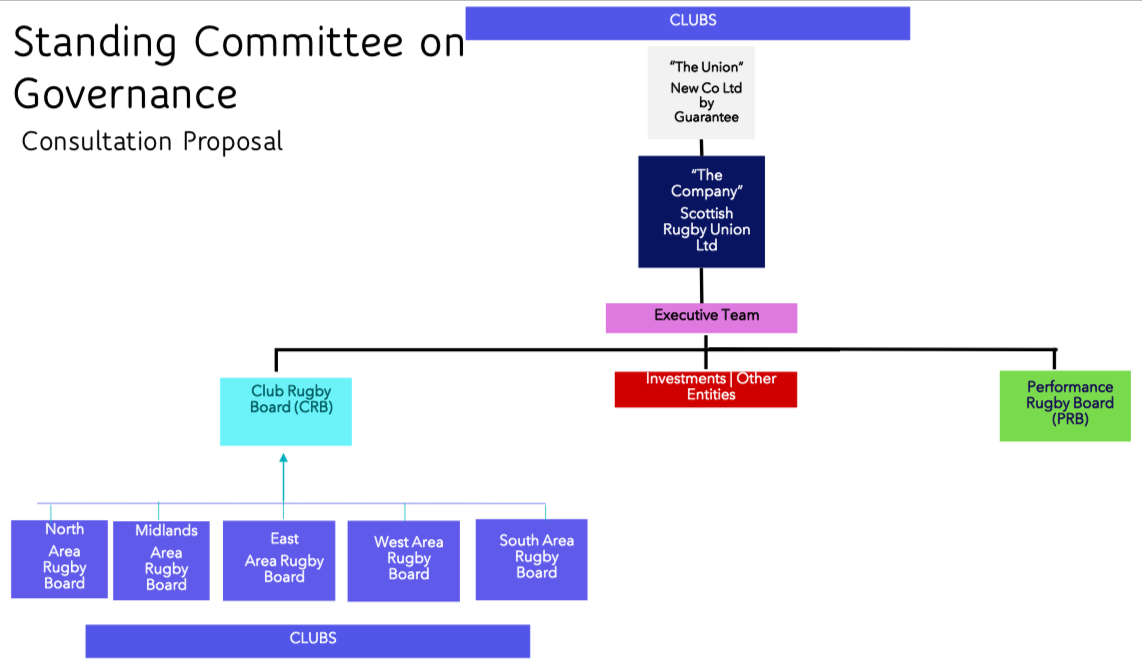 About David Barnes 3112 Articles
David has worked as a freelance rugby journalist since 2004 covering every level of the game in Scotland for publications including he Herald/Sunday Herald, The Sunday Times, The Telegraph, The Scotsman/Scotland on Sunday/Evening News, The Daily Record, The Daily Mail/Mail on Sunday and The Sun.