BETTER late than never. Part two of the Scottish Rugby Union’s Annual General Meeting for 2022 will take place by video call tonight (Wednesday), with club delegates having the opportunity to ask questions about and then approve (or not) the organisation’s financial statements, which were eventually published three weeks after their mandated deadline last Thursday evening.

Then an SGM to give final approval to the Scottish Rugby Union’s new governance structure, which has been painstakingly drawn up by the SRU Council’s Standing Committee on Governance over the last two years, will take place on the same channel immediately after the AGM. This should be a formality after a huge majority endorsed the draft plans back in June, with the only real concern being the unlikely possibility that a quorum isn’t reached because too many clubs take the view that it is a done deal and don’t bother tuning in to vote.

It is the second time in as many years that the accounts have not been delivered on time (last year was the first time on record), and the provision in the Articles of Association for the new governance structure which allows six months to complete this process is presumably a concession to that (although it is not entirely clear why a business of this size – which should have management accounts reporting monthly – can’t get the job done within the current three month deadline).

It is disappointing that the AGM is purely by video call and not the hybrid model which was supposed to become the norm after the Covid lockdown, because there is no doubt that this approach is less conducive to meaningful and frank discussions, which is surely a key purpose of such gatherings.

SCOTTISH RUGBY was already in serious financial peril in May 2019, well before anybody had heard of Wuhan. On a rising tide, turnover had gone up a very healthy 74.1% from £35m in 2011 at the start of Mark Dodson’s reign as Chief Executive, to £61m. But Operating Costs had jumped from £33m to £61m (84.1%) over the same period and the operating surplus had sunk to an unsustainable 0.9% of turnover.

As Gordon McKie, Dodson’s predecessor as Chief Executive, pointed out in an interview in the Sunday Times in April 2020: ‘The SRU headcount has grown to 450 from 280 and the annual payroll has nearly doubled’ .

Net current liabilities of £10.4m, with debentures of £34m, set against a £41.5m valuation of Murrayfield, gave cause to major concern, and it is believed that Price Waterhouse only signed off the 2020 accounts once the Scottish Government’s £20m Covid bail-out was confirmed in December 2020.

When challenged about the disproportionality of this payment when compared to other sports such as football, Joe FitzPatrick, the then Minister for Public Health, Sport & Well Being, said: “Rugby’s need was more desperate – they needed this cash just to keep the lights on”.

CVC saved the bacon, but unless there is a sea change away from Scottish Rugby’s current improvidence, the business will be back in financial crisis 10 years down the road, despite having disposed of a very significant chunk of its family silver.

Cut away the fancy packaging, and the bottom line to the 2022 Financial Statements is that Scottish Rugby made an operating loss of £5.5m in the year to 31st May 2022, despite six of the seven matches played at Murrayfield being sold out, and the executive exercising “extremely prudent management of costs” in the face of “considerable incremental other costs related to Covid” which have not been quantified but which apparently comprise of “on-going PCR testing and additional hotel and travel costs” and a “£1.3m increase in utilities bills” from £700k to £2m, which is surprising given that Putin did not invade Ukraine until February.

We are told that “the cost base is largely fixed – excluding current inflationary pressures” which is hardly the case in the outside world, where head-count is a critical factor in cost control, a hypothesis not lost on the RFU who cut over 100 staff in August 2020. 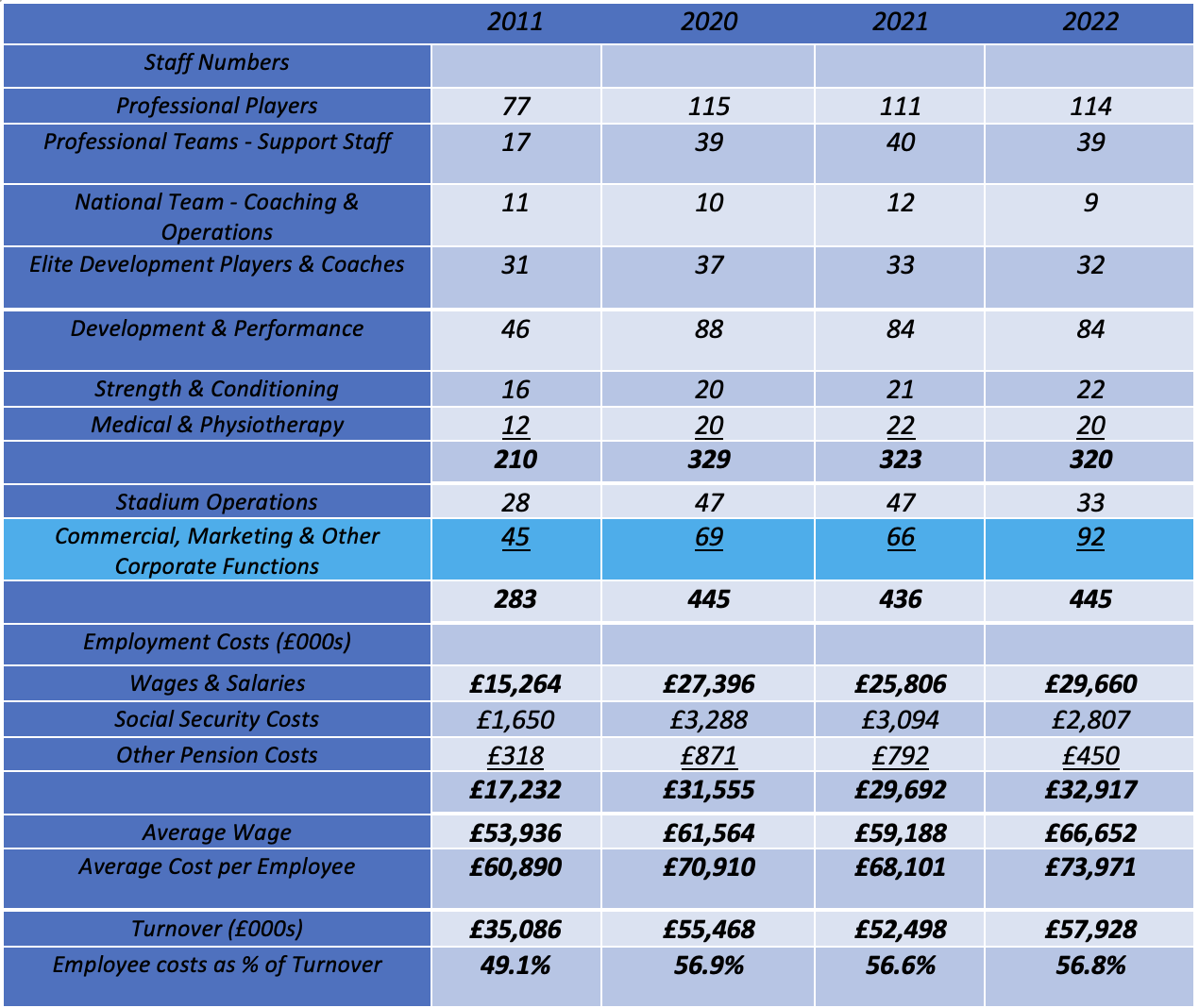 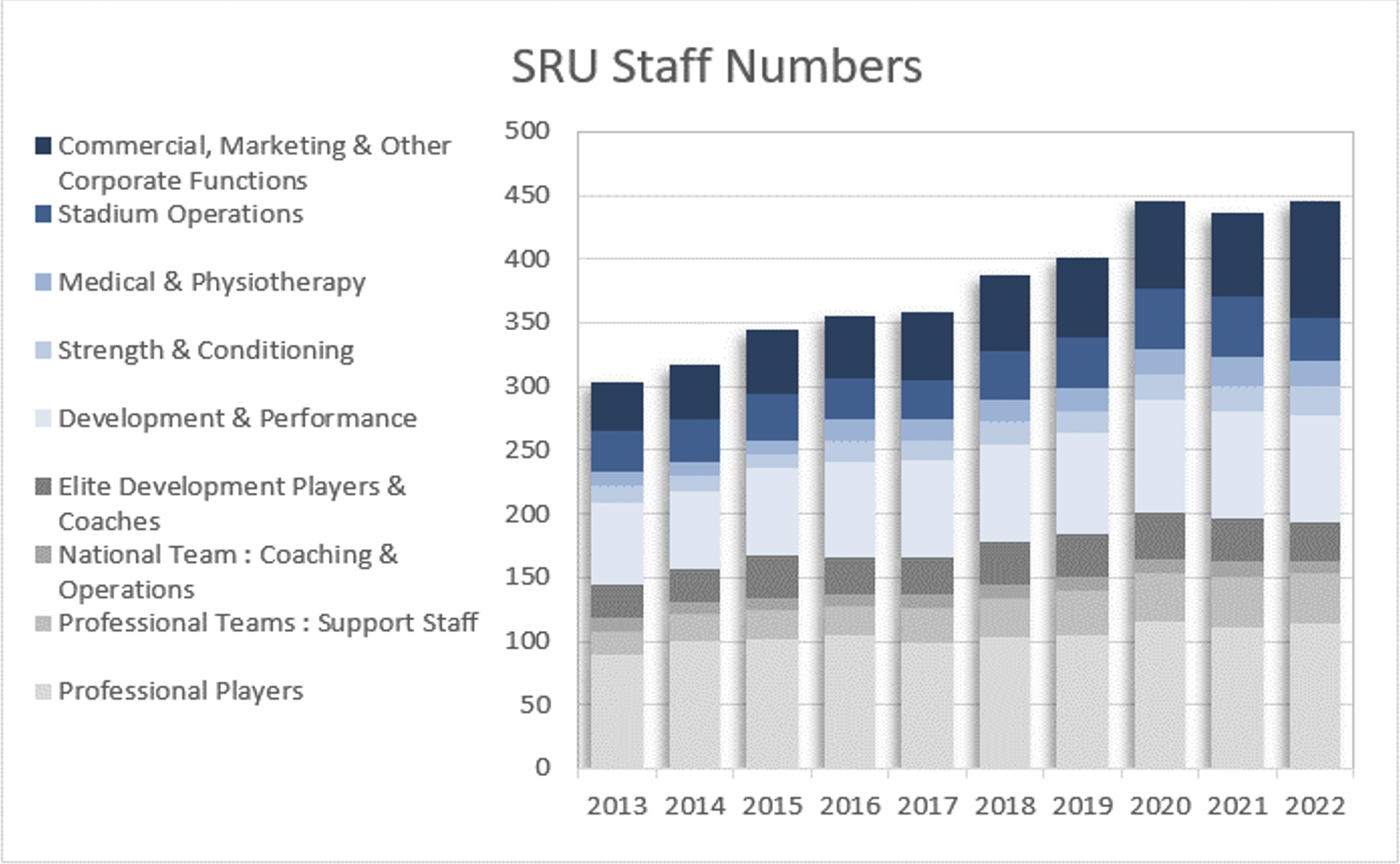 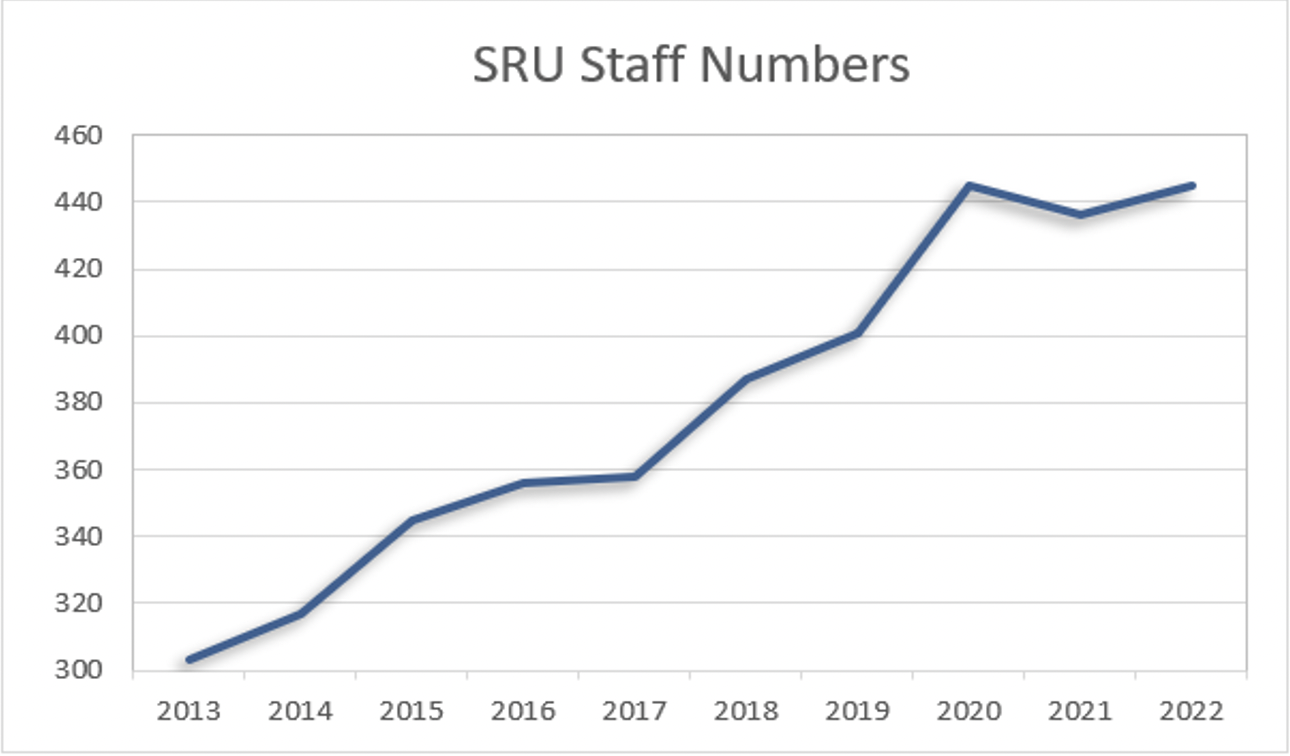 26 people were added to ‘Commercial, Marketing and Other Corporate Functions’ in 2022, which at an average cost of say £40k per person [a conservative estimate given the average cost per employee across the business is £73,971] has added well over £1m to overhead.

Employment costs for the year were 56.8% of turnover, which effectively means that for every £1 that came in the door, 57p went out in wages.

Meanwhile, Mr Dodson continues to be the best paid executive in world rugby, both in money terms (£570k) and as a percentage of total revenue (0.98%). 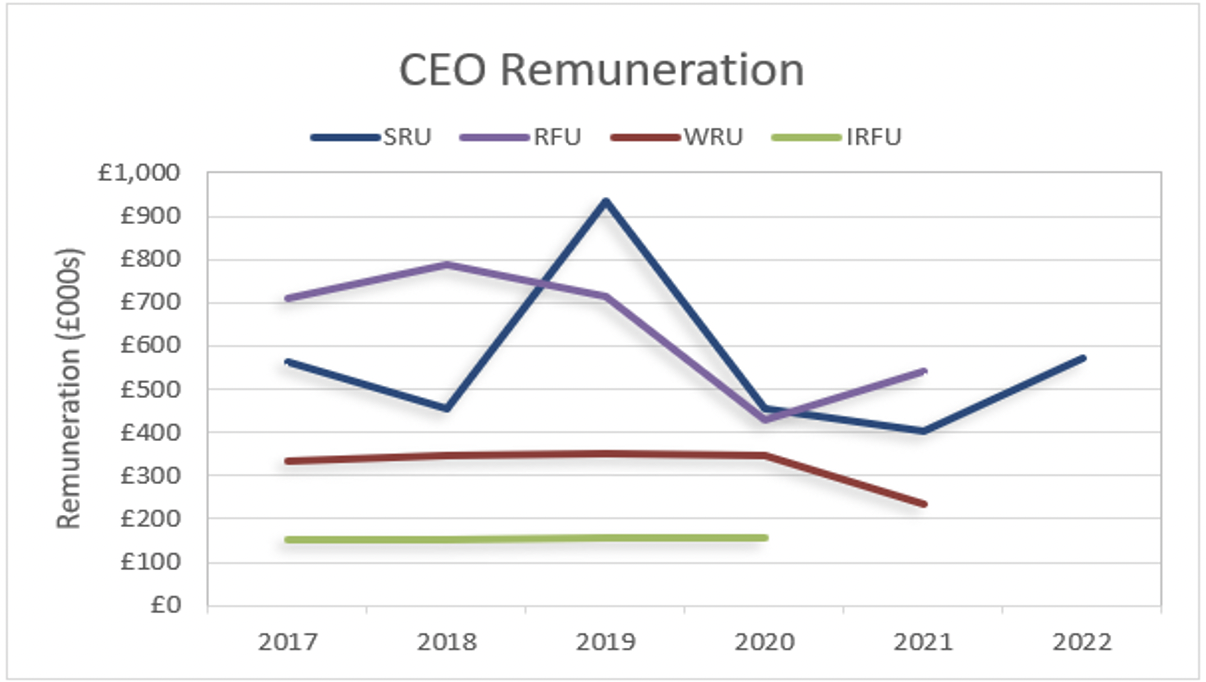 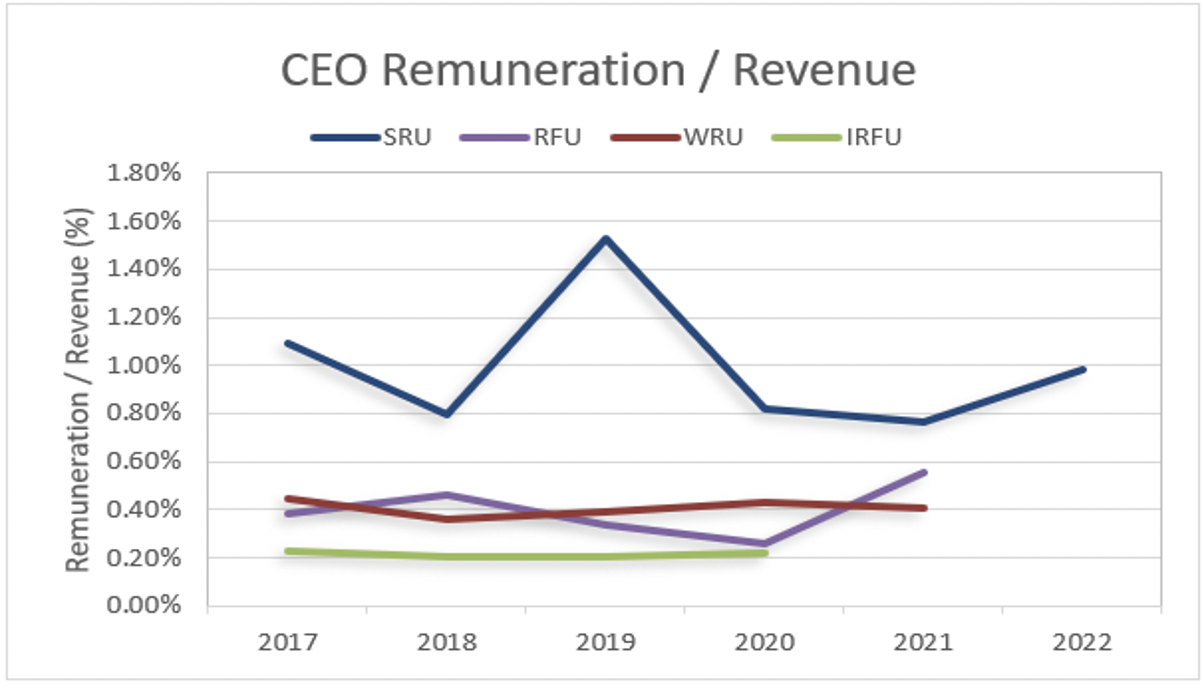 John Jeffrey was paid £36.2k as chairman, plus £22.5k by World Rugby and £15.5k by the Six Nations.
The non-executive and Council member fees were restored to their pre-pandemic level (£15.5k pa) though David McMillan waived his rights for 2021 and 2022 and Julia Bracewell waived hers for 2021.

The Scottish Government’s letter to former Chief Operating Officer Dominic McKay dated 20th January 2021 confirming their £15m Covid Recovery Grant clearly stipulates that this funding was “intended to ensure rugby clubs at all levels of the game across Scotland are better able to cope with the financial challenges that Covid-19 has brought”. There is scant reference to these funds in the Financial Statements but the Annual Report shows £2.15m allocated to Covid compliance, £7.45m used to keep the Murrayfield head-count intact and £2.25m set aside to compensate for years of neglect to Murrayfield stadium – leaving only £3.15m for the clubs, the rightful beneficiaries.

The Lending Facility Agreement for the £5m Scottish Government interest free loan dated 26th March 2021 clearly states that: “The purpose of the credit facility and the borrowings drawn down is to allow the prospective borrower to assist grassroots rugby clubs in Scotland with the damage caused to them as a result of their compliance with Covid-19 public health rules”. The damage caused to the amateur game was by loss of subscriptions, gate money, bar takings and Sevens tournaments, and this facility was surely intended to compensate them in hard cash rather than to be commandeered by HQ to cover their financial obligation to the clubs over the next five years through the Growth & Participation Fund.

The £8.17m allocated to Domestic Rugby and Club Support comes in at 14.1% of turnover.

It does, however, need to be seen within the perspective of the Scottish Government Grant and Loan. Effectively, Murrayfield has paid off the clubs with their own money.

And investment in the grassroots over the past four years, either through the Club Development team or through the Club Support Funds, is a staggering £5.3m shy of the 15% of turnover stipulated as the sum to be directed towards the domestic club game going forward under the new governance structure which clubs are expected to give final approval to at the SGM immediately after the AGM. 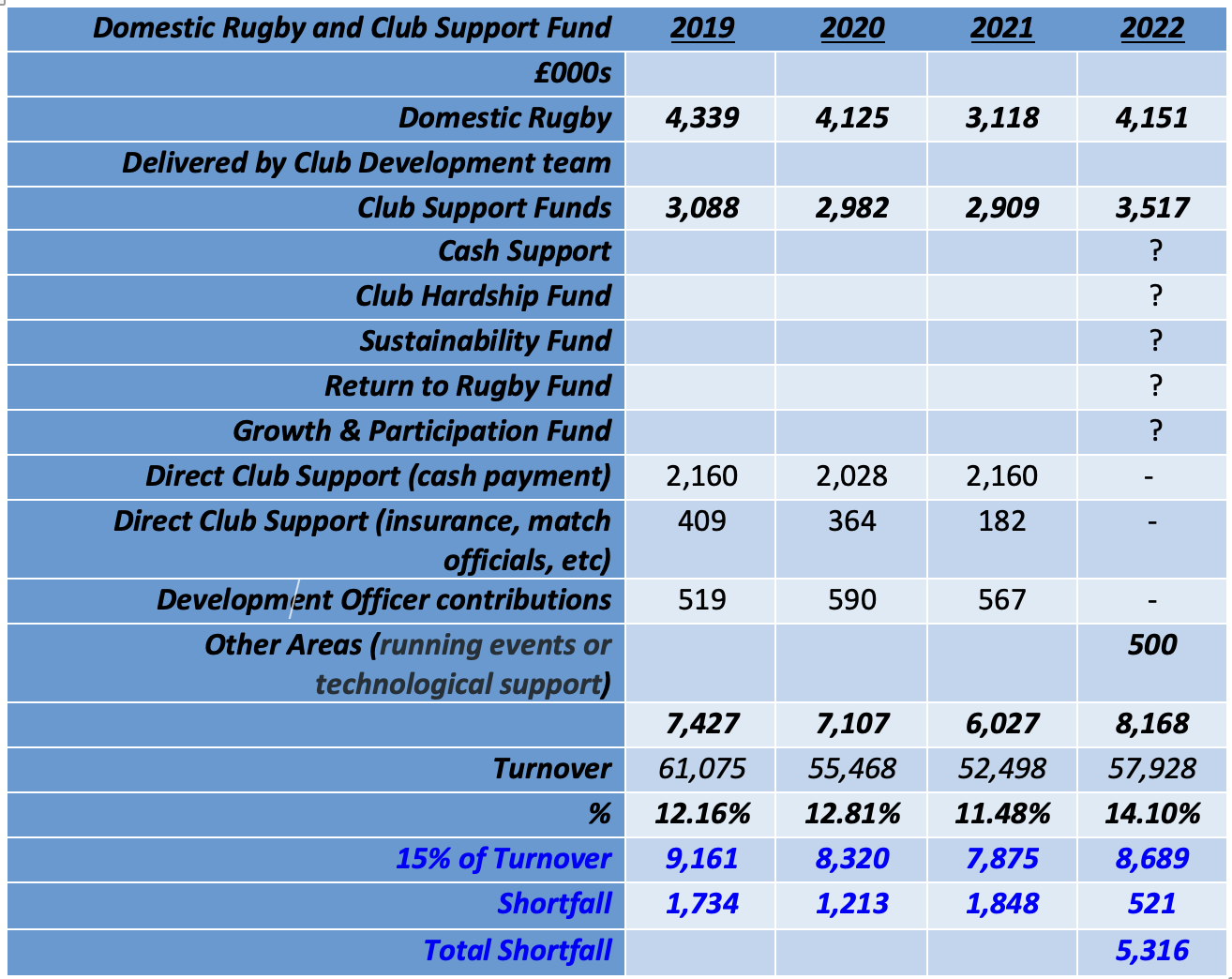 The £549k difference in spend between last year and this year on Performance Rugby “represents investment in the Super6 competition”.

“The financial strategy of the business is to generate sufficient monies from the core business to sustain the sport of rugby in Scotland for the foreseeable future. The core business needs to make sufficient profit in the medium term to look after itself,” says the Annual Report. Sounds good – but it will take much tighter control of overheads to make it happen.

Splitting Strategic Investment out from Core Business works in terms of clarity and focus.

£5.3m has been banked from the CVC/Six Nations deal with a further £7.4m to come in each of the next four years. These funds will also be ring-fenced, and the clubs must insist on the major say in how the cash is expended, since, ultimately, it is still they, the clubs, who own Murrayfield and the Six Nations.

And they must ensure that these funds are not eroded by slack financial management in the core business or nonsensical vanity projects like Old Glory (£881k), as has happened this year.

Dodson assures us that: “The funds generated for Scottish Rugby have been set aside to support capital and operational projects which pay back for the long-term benefit of the business, including improvements in the infrastructure at BT Murrayfield.”

Fine – but player numbers is the single most critical issue facing Scottish Rugby and nurturing the grassroots is a strategic imperative.