SCOTLAND won their first match in the Six Nations since 2010 after a superb performance against Wales at Broadwood Stadium. The Scots last claimed a victory in the tournament over seven years ago when they defeated France 10-8 at Lasswade. They drew against Italy later in that campaign, but since then they have lost over 30 games on the trot. So this is a huge result.

“I am so proud of this team, what a night and we can really build from here. I knew when we went so close against the Irish a few weeks ago that this was coming and the key in this game was composure. We knew going in at half-time that we were still in things and we built from there. This is a big moment,” said victorious captain Lisa Martin.

Scotland started the match well and were awarded a penalty 25 metres out, but the kick from scrum-half Sarah Law fell short. The Welsh team then started to get into things and number eight Sioned Harries was carrying well.

In the 23rd minute a well-worked training ground lineout move then saw hooker Carys Phillips, the skipper, over for the score. Elinor Snowsill, the stand-off, converted and it was 7-0 to the visitors.

Scotland needed something to get them and the crowd going and it came thanks to a superb 50 metre break by full-back Chloe Rollie. The Murrayfield Wanderers player has pace and agility in her locker and it showed that the Scots could cause the Welsh some issues.

However, a good crossfield kick from Snowsill caused Scotland winger Megan Gaffney to touch the ball down under pressure in her own dead ball area, and from the resultant five metre scrum Wales put a lot of pressure on the Scots  and referee Cwengile Jadezweni from South Africa awarded a penalty try. Snowsill converted and it was 14-0 with around six minutes to go until half-time. 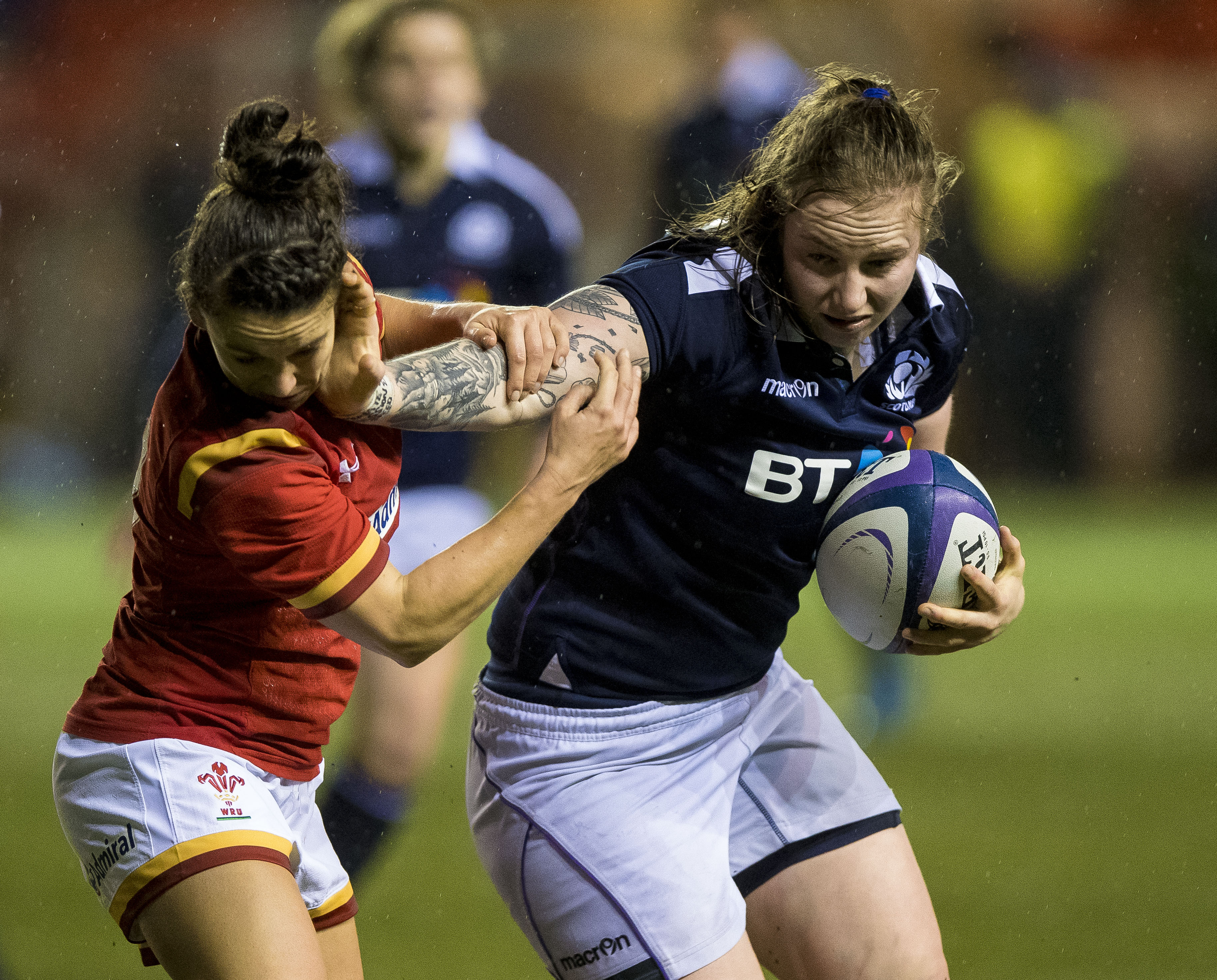 The home side’s heads did not go down though and Rollie had another good run. Then, just before half-time, after two or three minutes of good play, centre Lisa Thomson ran a great line to crash over for a try. Law converted and Scotland were right in this one at the break at 14-7.

The second half started with a bang and both teams were really going for it. Winger Rhona Lloyd had a good break and a few phases later Scotland bagged their second try through the same player. It was her third try in international colours and although hooker Lana Skeldon gave the conversion from out wide a good go, it fell short.

With three minutes remaining Law held her nerve to kick a penalty that edged the hosts, who had been in control throughout the second period, ahead 15-14. Having missed a similar kick against Ireland that took guts.

Then the Scots had to stay calm and defend like their lives depended on it and they did just that to spark deserved celebrations.

Player-of-the-Match: Scotland full-back Chloe Rollie is the country’s best attacking threat and after being starved of ball against Ireland three weeks ago she had some great runs in this one and was a general nuisance for Wales. A real talent.

Talking Point: Quite simply an historic night and one the team and the coaching staff should enjoy. Real potential now to build from here.

About Gary Heatly 238 Articles
Gary has loved rugby ever since he can remember and since 2004 he has covered the sport and others in a professional capacity for many publications and websites and runs his own company, GH Media.

SCOTLAND Men ended up in sixth place at the Commonwealth Games Sevens this evening, equalling their best-ever previous performance. Scotland Women, competing in the Games for the first time, also came sixth in their competition. …

SCOTLAND’s hopes of claiming a medal in the Commonwealth Games Sevens tournament vanished this evening as the men’s squad lost 34-7 to Fiji in their quarter-final. The Scots defended well in the opening exchanges of …