THE Schools East Conference A could hardly have forecast a more exciting finish this season than what is about to unfold on Saturday when Stewart’s-Melville College and Dollar Academy go head to head at Inverleith for the under-18 title. The game should have been played two weekends ago only for Storm Arwen to foil Dollar’s travel plans.

Currently, Merchiston Castle School occupy top spot in the under-18 table on points difference ahead of Stewart’s-Melville, who are both one league point ahead of Dollar Academy. Merchiston, however, have finished their programme of matches and are therefore powerless to prevent one or even both of the chasers from overtaking them.

Whatever the outcome of the game at Inverleith, Stewart’s-Melville College will jump ahead of Merchiston by at least one point, while Dollar will at worst draw level with the Colinton school but would take the title by achieving victory on Saturday.

Gary Callander has died, aged 62, after battle with cancer

As well as being a title-decider, the two teams will be competing for the Grant Mackenzie Cup, while the Jamie Frost award will made to the man-of-the0match. Grant Mackenzie, who sadly passed away was a Dollar Academy former pupil and also a much liked teacher at Stewart’s-Melville College, where he coached rugby. Jamie Frost, a Stewart’s-Melville former pupil, died a year ago.  At Dollar he was an outstanding coach of both cricket and rugby.

The respect both sides have for each other is huge as they prepare for a game with so much at stake. The visitors come into the match on the back of a 40-7 win over Heriot’s last Saturday that came from tries by stand-off Jamie McKillop, scrum-half Evan Rennie, flanker Sam Wallace, second-row Roddy Walker, centre Archie Kelly and wing Aonaich Peden, and five conversions from Wilfie Timney, Heriot’s scoring through a try by No 8  Oscar Jameson converted by stand-off Guy Kirkpatrick, who also kicked a penalty.

Dollar’s coach, Don Caskie, is not feeling over buoyant about his side’s win last Saturday, however. “We can’t read too much into the result and now we’re cautiously looking forward to Saturday in what really is a winner-takes-all occasion,” he said.

For Stewart’s-Melville, home advantage and the prospect of a large crowd at Inverleith on Saturday could be a factor in a match that is being strongly promoted as a ‘must-see’ game. The College had a good work-out against Strathallan last Saturday at Forgandinny, winning 12-0 with tries by wing Rob Henderson and replacement scrum-half Jake Burns, and a conversion by stand-off James Lewis. 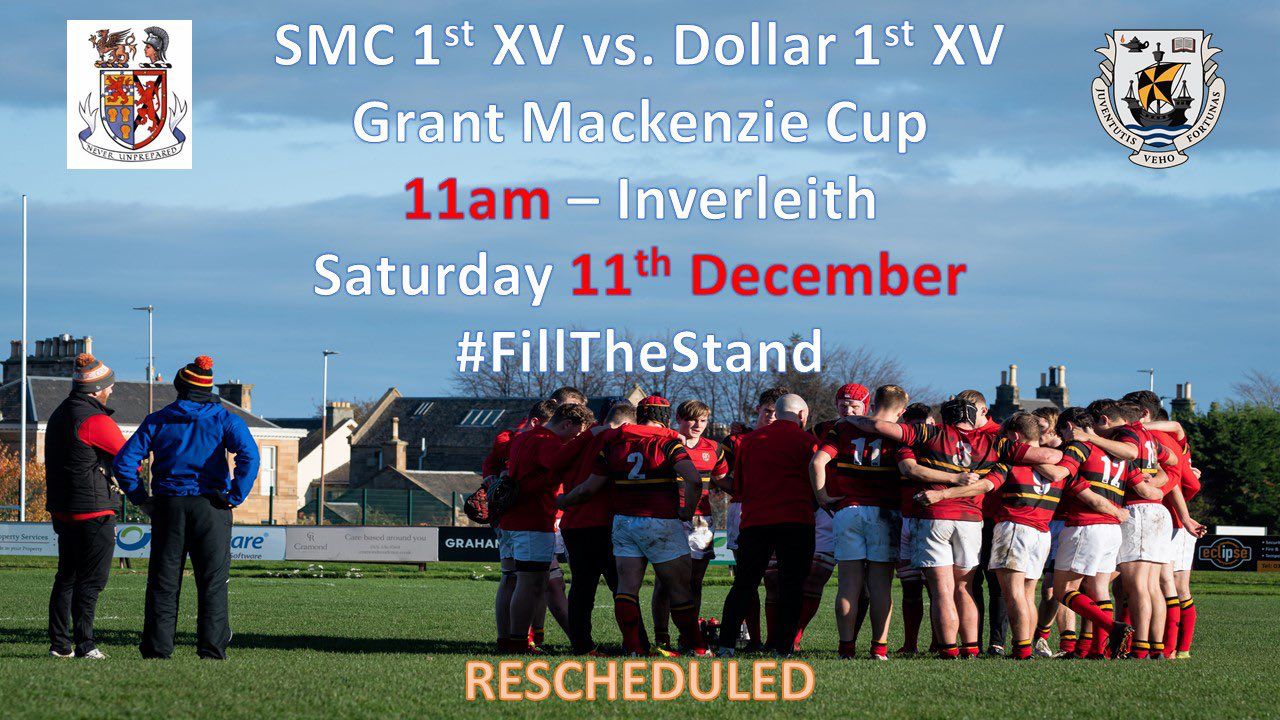 “It was really tough conditions and always hard going up there at this time of the year. I was really impressed with our attitude and defensive effort. This is the third week in a row with a clean sheet and only 22 points conceded across all six games so I’m happy with where we are defensively,” stated Stuart Edwards, the Stewart’s-Melville head coach.

As to Saturday’s shoot-out with Dollar, Edwards echoed what is a feeling of anticipation. He said: “We are looking forward to what promises to be a top-end schoolboy game. We feel grateful to be involved in such an amazing event that honours two super men close to both schools’ hearts who have sadly passed away.

‘Whilst it was disappointing to cancel the fixture two weeks ago, it has given us extra time to prepare coupled with a good hit out against a tough Strathallan side at the weekend. We are as well-prepared as we possibly can be and look forward to welcoming Dollar to Inverleith on Saturday. We hope to have a big crowd down to celebrate the occasion”.

If the spotlight is on Stewart’s-Melville and Dollar this Saturday then last weekend it was George Watson’s College and Merchiston Castle School who were centre stage in both schools’ final Conference match of the season.

In the event, Merchiston produced a powerful and accurate performance at Myreside to win 19-0 with tries from Isaac Coates, Glen Crawford and Tom Currie, and two conversions from Matthew DeVilliers.

“We were delighted to finish our conference block with a strong team performance,” said Merchiston’s coach, Roddy Deans. “We played with real tempo and ambition in the first half which allowed us to score two well worked tries. We have been improving with each game this year, so it’s pleasing for the boys to feel their progressions first hand. Our defensive attitude and work-rate has been on point this year and to stop them scoring was particularly pleasing. We look forward to getting a well earned break before the Scottish Cup kicks off in January”.

For Watson’s coach Mike Ker, there was recognition that Merchiston are running on high octane fuel right now. He commented: “We were just beaten by a better side, with some excellent players – not least Currie and the other back-rowers. Merchiston played some accurate and composed front foot rugby with excellent go forward and offloading from their forwards. We struggled to match their aggression in the contact area and therefore struggled for decent attacking possession. But credit to my guys, they never gave in, and worked hard for each other especially in the second half.”

In the other East Conference A match played, Edinburgh Academy emerged 23-17 winners over Fettes College thanks to two late penalty goals skipper Ross Cadzow, despite playing much of the match with 14 men after incurring a red card. Academy’s tries came from Toby Edwin and Oli Duncan (2).

“It was great to finish with a win, but after scoring early, it was possibly our worst 30 minutes of rugby we’ve played this season,” suggested Edinburgh Academy’s coach, Chris Martin. “I have to take my hat off to how the players responded to our early red card. Their defence and game management was excellent in the second half, playing in front of what felt like all of Fettes College on the touch line.

“Ross Cadzow showed outstanding leadership and decision-making to slot two late penalties from 45 metres out to win the game after being 10 points down at half time.”  For Fettes, skipper Lochlann Nairn scored a try and added a penalty goal, the other points coming from a penalty try.

In club rugby, the top match this weekend will be the postponed fixture between Mackie and Boroughmuir in Stonehaven, which was called off two weekends ago because of concerns over travel following the havoc wreaked by Storm Arwen.

“We expect next weekend’s game against Mackie to be a tough game, especially with Mackie playing at home,” noted Scott Anderson, the Boroughmuir coach, whose side travel to Stonehaven after a 33-0 win over GHA at Braidhom last Saturday.

“The match was a bit stop-start, with a lot of scrums and line-outs, so we never really got any fluency into our game despite the result. But it was a good contest for us and helps continue with the progress and development of the whole squad,” stated Anderson.

In the Borders Semi Junior League, the top billing game between Gala Wanderers and Tynedale was foreshortened because of deteriorating weather conditions at Netherdale ,and resulted in a 29-7 win for the young maroons, whose tries came from wing Ciaran Corcoran, stand-off Russell Kerr and wing Gregor Collins (3).  Russell Kerr landed two conversations.

Elsewhere, Kelso Quins lost 27-22 away to Morpeth, Quins scoring through two tries by Logan Edgar and one apiece from Murray Woodcock and Ashton Asante. There was frustration for Melrose Wasps whose game away to Alnwick could not go ahead, and also for Hawick Youth who were denied their game against Duns because the Berwickshire team had insufficient numbers. However an unofficial match went ahead between a Hawick Youth ‘development’ team and a  combination of Jed and Duns players which the hybrid side won 22-10. Another match that was ended prematurely because of the foul weather on Saturday was at Selkirk where the home youth side drew 15-15 with Peebles.

THE OFFSIDE LINE’S coverage of grassroots, youth and schools rugby is supported by MACRON STORE EDINBURGH (COLIN CAMPBELL SPORTS). Click HERE to contact the team for information on how they can help with your club or school’s kit supply demands.
About Alan Lorimer 239 Articles
Scotland rugby correspondent for The Times for six years and subsequently contributed to Sunday Times, Daily and Sunday Telegraph, Scotsman, Herald, Scotland on Sunday, Sunday Herald and Reuters. Worked in Radio for BBC. Alan is Scottish rugby journalism's leading voice when it comes to youth and schools rugby.

EDINBURGH completed a clean sweep in the FOSROC Under-18 District Series on Sunday, defeating Caledonia 40-14 in the third and last round of the competition at Netherdale. The capital side’s grand slam had been expected …

Opinion: success is cyclical for Scotland at Under-20s level but there is always room for improvement

14 successive defeats is a depressing statistic but does it mean a bleak future at this age level? Alan Lorimer considers the ramifications of this season’s results. …