OCTOBER is often cited as the best month for playing rugby, but for schools this claim is rarely tested, because the tenth month of the year is also a time when educational establishments have their half-term breaks.

The trouble is that these holidays are not only of varying lengths but, crucially, also occur at different times during October, making fixture planning a nightmare for organisers at the sharp end and leaving large parts of the month stripped of rugby.

So, the announcement that Merchiston Castle School in Edinburgh were to go ahead with what will be their second Under-18 Rugby Festival this coming Saturday and Sunday in many ways fills the void.

But it is much more than merely solving an October fixture difficulty as Roddy Deans, Merchiston’s Director of Rugby, explains.

“This is a chance for schools and clubs in Scotland to challenge themselves tougher and different opposition.This tournament is not about Merchiston; it’s about helping to grow the game in Scotland,” says Deans, who got the idea of creating the Festival after attending a similar type of tournament in England.

“For a number of years Merchiston and several other Scottish Schools travelled to Ipswich to play in the prestigious St Joseph’s tournament. It was a great experience for the boys and certainly took them out of their comfort zone. They were able to challenge themselves against better players from some of the top rugby schools in the UK.

“I then began to think: ‘Could we do a similar tournament in Scotland, one that would give Scots to play at a higher level?’”

It is expected that Colston’s College, who supply a steady stream of boys for the Bristol Academy will be strong, their results this term suggesting that the West Country side are shaping up well. Also going well this season are Uppingham School, where former Scotland centre Nick de Luca is the Director of Sport, and  ex-Glasgow Warriors and Scotland lock Andy Hall his assistant. 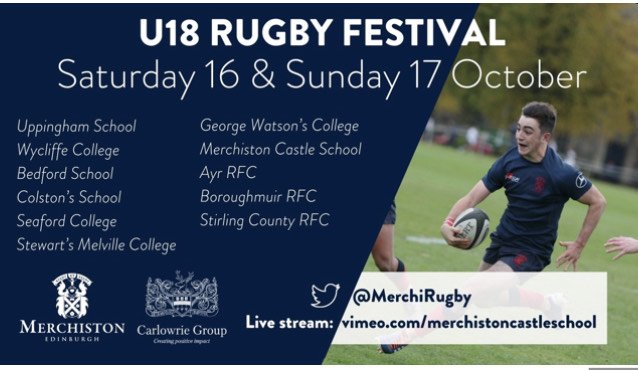 Merchiston will go into their own tournament having had a tough outing against Stewart’s-Melville last Saturday in East Conference A, when a tight game resulted in a 3-7 defeat for the Colinton school, with the Inverleith side’s winning try coming from winger Finn MacFarlane, converted by centre Benjamin Roger.

The other game played in this Conference was at Fettes where George Heriot’s School achieved a 34-12 win over the home side. Lock Ruari Shand, full-back Jack Martin (2), prop Jack Cruikshank, centre Hugh Mackay and wing Daniel Hood scored the Heriot’s tries, two of them converted by stand-off Guy Kirkpatrick.

In the Borders Semi Junior League,  Hawick Youth continued their unbeaten run with a 24-14 away win against Alnwick. Fergus Bell scored a brace of tries for the young Greens while Martin Goldie made a single contribution. All three tries were converted by Owain Gray, who also kicked a penalty goal.

There was another victory, too, for Earlston HS/Melrose Wasps, who overcame a physical Tynedale side at The Greenyards to win 15-5. Stand-off Luke Townsend, winger Michael McPherson and prop Robbie Robinson scored the Wasps’ tries. Meanwhile Gala Wanderers showed good form in defeating Morpeth 19-10.

Arguably the match of the day in the Borders Semi Junior league was at Hay Lodge Park where Kelso Quins achieved their fourth straight win to remain undefeated with a 23-17 victory over Peebles Colts. For Quins, who were outstanding in defence, forwards Harry Grant and Daniel Ball scored tries, stand-off Archie Barbour adding the conversions and kicking three penalties. Peebles Colts’ touchdowns came from Ruaridh Smith, Ewan Hunter and Cammy Boak.

In the absence of conference matches, Ayr and Marr played a friendly on Saturday, with the former winning 26-14 thanks to tries from flankers Callum Hamilton (2) and Jake Leatherbarrow, hooker Fraser Carswell and three conversions from playmaker Scott Watson, to give Ayr a timely boost ahead of this weekend’s big test at Merchiston.

About Alan Lorimer 193 Articles
Scotland rugby correspondent for The Times for six years and subsequently contributed to Sunday Times, Daily and Sunday Telegraph, Scotsman, Herald, Scotland on Sunday, Sunday Herald and Reuters. Worked in Radio for BBC. Alan is Scottish rugby journalism's leading voice when it comes to youth and schools rugby.