THIS roller-coaster ride of a rugby match ended in high drama and the cruellest of heartbreak for Dollar – who sensationally grabbed the lead with just two minutes left on the clock through a Charlie Dineen try, but then shot themselves in the foot.

All they needed to do was collect the kick-off and wind down the clock, but panic set in and the ball was sent to touch a few seconds before the final whistle – and worse still it was kicked diagonally backwards to gift Stew-Mel a line-out five yards from the Dollar line.

The ball was cleanly collected and after a couple of frantic phases, loosehead prop Rory O’Hara burrowed over for the decisive score. This was Stew-Mel’s first Cup success since 2011 and will go a long way to alleviating the pain of losing out on the Red Conference title this season during the last round of matches.

For Dollar, the anguish of defeat will be multiplied tenfold by the knowledge that victory was theirs for the taking and they let it slip through their grasp in such calamitous style. Their misery will be compounded by the fact that this group of players lost the Under-16 Cup Final two years ago, and the Under-18 Cup Final to a late score versus George Watson’s last season. Murrayfield has not been a happy hunting ground.

For all the cruelty of the way it happened, Stew-Mel were worthy winner. They won the try count 6-4. The vision and confidence they exhibited across their backline when attacking gaps made them a joy to watch. Winger Jacob Lineen claimed three tries, had two more

scintillating breaks, and clearly has a lot to thank his mother for in terms of the sprinting genes he has inherited. Openside flanker Connor Boyle is a ferocious competitor who thoroughly deserved the man-of-the-match accolade.

Full-back Ben MacIlwraith and stand-off Grant Hughes caught the eye in the Dollar backline; whilst in the pack, tighthead prop Euan McLaren was a powerhouse, and second-row Jonathon Davies put in a huge shift.

“I really feel for the Dollar boys. It was a great game for the neutral but not so good for the coaching team or the players on either side. I didn’t watch that last line-out, I just heard the cheer when we won. I’m delighted it went our way,” said victorious coach Bryn Lockie.

Reece McAllister scored a try in eight minutes to give Dollar an early lead after a quick tap from Gus Warr caught Stew-Mel on their heels. McIlwraith added the conversion; then, in the 19th minute, Jacob Lineen grabbed the first of his three scores to bring the Edinburgh side back to within two points.

A McIlwraith penalty extended the gap between the sides slightly; Lineen tied it with his second try; then a converted score from Davies on the stroke of half-time gave Dollar the lead at the turn.

Another McIlwraith penalty early in the second half kept the scoreboard ticking  over for Dollar, but Jack Blain was not going to let Lineen have all the fun on the right wing, and his try after a glorious break down the left touchline demonstrated that Stew-Mel have serious firepower on both sides of the park.

Dineen struck back almost instantly to restore Dollar’s ten point advantage, only for Lineen to grab his hat-trick try, which was excellently converted from the touchline, to make it 25-22 with just over 20 minutes still to go.

Boyle got the ball down after some powerful and disciplined tight play to put his team in front for the first time in the match with only seven minutes left on the clock, but it looked like Dollar would have the last laugh after Dineen grabbed that score in the 68th minute – however, it wasn’t to be.

“It is the third year we’ve got incredibly close and it is heart-breaking. It was a mistake at the end but we won’t dwell on that single moment, we can all be incredibly proud,” said Dollar director of rugby Don Caskie. 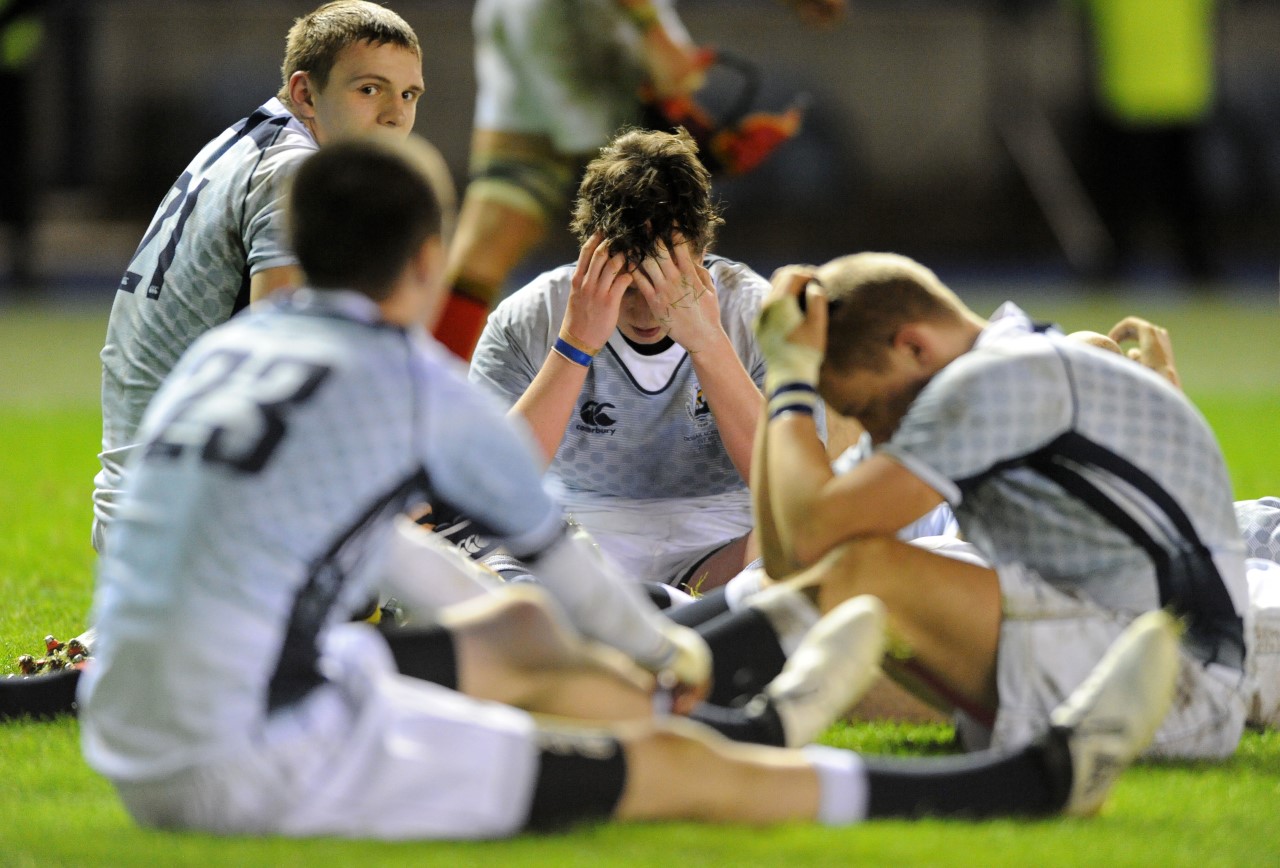 Stew-Mel had emerged 41-0 victors when the two sides met just over a month ago. Dollar had a few key players missing that day so this was always going to be a tighter contest – but nobody could have expected it would be quite as tense as this.

“We felt that we had the firepower to beat them – or at least compete with them. It was [a game between] two fantastic sides and somebody had to lose, unfortunately. But what a great advert for schoolboy rugby both in defence and attack. Nobody gave a yard. I would say that was the best performance by both these sides this season,” added Caskie.

“Our boys will be absolutely devastated, but our job is to pick them up and help them learn from it – and hopefully we’ll come back stronger.”

Round-up: Strathallan defeated Glenalmond 36-19 in the Under-18 Shield Final; Hutcheson’s Grammar School won 23-18 against High School of Glasgow in Plate Final; and Morrison’s Academy were 39-15 victors over Bell Baxter High School in the Bowl Final.

THE OFFSIDE LINE’S coverage of grassroots, youth and schools rugby is supported by MACRON STORE EDINBURGH (COLIN CAMPBELL SPORTS). Click HERE to contact the team for information on how they can help with your club or school’s kit supply demands.
About David Barnes 3183 Articles
David has worked as a freelance rugby journalist since 2004 covering every level of the game in Scotland for publications including he Herald/Sunday Herald, The Sunday Times, The Telegraph, The Scotsman/Scotland on Sunday/Evening News, The Daily Record, The Daily Mail/Mail on Sunday and The Sun.

Workshops, online support, summer camps and a digital campaign will promote the benefits of playing prop or hooker …

St Aloysius’ College in the Shield, George Heriot’s School in the Plate and Morrison’s Academy in the Bowl claim the spoils …