1. Which team will spring a surprise?

Last time out it was the Brave Blossoms who stunned the watching world by beating the Bokke, and deservedly so, although it meant they were on their knees when facing Scotland four days later.

In looking for the next giant killer there are a handful of potential candidates. Samoa in Scotland’s pool usually have one great game in them and they almost did for Vern Cotter’s side four years ago in Newcastle.

The USA will come fully loaded and may push Argentina or France in Pool 3. while perennial underdogs Fiji have enough natural talent to ruin the World Cup for either Wales or Australia.

2. Is this the year for a new World Cup winner?

In case you were in any doubt, the answer is almost certainly no. There have been four winners to date and New Zealand, South Africa and England remain the favourites to lift this cup with the Wallabies trailing behind in the bookies.

The amount of time and money, effort and expertise required to join the elite of the sport is prohibitive for any Johnny-come-lately, flash-in-the-pan side that enjoys a run of luck as can (occasionally) happen in footer.

3. Which referee is going to stuff it up this time?

A good official is an anonymous one and even Nigel can grate a bit now he is slow and prone to the odd howler. The World Cup has a habit of focusing the spotlight upon match officials largely thanks to the multitude of laws that are open to interpretation.

Craig Joubert did not cover himself in glory last time out when he made the wrong call in Australia’s favour by incorrectly penalising Scotland prop Jon Welsh in the quarter-finals.

Back in 2007, Wayne Barnes lost any Kiwi friends he may have had after taking a Nelsonian look at a French forward pass in the build up to a crucial try in that utterly unexpected quarter-final win over the Blacks and, while this wasn’t in a World Cup, Romain Poite interpreted the accidental offside law in a unique manner to ensure the B&I Lions drew the Test series with New Zealand in 2017. (Incidentally, wasn’t he correct? Shouldn’t an accidental offside, and it’s tough to ignore the ball when it flies towards you, result in a scrum rather than a penalty?)

4.  Might red cards win key matches or, to be more accurate, lose them?

All teams prepare to play with 14/13 men and you can see why with World Rugby holding the refs’ feet to the fire over any contact around the head area. Already two locks have had a question mark over their participation: France’s Paul Gabrillagues who had his six week ban halved, which brings him into line with Scott Barrett of the All Blacks who copped a three week sanction for a shoulder to Michael Hooper’s melon.

There can be no compromise when it comes to player safety but players are still on a steep learning curve and, in the heat of battle, desperately tight margins leave zero wriggle room for even miniscule errors of judgement.

If you fancy a wager, don’t be short red cards.

Looking back over the years there has usually been one or two players whose name became firmly associated with each tournament.

1987: John Kirwan ran riot and through the entire Italy team, twice, to score a length of the field try.

1991: David Campese was the tournament top scorer but he slapped down an England scoring pass to help the Wallabies lift the Cup.

1995: Jonah Lomu announced his arrival on the world stage, although rugby’s first superstar was still shaded by Nelson Mandela in a Springbok shirt.

2003: Jonny Wilkinson became a global superstar by dropping England to glory off his wrong peg.

2007: The Springboks’ fielded a centre the size of a lock, Frans Steyn made his name in France.

2011: The irrepressible Piri Weepu eased the nervy All Blacks’ into the final but it was Stephen Donald whodropped his fishing rod to kick the winning points.

Of course, rest and recuperation is key in international rugby so who does the draw help/hinder? 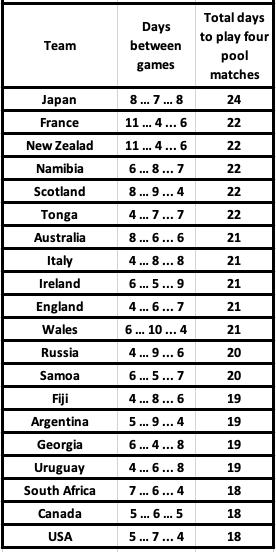 19: Samoa…Kiwis by birth, Samoan by ancestry.

14: Scotland (although Johns Barclay was born in Hong Kong he came through the domestic Scottish system)

8: Italy & Wales … all sorts with Italy, and English-born Welshmen for Wales

7: England … including two Vunipolas, one Tuilangi and one Cokanasigna, all three with Pacific Island ancestry

1: Georgia, Russia & South Africa … who boast the “Beast” from Zim.

0: Congrats to Argentina, Namibia & Uruguay … who produce all their own players.

And finally … OUR WORLD BEATERS XV … who won’t be in Japan!

One day the brilliant Kiwi will light up the World Cup, just not this one.

Los Pumas must have some handy wingers if they can overlook this livewire.

Fisty McFighty is unwanted by England for some odd reason?

Excess to the All Blacks despite being the same size as a small rhino and about as easy to halt.

It is possible he burnt his bridges by joining London Irish for the coming season.

Injured in the warm up, although Dan Bigger is a pretty handy replacement.

Overlooked for Kiwi Willy Heinz and none too pleased about it either.

Short of a gallop after injury issues. May yet feature.

Injured, overlooked and over the hill.

Unlucky, but perhaps the All Black centurion and scrum anchor is too quiet about the field.

Constant injury issues have knocked the competitive stuffing out of big Richie who misses his last realistic World Cup chance.

Overlooked in favour of South African “project” Jean Kleyn, which has caused an almighty stink across the water.

Unwanted by the Blacks and now overlooked by England.

An odd decision since Los Pumas haven’t exactly knocked it out the ball park without their foreign mercenaries.

Had he been fit we might have fancied Wales to do something special. But he isn’t. So we don’t.

About Iain Morrison 80 Articles
Iain was capped 15 times for Scotland at openside flanker between his debut against Ireland during the 1993 Six Nations and his final match against New Zealand at the 1995 World Cup in South Africa. He was twice a Cambridge ‘Blue’ and played his entire club career with London Scottish (being inducted into the club’s Hall of Fame in 2016). Iain is a lifelong member of Linlithgow Rugby Club. After hanging up his boots, he became rugby correspondent for The Sunday Herald, before moving to The Scotland on Sunday for 16 years, and he has also guest written for various other publications.

Doddie Weir: a life well lived and a legacy that won’t be forgotten

Cam Redpath ready to kick on after injury-ravaged 18 months

Premiership: Glasgow Hawks even the score against city rivals GHA

Premiership: Marr see off Heriot’s Blues with second half surge