With the 2017 British and Irish Lions tour of New Zealand only months away, this is a retrospective of the last tour there. Jeff Connor, former chief rugby writer for the Scotland on Sunday newspaper, followed the tourists throughout. His book, ‘One Knight, Forty-Five Lions: With Sir Clive Woodward in New Zealand’ was, for various reasons, never published. But it was written and here, exclusive to The Offside Line readers and in full gory detail, is the untold story of the Lions, 2005.

The tour as a whole is disintegrating. The day started well when Dave Gibson and I went to welcome Scotland flanker Jason White – replacement for the small army of injured back-row players – at the airport. Despite the 24-hour flight, Jason is in fine form though probably a bit baffled to discover that the only two people there to meet him are a journalist and a snapper. No-one from the Lions management bothered.

The Woodward press conference in Wellington’s James Cook Hotel a couple of hours later was even more alarming. The room was invaded by drunken punters, one of them a doctor from Dublin notorious as a sort of professional gate-crasher. Many journalists remember him from the 1993 tour when he appeared from nowhere to grill Gavin Hastings about what the captain was going to do about the Lions midfield. Now he has four or five mates who wander round without even bothering to pretend to look or act like journos. One interrupts an interview with Paul O’Connell to ask him to sign a Lions jersey. Even more alarmingly Bravo 1, 2 and 3, there to save everyone from this sort of thing, sit on their arses while chaos reigns around them. Even Campbell seems to have given up, though fellow Press person Louisa Cheetham refuses to be distracted from her duties and moves a cameraman away so he can’t take snaps of the back of Clive’s head.

One other thing does come out of the Woody press conference: the Lions will challenge the Haka before kick-off, despite the O’Driscoll incident. This time new captain Gareth Thomas will be leading the response. It does seem odd that pre-match planning should involve this and I was tempted (but chickened out) asking: ‘Tell me Clive, if Gareth is injured in the first minute will you desist from challenging the Haka in the third Test?’ 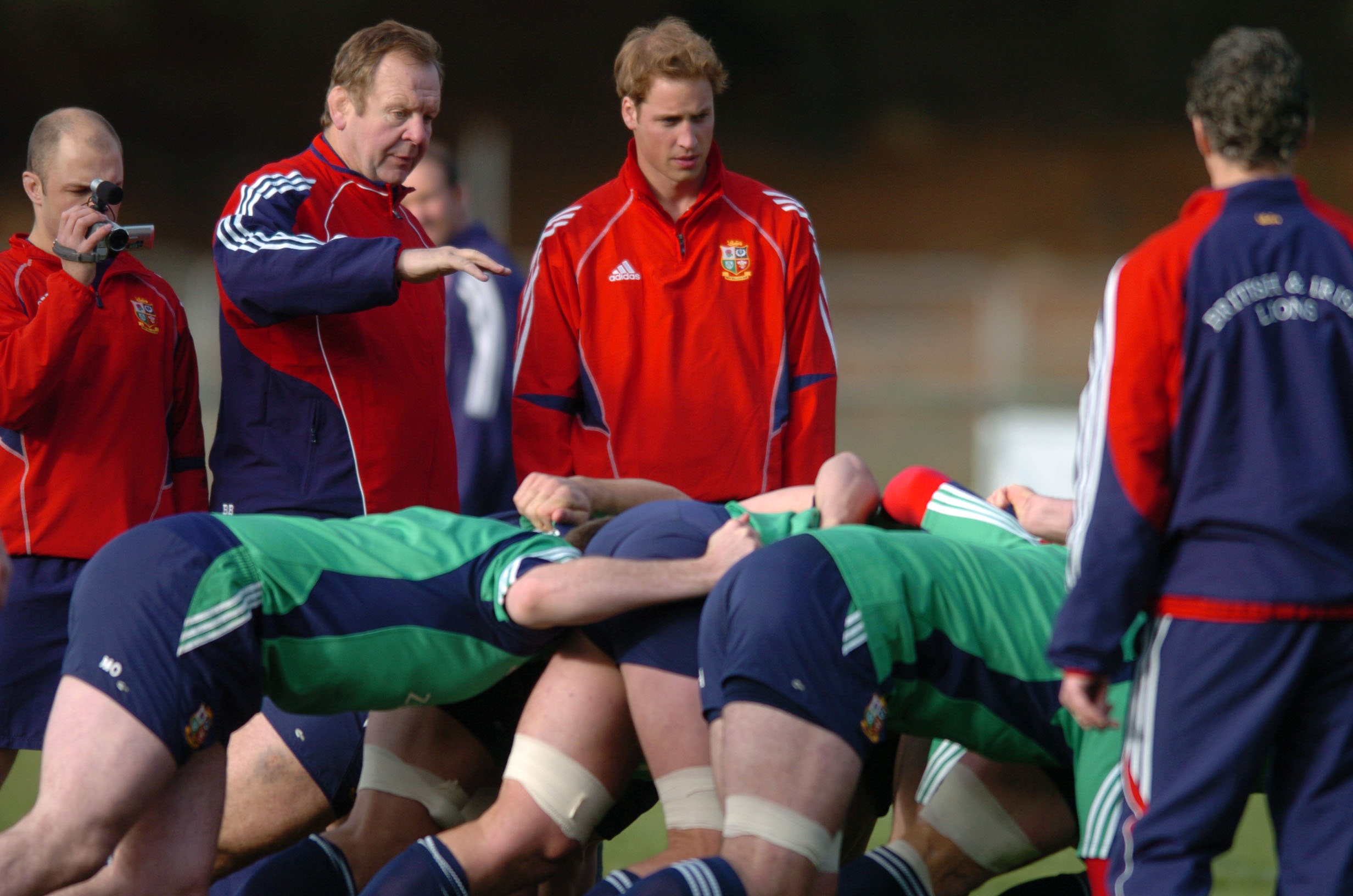 On the same day that Graham Henry posts three like for like changes from Christchurch – Rico Gear for Doug Howlett, Mils Muliaina for Leon MacDonald and Byron Kelleher for Justin Marshall – Woodward announces his team for the Second Test. Some thought 11 changes demonstrated his newly-acquired boldness while many saw it as pure panic. Either way, potential Lions stories were forgotten as snappers and hacks headed off to Basin Reserve for an ‘impromptu’ event. This turned out to be 23-year-old Prince William, who had turned up in a Lions tracksuit with a small army of security, along with No.10 Charlie Hodgson and kicking coach Dave Aldred. Wills duly proves that rugby was never going to be his game and there are complaints that Aldred might have better things to do with a Second Test three days away. Others, myself among them, thought it a pleasant change from non-stop Umaga/O’Driscoll imbroglio. No such luck. A writer on The Dominion Post – a sort of New Zealand Sun without the finesse or talent – announces, like a party piece from the Kremlin, that: “The outrageous claims of O’Driscoll and Sir Clive Woodward against Umaga and Keven Mealamu were clones of Prime Minister Tony Blair and his media adviser Alastair Campbell making their extravagant, accusatory and inaccurate claims about Saddam Hussein’s weapons of mass destruction. Just as Blair was the aggressor in the invasion of Iraq, the Lions have been the aggressors in their invasion of New Zealand.”

There were several memorable moments to remember from the Second Test, though none of them positive for supporters of the Lions.

There was a feeble hoorah in the Cake Tin Press box when Gareth Thomas caught the ABs sleeping and crossed under the posts in the second minute, but everyone here could recognize a false dawn when they saw it. Thomas’s usual clownish celebration – a la O’Driscoll in his early days or England wing Dan Luger – didn’t seem a wise thing at the time – and so it proved. 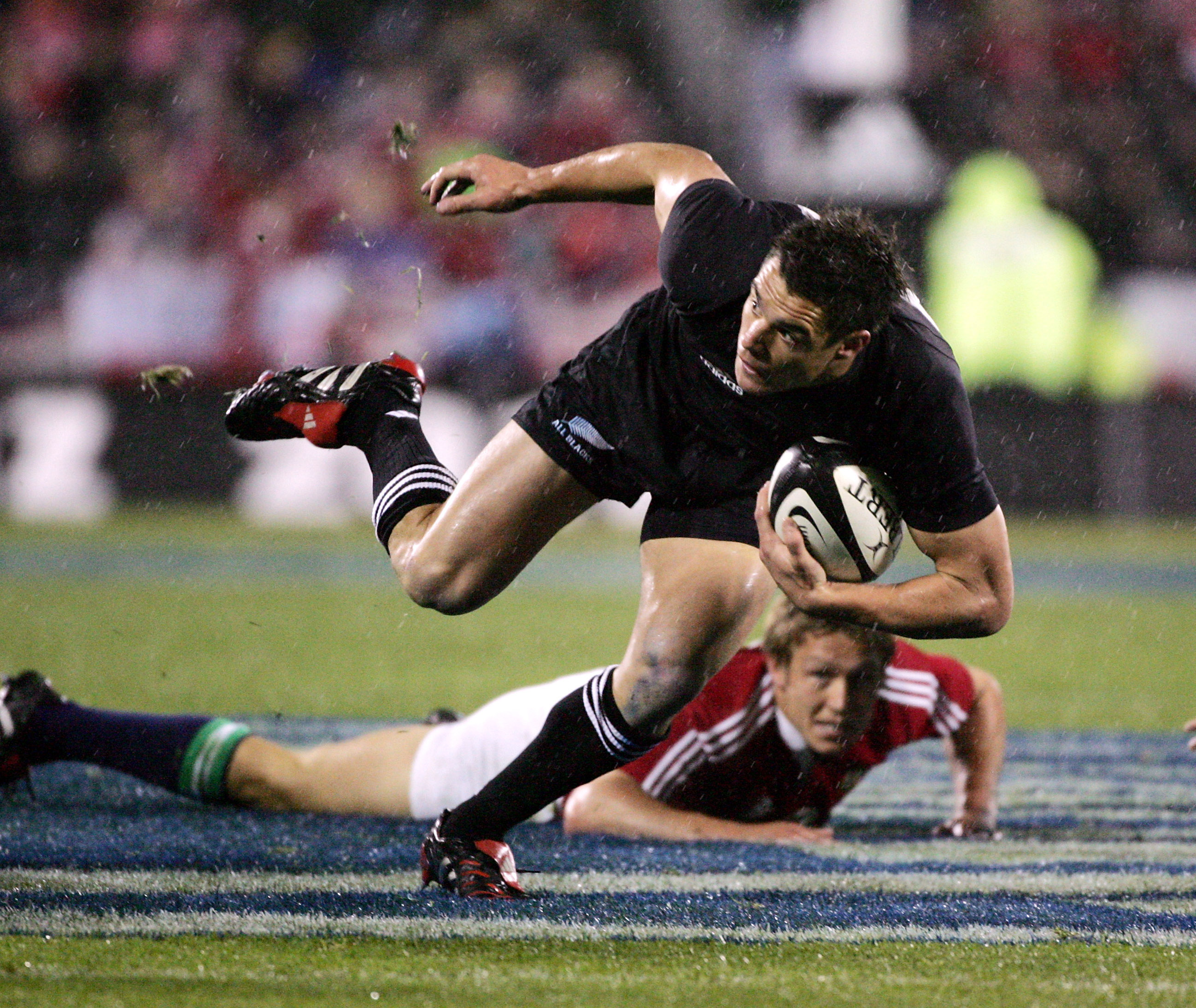 The final score was 48-18 though, if you prefer it, Dan Carter 33 Lions 18. It reminded me of a ODI cricket headline I wrote for the Daily Star 21 years previously: Viv Richards 189 (not out) England 168 (all out) and Carter’s dominance against the Lions was just as embarrassing. It struck me, too, that it wouldn’t be too long before most wings would have to be built like centres or even back-rows (as the All Blacks already are). It was not his fault, but Shane Williams was a liability and the All Blacks had worked out that all they had to do was for his opposite number to hold him up while someone else took the ball off him.

There was certain ugliness about the affair, too. Woodward was booed, by Lions and home fans alike, while All Blacks No.8 Jerry Collins found it necessary to make a fuck-you gesture at visiting fans. As if the defeat wasn’t bad enough the whole of the Lions Press were forced to make a walk of shame down from the Press box to the playing field below in full view of caterwauling AB supporters. It was a depressing and stormy night in every sense of the word.

In the light of this, the publisher’s decision that a series defeat was not going to sell him books and another mini-stroke the day after the second Test I decided I would watch the Third Test from the safety of my hotel room. I couldn’t even raise the energy for that.

The weather is almost balmy the day the Lions fly out in their twin Jumbos. The home press says farewell in the manner we have become used to.

‘Is Sir Clive a psychopath?’ demands the New Zealand Herald.

AFTERTHOUGHT: On the eve of the First Test in Christchurch, the 24-hour New Zealand Rugby Channel, presumably tired of showing the All Blacks scoring 15 tries against Fiji in Albany, showed re-runs of the Lions’ 2001 series defeat in Australia. This, too, had been a difficult tour for players, management, journalists and photographers, but four years later it was equally clear than no-one had taken any notice. In fact, the only person who used the lessons from Australia 2001 was the touring team coach at the time, Graham Henry, who led the All Blacks to a 3-0 series win against the Lions four years later.

The Lions of 2005 began with a pathetic attempt at de-mythology by the terrible twins – Woodward and Campbell – deciding that press releases and individual statements should not contain the name the ‘All Blacks. Instead, we were to refer to the opposition as ‘New Zealand’. This, as one of the All Black coaches was to point out later, was as good as a team talk. It was worth at least eight points.

Players’ newspapers columns were censored to a ludicrous degree, an invasion of human rights and ethics. My favourites: ‘Going for a beer’ became ‘going for a stroll’. ‘Yesterday’s setback’ became ‘yesterday’s result’. One journalist, who managed to get some off-the-cuff quotes from a disenchanted Gavin Henson, after his omission from the First Test squad, was ordered to share them with the rest of the press gang. This was not done in the interests of fair play, simply to save face for the Lions PR department. They had already said that Henson would not be offering comment on his exclusion.

It became very difficult to support a management who behaved with such petty-mindedness.

Then there was Henson himself, the undoubted star of the Welsh Grand Slam in the 2005 Six Nations. He  arrived in New Zealand over-imbued with self-esteem – ‘the history of the British and Irish Lions began when Gav was selected for this trip’ as one Welsh journalist put it – and Woodward somehow managed to completely destroy that character trait. Woodward consistently praised the centre as ‘a complete role model’ yet his handling of Henson was so poor that the Lions management had to fake a picture of the two together.

On the face of it, the Lions did not stand a chance. The All Blacks have a winning record against every team they’ve played. The Lions had won six matches in 34 encounters and there was nothing about the 2005 squad that said that that statistic would change.

As the New Zealand founder of the book chain Sportspages, the late John Gaustad, put it: ‘Sir Clive could be taped as a bit of a twerp before long, and let’s hope he’s not unnerved by this. In New Zealand, it really isn’t about spin, even if you’ve brought along the king of spin as part of your team. It’s about what you do when you get on to the paddock – respect must be earned.’

EPILOGUE: As had been hinted at in New Zealand in 2005 JEFF CONNOR duly suffered his full-blown stroke three years later, spent six weeks in hospital and had to learn how to speak, read and write all over again. He is currently writing a screenplay for the BBC.

About Jeff Connor 12 Articles
JEFF CONNOR was born in Manchester, went to school at Bury and lives in Lytham. He has worked for a number of national newspapers including the Daily Express, Daily Star, Scottish Sun, Scotland on Sunday and Scottish Mail on Sunday. He is the author of 12 books, including: Wide Eyed and Legless, the classic account of the 1987 Tour de France; The Lost Babes, the moving story of the Munich air disaster; The Philosophy of Risk, a biography of the tragic mountaineer Dougal Haston; Pointless, a season with Britain’s worst football team; Up and Under, an inside account of the 2001 Lions tour to Australia; and Giants of Scottish Rugby, which contains exclusive interviews with 40 of the nation’s greatest players. He recently published his first novel: Looking for Lulu.