DAVID WHYTE, who has died aged 81, was a multi-talented sportsman, a dual internationalist at rugby and athletics, and one of the last to achieve that distinction. As a flying winger on the rugby field he won 13 consecutive caps for Scotland between 1965 and 1967, and in the athletics arena represented both Scotland and Great Britain at long jump, earning four Scottish and five British vests.

In addition to his 13 caps, David represented the Barbarians seven times, won an Oxford ‘Blue’ after playing in the ‘Varsity’ match at Twickenham in 1963 and captained the Scottish Universities XV. While his searing pace was undoubtedly a considerable asset, he was sound in defence and had a good rugby brain.

An extremely gifted all rounder who was also a very good tennis player, he may have achieved even more had it not been for injury problems.

Announced: 2021 Game of the Year nominations – but still time to have your say

Away from the sports field he enjoyed a successful career in education, culminating as Rector of Golspie High School from 1983 for almost 20 years where he was an inspiring and highly regarded figure.

David James Whyte was born in Cupar, the fourth of five children of parents Alexander, a laboratory technician, and Helen. With siblings Helen, Moira, Sandy and Graeme, he was brought up in Cupar where he initially attended Castlehill primary before going on to Bell Baxter High School after winning a bursary. Despite suffering the devastating blow of the early death of his father when he was 13, David progressed well at school both academically and at sport where he shone at rugby and athletics.

In the former he captained the school team as well as  the North and Midlands schools’ side and played a few times for the local Howe of Fife club.

After leaving school and winning another bursary, David attended St Andrews University to study English Language and Literature. In the realms of university sport his career flourished with representative honours for Scottish Universities and North and Midlands at rugby, and in athletics he began collecting national titles and international vests.

On the rugby pitch his excellent form led to his Barbarians debut in their 1962 traditional Easter tour of South Wales, playing against Penarth, Swansea and Newport, noteworthy as he had not yet been capped by Scotland.

After graduating M.A.[Hons] he went to Oxford University to study for a Diploma in Education at St.Edmund Hall. While there he played in the ‘Varsity match at centre three-quarter to earn a Blue, his “elusive running” attracting favourable comment. Fellow Scots teammates were Stewart Wilson, Ronnie Lamb and hooker A.D.G. Whyte, a Robert Gordon’s College F.P. Although by then David had appeared in Scottish trials and had made a further appearance for the Baa Baas, against Leicester, he remained uncapped.

It was not until February 1965 that he won his first Scotland cap against Wales, by which point he was playing for Edinburgh Wanderers, and he went on to collect another 12 caps consecutively. In a report of his debut it said: “Whyte had no orthodox opportunity to use his pace in attack but employed it to excellent purpose in defence and pursuit of the loose ball”.

His final cap came in 1967 against England at Twickenham, where he scored a disallowed try, bringing to an end a run that included wins over South Africa and Australia, and tries scored against France and England. He had also made a further three Baa Baas’ appearances against East Midlands, Leicester and Cardiff, before a combination of leg injury problems at the same time as building a career effectively drew a line under his playing days.

In athletics he made his mark while still a youngster. After winning Scottish Schools and Junior long jump titles, he won the A.A.A.’s [British] Junior title with a record performance aged 18, leading to his first British senior international vest that year against France in Paris.

A year later he brought off a great coup by winning the senior A.A.A.’s title at London’s White City which led to a further four British vests against Germany, Poland, U.R.S.S. and Finland, and four Scottish ones. Scottish titles followed before an injury induced gap after which he returned to athletics in 1965 winning the Scottish long and triple jump titles, in both events on his last leap, testament to his competitive steel which was very much part of his DNA.

It is fanciful nowadays to contemplate winning international caps at rugby and national athletics titles in the same year but one which Whyte to his considerable credit achieved.

In 1963, in Dairsie, Fife, David married trainee teacher Judith McKechnie who he had known since schooldays in Bell Baxter High School and with whom he shared a long happy marriage during which they had four sons Stephen, Geoffrey, Barnaby and Sebastian, the latter two themselves achieving age-grade success in rugby and athletics.

His first teaching appointment was at Strathallan School followed by posts at Kirkcaldy and Brechin High Schools. Next he was deputy headmaster at Peterhead Academy where he helped found the local rugby club before becoming headmaster at Golspie until ill health led to his retrial in 2002 after a highly appreciated spell at the helm during which he started rugby for boys and girls. He was an encouraging advocate for education and its life improvement potential, particularly given his own family background which was not, through circumstances, particularly prosperous. 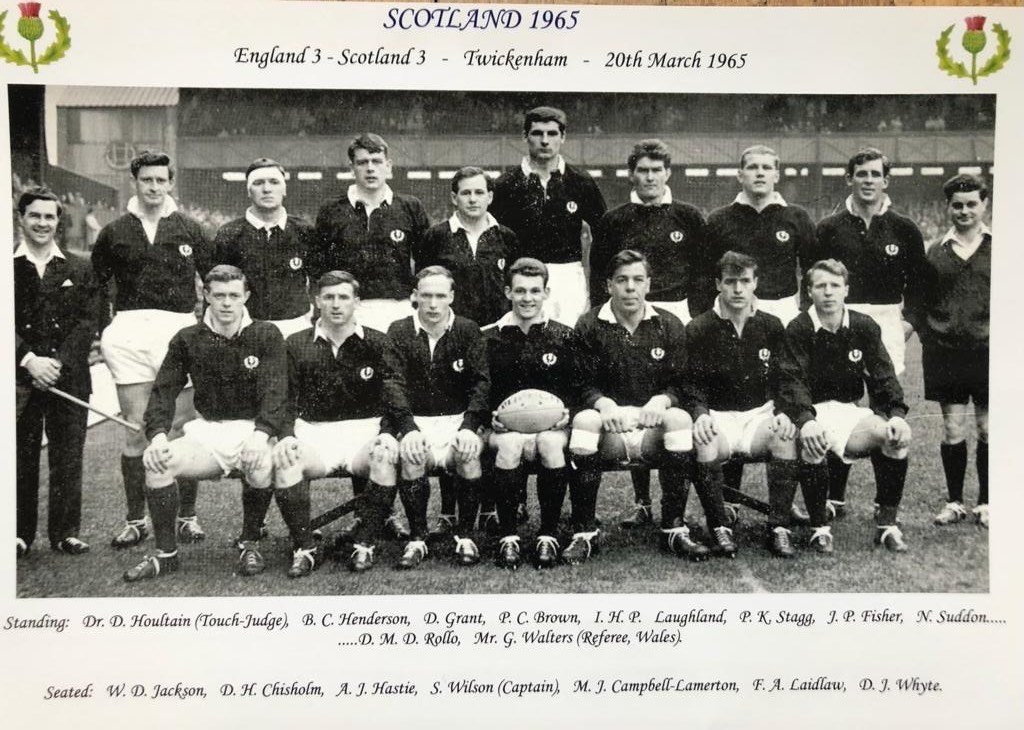 During his time in Golspie where he and Judith continued living after his retiral until 2019, David played a full part in the life of the community. He was a founder member of East Sutherland Rotary Club and was awarded a Paul Harris Fellowship for his service. Very involved in the church, he acted as an elder for 50 years, almost 40 of them at St. Andrew’s Church in Golspie.

Other interests included bridge at which he ranked as a Life Master, taking part in quizzes and studying language and etymology. He and his wife enjoyed travelling, making regular trips to France as well as visiting Bali, Singapore, Hawaii, Australia and Canada among other destinations.

A well rounded, personable individual who loved his family, he was always interested in people and had the ability to make everyone feel welcome. Although a high achiever in sport and in professional life, he remained a humble and complete gentleman. David is survived by his wife, children and 11 grandchildren.

About Jack Davidson 9 Articles
Jack is a retired lawyer/QC from Edinburgh with a passion for sports history. He has contributed obituaries and historically themed sports articles to various publications, including: The Scotsman, The Herald and Nutmeg Magazine.