Esportif and the world's richest players, Andy Goode hypocrisy, fun in the snow for Lenzie, Nepo Laulala struts his stuff on Japanese TV and a Murrayfield love story ...

There are lies, damned lies and statistics as Mark Twain is credited with saying. And the only guarantee is that using numbers is sure to cause a debate. So, with that in mind, the company, Rugby Vision, produced a ranking of world clubs for 2017 that showed Hurricanes at number 1, Glasgow Warriors at number 6 and Edinburgh, surprisingly, at number 11, just ahead of La Rochelle and Scarlets. The list has sparked some heated discussion on social media. The method of calculating the standings – based on winning margins after accounting for the strength of the opposition – makes for interesting reading but proves the point that Twain was making. 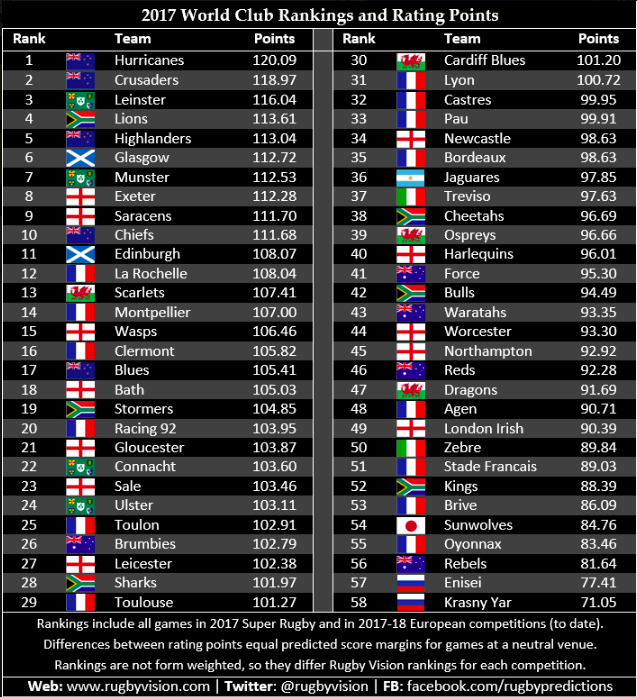 The lure of French rugby explained

The rugby agent Esportif has a full book of high profile clients across the world. The company recently drew up a notional European superteam based on salary levels in the three main competitions. From the evidence, it is clear to see why players are keen to head for France, with only one position – full back – being occupied by a player from the Guinness PRO14 and the Aviva Premiership accounting for three spots.

Their comparison of positions commanding the highest pay this season across the three main professional leagues in Europe is also enlightening. 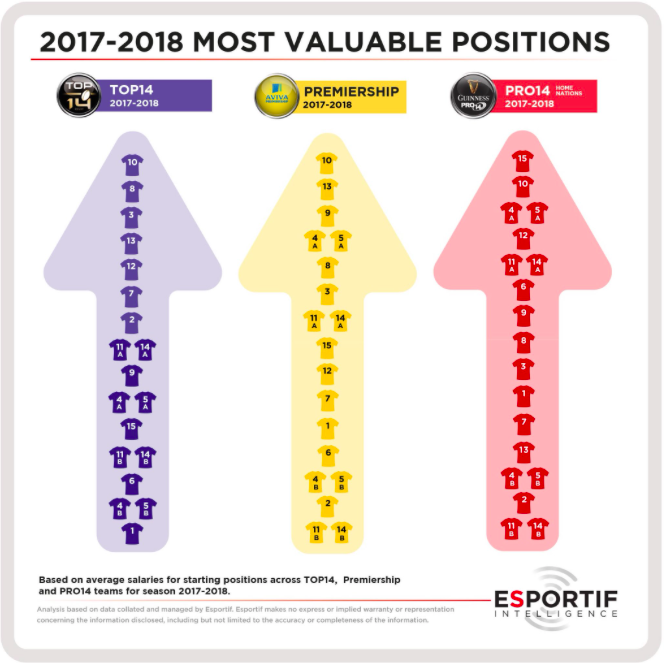 Australian rugby may have had mixed fortunes lately but there is one area where it is now leading the rugby world. The governing body down under has announced pay deals for male and female players that ensures pay equality for those involved in sevens, with women also benefiting from a pregnancy policy that protects their contracts. The women’s XV – the Wallaroos – is still amateur but those selected will now receive appearance money.

As clubs at lower levels of the domestic game know to their cost, it can be tough fulfilling fixtures, for a variety of reasons, most notably player shortages. Several clubs across Scotland have had this issue and have suffered points deductions as a result. However, Welsh Division Three West Central C side Cefneithin have had it tougher than most. At the end of January the club, whose former players include Wales legends Barry John and Carwyn James, had played only six matches – nine fewer than others in the same division. The reasons for postponements have been beyond the control of Cefneithin and have included weather, rivals suffering from lack of players and even a collapsed mineshaft at an opposing team’s pitch.

Not so Goode from Andy

Andy Goode was vociferous in his criticism of Mathieu Basteraud’s homophobic comments towards a Treviso player, laying into the Frenchman on Twitter. However, as the Twitterati reminded the former England international, he doesn’t have an unblemished record on that front himself. 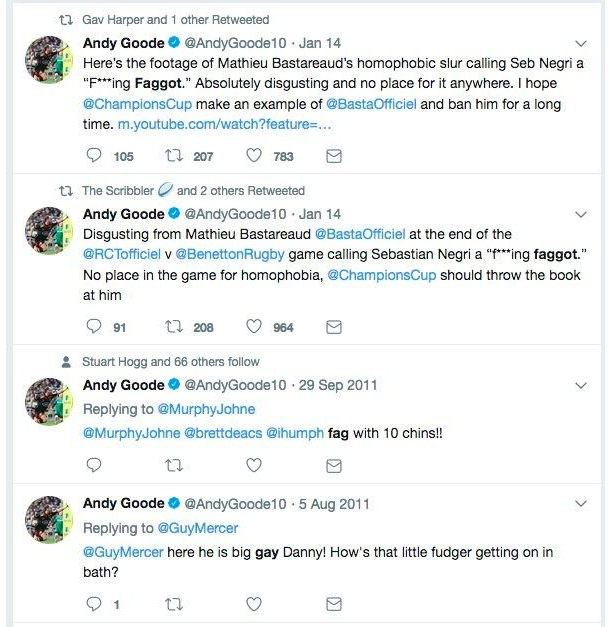 Jean and Evelyn Bernardi will travel from Bergerac to attend the NatWest 6 Nations clash between Scotland and France next month. They will be guests of Scottish Rugby after their granddaughter wrote to Murrayfield bosses. The 11-year-old explained that her grandparents met at the same match 50 years ago. Jean travelled to Edinburgh from France while she was an art student in the city and the couple met at the game – Evelyn’s only visit to the national stadium – and were married the following year. The story may have a happy ending for both, but Evelyn [nee Swankie] will be hoping for a different outcome on the pitch this time, France having won the 1968 encounter.

Snow joke at training in Lenzie

Training may have been disrupted by snow, but Lenzie School of Rugby found a way to employ the elements for tackle practice.

Lenzie School of Rugby shares some ideas for how to get tackle practice done in the snow.@lenzieacad @LenzieRFC pic.twitter.com/fz0se8UaUh

Nepo Laulala has displayed his prowess as a prop on 13 occasions for the All Blacks. But, as this video shows, the 26 year old displayed his scrummaging power in a completely different environment when he faced up to world shot putt champion Tom Walsh in the final of the Japanese television programme Power Wall, alongside American sprinter Justin Gatlin and Russian gymnast Denis Ablyazin.

About Colin Renton 212 Articles
Colin has been a freelance writer on various subjects for more than 20 years. He covers rugby at all levels but is particularly passionate about the game at grass roots. As a fluent French speaker, he has a keen interest in rugby in France and for many years has reported on the careers of Scots who have moved across the Channel. He appreciates high quality, engaging writing that is thought provoking, and hopes that some of his work fits that bill!

That was the month that was: February 2022