Spanish actor Javier Bardem had a busy May, with the launch of the film Pirates of the Caribbean: Dead Men Tell No Tales, in which he plays the part of Captain Salazar. During an interview to promote the film, Barden recalled a rugby career that saw him represent Spain at age group levels up to Under-20, initially as a flanker and then as a prop. Bardem’s many previous roles include the baddie Raoul Silva in Skyfall, where his adversary is James Bond, played by Daniel Craig who turned out for Hoylake RFC in his younger days. 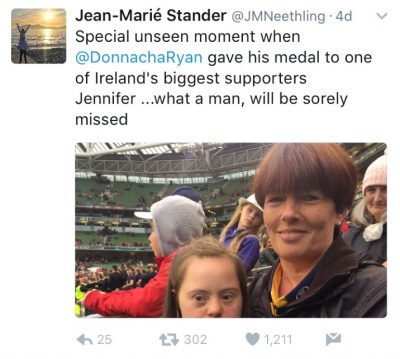 Donnacha Ryan ended his Munster career on a disappointing note when he and his colleagues lost to Scarlets in the final of the Guinness PRO12. But Ryan, who is heading for France where he will play for Racing 92, still managed to spread some happiness among the disconsolate Munster supports when he gave his medal to Jenifer Malone, who has Down’s Syndrome and is a massive fan of rugby.

Ryan’s new club will play at the U Arena, which is under construction in the west of Paris. And, as is often the case, officials plan to mark its opening in October with an event. In this case, it will be a concert. And the artists will be a group that is tipped for a bright future  – the Rolling Stones.

Don’t stop until you drop

It can be tough to land a conversion after a lung-bursting length of the field run in a sevens match. But just to make life a little bit trickier for some legends of the game, HSBC, sponsors of the World Series, threw down the gauntlet with the dizzy drop goal challenge. The results were perhaps predictable, but hilarious nonetheless.

Age no barrier in Bantry Bay 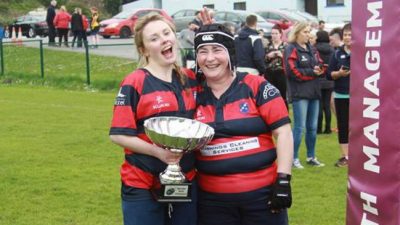 It’s not uncommon for players to continue their rugby careers later in life these days. But it’s not so frequent that someone takes up the sport at the age of 50 and starts winning medals with a club, as is the case with Eileen McCarthy. The 53-year-old turned out for Bantry Bay in Ireland and helped the club win the Munster Women’s Plate competition. And, adding to the sweetness of her success was the fact that she lined up alongside her 24-year-old daughter Aileen.

Fireman Jon to the rescue

Jonathan Laskowski, coach of French lower league side Saint-Andre-de-Cubzac, had a more eventful afternoon than he expected when he led his men out for an away match against Ychoux. With his team leading 11-10, Laskowski’s attention was drawn by shouts from the stand. The volunteer fireman climbed into the crowd where an opposition spectator had suffered a heart attack. And the coach delivered heart massage then, with the help of the club’s bus driver and a player, used a defibrillator. Emergency services arrived 20 minutes later to take control. Ychoux went on to win the game 15-11.

Shepherd almost in the doghouse with English selectors

Plymouth Albion scrum half Matt Shepherd had a fraught end of season after being selected to tour Spain with the England Counties squad. Instead of celebrating his call up, the 27-year-old had to drive to Wales to apply in person for a new passport after his dog tore his current one to shreds. Fortunately the replacement document arrived in time for him to make the trip. However, the story did not have a completely happy outcome for Shepherd, who was in the Cornwall squad that lost to Lancashire in the County Championship final at Twickenham, three days before England Counties launched the tour with a match against Euskarians in San Sebastian.

About Colin Renton 210 Articles
Colin has been a freelance writer on various subjects for more than 20 years. He covers rugby at all levels but is particularly passionate about the game at grass roots. As a fluent French speaker, he has a keen interest in rugby in France and for many years has reported on the careers of Scots who have moved across the Channel. He appreciates high quality, engaging writing that is thought provoking, and hopes that some of his work fits that bill!

HERIOT’S are out to end a frustrating FOSROC Super6 Sprint Series on a high tomorrow (Saturday) afternoon when they take on Boroughmuir Bears. Although the fourth-sixth placed play-off match is at Meggetland, it is officially …

HERIOT’s this morning announced that head coach Andrew Kelly is leaving the club “by mutual consent”. The former Edinburgh hooker had been in charge of the Super6 side since his appointment in late 2019.      …

Leagues must be pruned if sevens rugby is to flourish