Demand for instant player reaction is perhaps understandable in the 24 hour news environment in which we now live. But as Henry Speight’s on-field chat with a television journalist after dotting down for Brumbies against Western Force shows, there is still a need to choose the moment carefully.

The low key performances of Italy in the RBS Six Nations brought calls for a system of promotion and relegation or a play-off among Europe’s second tier nations. It’s not quite Article 50 in reverse, but Rugby Europe has formalised its efforts to secure a place at the top table.

Brazil underlined their emergence as a rugby force with a historic victory over Canada in the Americas Rugby Championship. The country’s progress in the oval ball game has taken Brazil to the brink of breaking into World Rugby’s top 30 and presented rugby commentators with an opportunity to emulate the efforts of their football counterparts, as the reaction to the winning try against the Canadians shows.

As poet laureate, she is undoubtedly skilled linguistically. But will Carol Ann Duffy be able to use her talents as a wordsmith to get the best out of the Connacht players as they bid to challenge for the GuinnessPRO12 title next season?

Jones jogs off with Japan plan

Eddie Jones is not everyone’s cup of tea and the England coach acquired another detractor in the form of Jamie Joseph, his successor as Japan coach. According to Joseph, Jones has hidden the notes relating to his time at the helm, a period that included Japan’s impressive performances at the 2015 World Cup topped by a stunning victory over South Africa. “There’s no training programme, no intellectual property,” Joseph told journalists last month. “It existed I’m sure, but it existed with Eddie and it’s all gone with the bloke, so you’ve got to start again.” 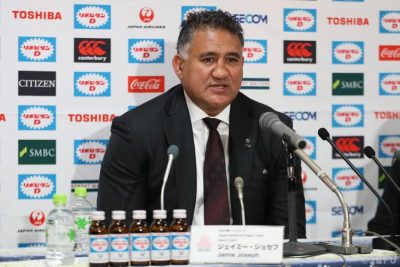 Who will win the fitness challenge?

Grand National winning jockey Leighton Aspell and Bristol winger Tom Varndell go head-to-head in part one of a challenge arranged by Liverpool John Moores University to establish which of the two is fitter.

About Colin Renton 234 Articles
Colin has been a freelance writer on various subjects for more than 20 years. He covers rugby at all levels but is particularly passionate about the game at grass roots. As a fluent French speaker, he has a keen interest in rugby in France and for many years has reported on the careers of Scots who have moved across the Channel. He appreciates high quality, engaging writing that is thought provoking, and hopes that some of his work fits that bill!

‘For want of a kicking tee, a game was lost’: Orkney push West of Scotland all the way