SELKIRK lit up the Borders Sevens circuit by winning their own tournament at Philphaugh yesterday, with victory over last year’s winners, Melrose, in a tense final.

The result will not suddenly throw Selkirk into contention for the Kings of the 7s title but it gave the Philiphaugh club the success that difficult  circumstances have not made possible this season.

Summer tour: Adam Hastings has chance to claim the keys to No 10

Cameron Redpath called up by Eddie Jones for senior England

“It’s been a long season with bad weather, postponed matches and with fifteens games being played in the middle of the sevens circuit, it’s been difficult,” explained coach Michael Jaffray. “We’ve not really been able to put out a strong squad but today we had our strongest possible team.

“The boys performed really well and they just got better and better through the rounds. It was a tough final but we’re really pleased at what we achieved. It’s what the sevens circuit needed. A different team winning is great for the competition.

“This will lift us going into the off-season. It’s a real boost and great for the town today. I thought the final was high quality –  a great advert for the game.”

The implication of the Selkirk result means that the Kings of the 7s title will not be decided until next Saturday in the final round at Jed-Forest. Watsonians could have wrapped up the title yesterday but their defeat by Melrose in the semi-final denied the Myreside men an early coronation.

Watsonians, however, will go into the Jed Sevens well clear of challengers, Melrose, and need only get through the first round to secure the title. 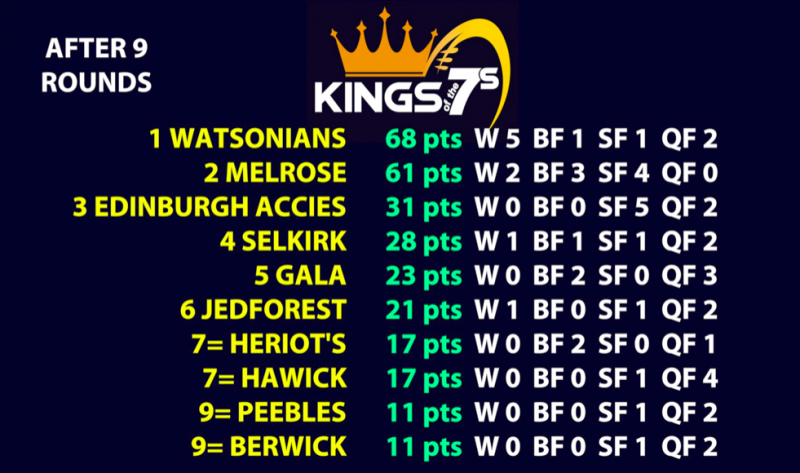 Selkirk looked likely winners from the start after impressive wins over Peebles and Kelso and secured their place in the final with a 39-19 victory against Edinburgh Accies, with tries by Darren Clapperton, Clinton Wagman Aaron McColm, Craig McDougall, Josh Welsh and Steve Hamilton (2). Accies scores coming from Callum Ramm (2) and Stuart Kirby.

For their part, Melrose cruised through the lower part of the draw sweeping past Hamilton and then delivering a similar blow to the Powerbombs. Then, in the last four, they faced Watsonians, who had defeated defeated Jed-Forest in extra time before beating GHA.

Watsonians led 10-5 at the break through two tries by the impressive Charlie McKill to a Melrose touchdown by Ross McCann. But tries in the second half by Struan Hutchison and Jason Baggott gave Melrose a 15-10 win.

Then in the final converted tries by Darren Clapperton for Selkirk and Craig Jackson for Melrose left the teams tied at 7-7 going into the break, before a winning second half score by Selkirk’s wing Wagman sent the Philiphaugh fans into euphoria.

Elsewhere Boroughmuir appeared to have defeated Hawick in the first round only for the result to be reversed after it was spotted that they had used ‘rolling’ subs in contravention of rule 4.  Hawick, fielding several under-18 players used their reprieve to challenge Edinburgh Accies but lost 15-19.

Error, group does not exist! Check your syntax! (ID: 3)

Summer tour: Adam Hastings has chance to claim the keys to No 10

About Alan Lorimer 269 Articles
Scotland rugby correspondent for The Times for six years and subsequently contributed to Sunday Times, Daily and Sunday Telegraph, Scotsman, Herald, Scotland on Sunday, Sunday Herald and Reuters. Worked in Radio for BBC. Alan is Scottish rugby journalism's leading voice when it comes to youth and schools rugby.