THE highest paid executive in the Scottish Rugby Union – usually the Chief Executive – received aggregate emoluments of £933k (before pension contributions) for the year up to the 31st May 2019, more than double the £455k earned the previous year.

The fees and salaries for all the company directors has jumped from £1.13m to £2.246m. These figures include the crystallisation and release of bonuses accrued during the past three years as part of the organisation’s ‘Long Term Incentive Plan’.

The accounts, which were initially prepared in time for the SRU AGM back in August and reported a £61m turnover, were finally registered at Companies House yesterday and went online today CLICK HERE.

Chief Executive Mark Dodson signed a three-year contract extension in March 2018 (despite having two years of his current contract still to run) meaning he is signed up until after the 2023 Rugby World Cup in France.  This deal was struck during the period between the end of the Keith Russell unfair dismissal tribunal and the delivery of a damning verdict in that case.

The SRU Remuneration Committee when Dodson was awarded this new contract was chaired by former Scotland prop Ian McLauchlan, with Mike Monro, Lesley Thomson, David McMillan and Rob Flockhart (part year) all serving on the committee during the 2017-18 financial year. The Committee is responsible for making recommendations, within agreed terms of reference, on remuneration policies, monitoring and approving executive directors’ and certain senior executive remuneration packages, setting and monitoring key performance targets and reviewing succession planning. 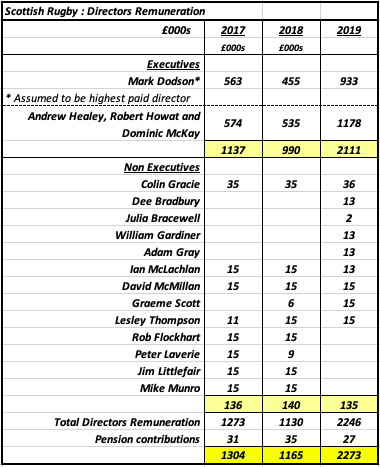 During 2018-19, McLauchlan (Chair until 1 April 2019), Adam Gray, William Gardner, Thomson and McMillan served on the Committee.

About David Barnes 3114 Articles
David has worked as a freelance rugby journalist since 2004 covering every level of the game in Scotland for publications including he Herald/Sunday Herald, The Sunday Times, The Telegraph, The Scotsman/Scotland on Sunday/Evening News, The Daily Record, The Daily Mail/Mail on Sunday and The Sun.

Mike Blair’s side fail to take advantage of Matteo Minozzi being red-carded after 10 minutes, as well as Italian’s picking up two yellow-cards during second half …