IT must have been a pretty big shock to the system all round when Jonny Hope, the archetypal club man, did not turn up for training at Bridgehaugh on Tuesday night. In fairness, the Stirling County skipper had a good excuse for his absence given that his wife Lauren had given birth to their first child earlier that afternoon.

Both mother and baby – a healthy boy called Finlay – are doing well, so the irrepressible Hope is planning to make it along for the latter stages of training tonight [Thursday], and is already looking forward to playing a full part in his beloved team’s next match at home to Marr this coming Saturday.

“Lauren is still in hospital so I managed to get some sleep last night, which might become a bit of a rarity in the months ahead, so I made the most of it,” he chuckles. “And I’ll be playing this weekend – I always said that if I can play then I will because I don’t want to miss anything. We’re in a good place at the moment and I just want to keep being part of it.” 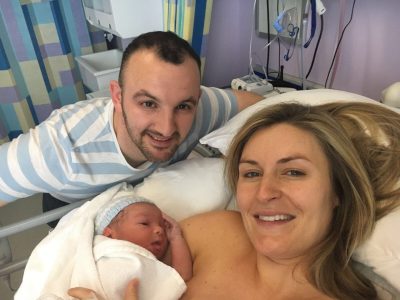 It might be only the second most exciting thing that has happened to him in the last four days, but Hope was named in The Offside Line’s BT Premiership team-of-the-week on Monday afternoon after a typically assured and astute performance at stand-off in County’s 13-22 victory away to Glasgow Hawks last Saturday. That result lifted the Bridgehaugh men to fourth in the table and kept them within striking distance of both Ayr and Currie Chieftains, who are currently grappling for second spot.

Stirling’s record of four wins and four losses from eight games so far is hardly the stuff of legend, but they have shown in flashes that they can be one of the leading play-off contenders this year.

“I think we are ten times better off than where we were this time last year,” concurs Hope, whose day job is driving giant 360 degree tracked excavator machines on construction sites.

“We had a brilliant pre-season, we changed things up a wee bit and the boys put in a hell of a lot of work, so we’re fitter and stronger and faster than we have ever been.”

“In every game we’ve played this season we have won the second half (except against Boroughmuir, when a 14 point half-time lead was reduced to 12 points). So, it shows that we can do – we have this next gear we can move into.”

“The stats in attack tell the story [County have picked up six bonus points for scoring four tries, which is more than any other team in the league apart from runaway leaders Melrose]. But we have also been leaking quite a lot of tries so we need to work a bit more on our defence. I don’t think it is a problem with the system, just individual lapses in concentration and technique.

“We don’t want to set ourselves any huge targets but the play-offs should definitely be on our radar given the squad that we’ve got and the club that we are. But it is not easy – from all the seasons I have been playing senior rugby, this is the hardest one yet. Rugby is on a totally different level from ten years ago – it is a lot faster and far more physical.”

Perhaps the biggest indicator of County’s true potential is that they are the team which has come closest so far this season to upsetting the Melrose bandwagon, but ultimately gave themselves too big a mountain to climb by coughing up 19 unanswered points in the first 14 minutes, and eventually lost 27-40.

“They are deservedly the league leaders because they are a very well oiled machine, but we were down four or five starting players, so while we are disappointed not to have got more out of the game, we took a lot of confidence from that experience. If we can click for 80 minutes I think we’ll give any team in this league a tough afternoon,” concludes Hope.

A few eye-brows were raised when the club announced that instead of appointing a direct replacement to out-going head coach David Adamson at the end of last season, they were going to employ a seven strong coaching panel instead. It has since become apparent that Peter Jericevich leads this group as player-coach, with defence coach Graeme Young the main man on the side-lines during matches.

“PJ [Jericevich] is very organised, very driven and he has brought fresh ideas. Everyone has got their job and they all know what they need to do,” explains Hope. “He leads the analysis and pulls together the blueprint for training sessions, then Graeme, Eddie Pollock andChris Fusaro, when he’s available, come in and do their wee parts. We train with the 2nd XV as well so there’s other coaches taking care of that, and it works really well.”

Hope adds that there have not yet been any clashes between captain and player-coach during the heat of battle.

“Once we step over that white line we are all players and if something needs said then I will say it. But we have a really good relationship and respect for each other so it tends to be that we are on the same page,” he says.

Niko Matawalu, who made a big impression when turning out against Hawks last week, has been named in the Glasgow Warriors team to play the Southern Kings tomorrow night, so will not be back in County colours this weekend – but the Fijian winger’s first experience of the club is worth relating.

“It was very funny because Niko came down to training on Thursday and when he turned up we were all standing there chatting to him,” recounts Hope. “Lorne Boswell – one of our directors – went and got him some kit. He got shorts, socks and a training top, and he was like a 13-year-old who had just been given a brand new bike. He took all his Glasgow kit off and put all his Stirling kit on, and he was just walking around with a massive smile on his face. That gave us a buzz and I hope it gave him one, too.”

“We always try to make everyone welcome. We make sure that anyone who comes to the club knows that they are part of the family and we’ve got some really good people driving that. It’s simple really: if you feel like you don’t belong, then you are not enjoying yourself and you don’t play to your full potential. It’s not rocket-science.”

“After every game we always have a huddle and if we have someone new making their debut for the 1st XV then John Wright makes a wee speech to say thank-you and presents him with a tie. It is not a massive thing, but it goes a long way. It doesn’t cost anything to make someone feel appreciated.”

It has been a few years since Hope was handed his first Stirling County tie. At age 29, he has a few years left in the tank yet, but having come right through the club from the mini-section, he really is part of the furniture at Bridgehaugh.

“My Dad, John, played for County when they were down in the lowest leagues, and won five or six promotions as they climbed up the leagues, before he retired. He was later president – so he’s been there through thick and thin.  And my brother Jason, who is five years older than me, also came through the club from the mini sections as well, but unfortunately he had this habit of breaking bones, so he retired when he was about 25.”

“But I’m still going. It get’s harder and harder each Sunday morning, but I enjoy it and wouldn’t change it for the world.”

“I always say to the coaches when they approach me that I’ll play anywhere as long as the team is winning. I think my best position is at stand-off: I like to get my hands on the ball and organise, and also let these young bucks outside me spread their wings. But I obviously play a fair bit at full-back, and I had half a season on the wing not so long ago because we didn’t have anyone else. So it is just a case of getting out there and making the most of it. I’ll play in the back-row if they need me there.”

Hope doesn’t flinch when it is suggested that he should be careful about who he says this to or he might end up pressed into action at tight-head prop.

“There might be a day,” he answers, with only a slight hint of mischief. “It’s been drummed into me from a young age – through the club and through my family – that if you are in the team then that’s brilliant, and if you’re not in the team then you work hard to get in next week.”

Old school values from a real rugby club stalwart. A pretty good role-model for young Finlay to look up to.

About David Barnes 3179 Articles
David has worked as a freelance rugby journalist since 2004 covering every level of the game in Scotland for publications including he Herald/Sunday Herald, The Sunday Times, The Telegraph, The Scotsman/Scotland on Sunday/Evening News, The Daily Record, The Daily Mail/Mail on Sunday and The Sun.