HADDINGTON RFC are looking for volunteers to help them break the world record for the most players to take part in a continuous touch rugby match at Neilson Park this Sunday.

The current record is 442 players in a single match, and Haddington are aiming for 700 – to mark the town’s celebration of 700 years of having a Royal Charter.

Everyone and anyone aged five and over is welcome to take part, regardless of experience or ability. Entry is free, and there will be food and drink available for all the hungry and thirsty participants (and supporters) after they have strutted their stuff.

The event is being run as part of the club’s Royal Bank RugbyForce Day and is raising money for the Wooden Spoon charity.

Participants must pre-register to meet Guinness World Record rules. This can be individually or in groups of up to seven (so seven from a team/club/family/group of friends can play together). Please click here to register.

Then, simply turn up on the day and enjoy a 10-minute run-around for a great cause.

It is being supported by current Scotland internationalists Stuart McInally and WP Nel, and former Scotland and Lions captain Finlay Calder.

McInally, who was won 17 caps for Scotland and appeared in every game during last season’s Six Nations championship, will be playing during the world record attempt, giving players of all ages and abilities the chance to say they have played with an internationalist!

Nel, who has played 22 times for Scotland, including the Calcutta Cup victory earlier this year, is unfortunately unable to play during the game as he recovers from injury, but he will be helping kids to improve their skills on the day.

Calder, who was born in Haddington, won 34 international caps between 1986 and 1991. He had a formidable reputation as rampaging, uncompromising breakaway forward. He led the Lions to an historic series victory in Australia in 1989 and was voted in 2017 as one of the top 50 players to have worn the famous red jersey. In his final game in 1991, he led Scotland to their best ever finish at a World Cup. 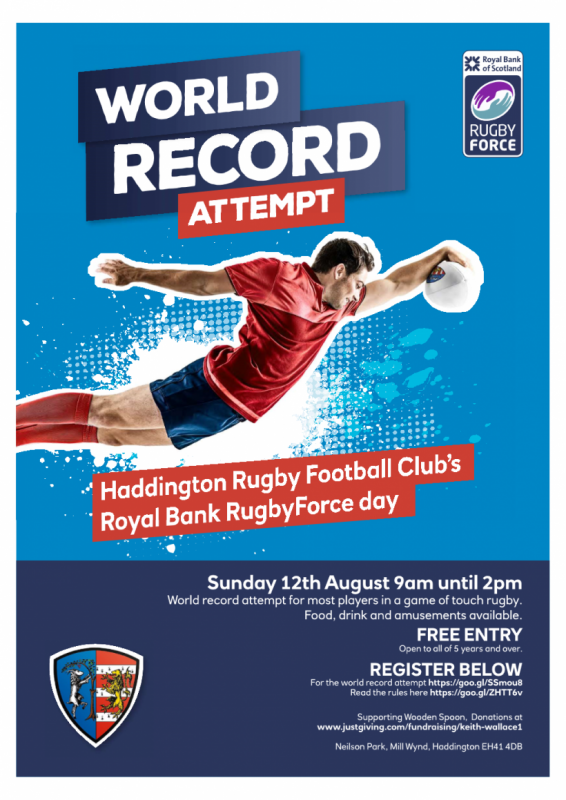 THE OFFSIDE LINE’S coverage of grassroots, youth and schools rugby is supported by MACRON STORE EDINBURGH (COLIN CAMPBELL SPORTS). Click HERE to contact the team for information on how they can help with your club or school’s kit supply demands.
About David Barnes 3038 Articles
David has worked as a freelance rugby journalist since 2004 covering every level of the game in Scotland for publications including he Herald/Sunday Herald, The Sunday Times, The Telegraph, The Scotsman/Scotland on Sunday/Evening News, The Daily Record, The Daily Mail/Mail on Sunday and The Sun.

A late long-range penalty from the hosts drops just short …

Premiership: Edinburgh Accies win but make life hard for themselves versus Jed-Forest

Marr host top of the table Currie Chieftains in a replay of last season’s Grand Final, while Hawick take the Bill McLaren Shield on the road to GHA …