YOU don’t have to be a specialist in Scottish rugby to know that Gala RFC is one of a handful of Borders clubs steeped in the history of the game. Established in 1875, Gala is part of the folklore of the sport, a club which has produced a string of international players over nearly a century and half, the most recent of which is Scotland’s most capped back, Chris Paterson.

The list is extensive and includes, British Lions such as Peter Dods, Derek White and the current Scotland head coach Gregor Townsend. The richness of Gala’s hall of fame is matched by the excellence of the Netherdale pitch, which has undersoil heating, installed when the ground was chosen as the home of the Borders Reivers professional team.

But if Gala can boast a distinguished past in which the club has excelled in both fifteens and sevens rugby, the glorious history has not translated to present times. Currently Gala sit in the lower half of National One, their aim to remain in this tier by the end of the season. Yet only a few years back Gala were one of the forces in Scottish club rugby and at one stage occupied second position in what was a full-blooded Premiership.

National One round-up: Kelso climb out of relegation zone

Then the rot set in.  A falling-out with head coach George Graham and the defection of a number of key players to other clubs, most notably a quartet lured to Watsonians, resulted in a rapid decline for the Netherdale outfit. Moreover, Gala, who in common with other clubs, paid their players and notably several from overseas, hit the financial buffers, forcing a change of policy.

This season’s Gala president, Ian Dalgleish, became part of a club management confronted with a dire cash shortfall. He explains: “I came back to Gala five years ago and arrived at a time when the club had decided not to pay players. It was just unsustainable. Potentially, we could have gone under.”

Gala in the current era is a different club but crucially it is a club that has addressed what could have been a free-fall into oblivion. Indeed, such is Gala’s new-found ambition that missing out on a place in this season’s Premiership was initially seen as a disappointment.

“We were disappointed at the time that we missed out on the Premiership. It came down to points difference. But on reflection we’re better where we are for the moment. It suits us because nearly all the players are in their early twenties,” says Dalgleish.

Gala’s route back to a more prominent position in Scottish rugby is dependent on a successful rebuilding programme, with an increase in numbers a key element, and one that is already being achieved this season.

“Last year we managed to put together a second team sporadically but this season, apart from a problem in the first month, we’ve been getting a second XV out regularly. And the other good thing is that the Wanderers [under-18 side] are at full strength. They’re playing well.  In the school, there’s quite a few of the under-16s playing for the Borders and East Lothian select side,” states Dalgleish.

As is now the template for rugby development at youth level, Gala employs two of their players, winger Ross Cooke and full-back Ruairi Howarth, to coach the game in Galashiels Academy, with the goal of tapping into local talent.

Another issue being looked at closely by the Netherdale management is a rationalisation of the disparate strands of rugby in Galashiels. “There are a lot of individual clubs in Gala so what we’re trying to do is bring them together under the one roof. Wanderers are a separate club, YM are a separate club and the minis are quite separate. What we’re trying to do is bring everyone together.”

On the playing side, the club are fortunate that the inspirational former Samoa international forward Opeta Palepoi chose to stay on in Galashiels as head coach following his playing career with both the Netherdale club and the Border Reivers. ‘OP’, as he is known, appreciates that the club’s rebuilding programme cannot happen overnight.

“It’s coming slowly,” he says. “We’ve got a lot of young guys coming in. That’s the only way we can progress the club. Long term it will get better. We’re trying to play an exciting kind of game that will suit the players we’ve got. We’re trying to develop the young players coming up and use them.”

A challenge for Palepoi is to make the players physically ready for the demands of the modern game. With a wry smile he contends: “They’re all skinny and they’ll have to put on muscle. Good thing is that these youngsters want to learn. We’re working with them in the gym [completely rebuilt with new equipment] and giving them good conditioning and strength. It’s going well but it’s a longer term thing.”

Scroll down to read more … 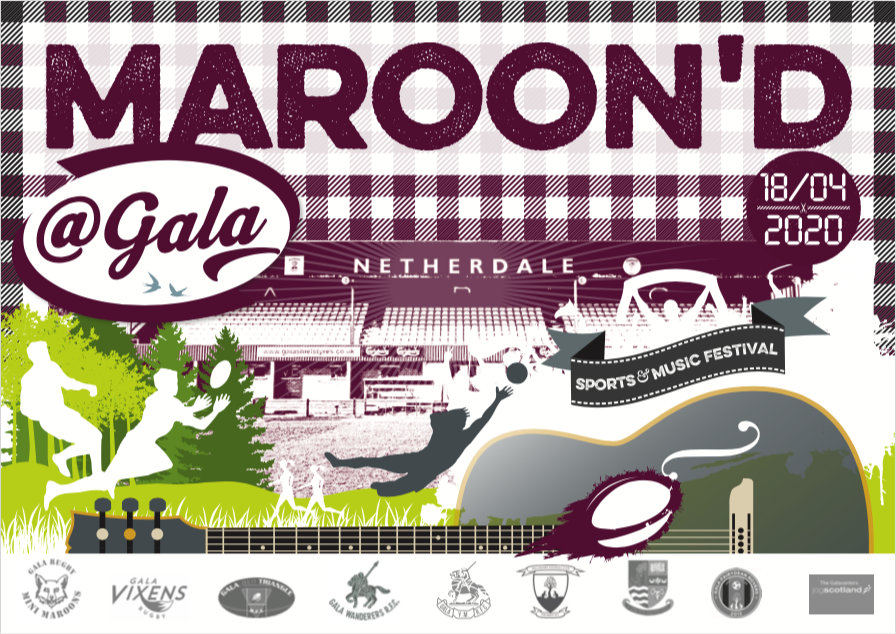 While Gala have concentrated on rebuilding their side with young players, they are still very dependent on the input of a small group of old heads, among whom skipper Euan Dods is a key member.

Dods, a nephew of Scotland and Lions full-back Peter, and who returned to Gala after a spell with Watsonians, believes he can usefully pass on his experience to the next generation of Gala players. “I’m here to help the young boys,” he says. “Although I’ve been around the block a few times I’m still only 29. I’m enjoying being back at Gala.

“We’re in a rebuilding phase right now. We’ve got a lot of young guys we’re trying to bring on. In the team we fielded for our cup match [against Kelso], there was probably seven or eight under the age of 21. We want to build this squad and see how far we can get.

“The majority of the guys are from Gala. We’re doing a lot with the youth section and we’ve had practice sessions against them. We’re really looking to develop the club and just make it as Gala orientated as possible.”

It may take some time to see the fruits of Gala’s development policy but at Netherdale there is a sense of optimism. To amend an oft-quoted mobile network advert from the past: the future is maroon.

Taking place alongside football and running events, and culminating in the final of the famous Gala 7s, it will be an inclusive celebration of sport.

“We’ve worked hard in recent years to keep our 7s relevant and we’re confident that our plans for 2020, bringing together a range of sports under one umbrella, will really re-energise the event,” said Gala RFC President Ian Dalgleish.

“Gala Rugby has a proud sporting history and many of our club players have gone on to earn international caps. What’s exciting about this concept is that the players’ journey – from primary age groups through to seniors – will be brought to life and will hopefully inspire our future stars.”

In addition to the showpiece sporting event, there will be live bands, street food, themed drinks areas and fun zones. Plans are also underway to hold a Sportsman’s Dinner on the Friday night (17 April).

“It’s going to be a great weekend with something for everyone,” added Dalgleish. “Netherdale is the perfect host venue with eight rugby pitches sitting alongside a 3G pitch at Gala Fairydean Rovers and the Heriot-Watt/Borders College campus, which is a real centre of excellence with fantastic facilities. By working together – something we’ve not done to this extent before – we can really maximise what we have to offer.

“We’ve already received a hugely positive response from the local community and we expect that excitement to build as further details are announced in the coming weeks and months.”

THE OFFSIDE LINE’S coverage of grassroots, youth and schools rugby is supported by MACRON STORE EDINBURGH (COLIN CAMPBELL SPORTS). Click HERE to contact the team for information on how they can help with your club or school’s kit supply demands.
About Alan Lorimer 239 Articles
Scotland rugby correspondent for The Times for six years and subsequently contributed to Sunday Times, Daily and Sunday Telegraph, Scotsman, Herald, Scotland on Sunday, Sunday Herald and Reuters. Worked in Radio for BBC. Alan is Scottish rugby journalism's leading voice when it comes to youth and schools rugby.