Lies, damned lies and statistics: Scotland, the third best team in the world

They say that statistics can be manipulated to make them say what you like and a glance at the global standings of the major rugby nations provides the proof behind that argument. As the year draws to a close, Scotland currently sit seventh in the official World Rugby rankings, with New Zealand leading the way and England second. But, judged over 2016 results only, the Scots with two wins in each of the RBS Six Nations, the summer tour and the autumn internationals have an overall success rate of 60%. That makes Vern Cotter’s men the third most consistent team on the planet, with England’s unbeaten run for the year giving them top spot and New Zealand, whose only defeat was against Ireland, in second place. 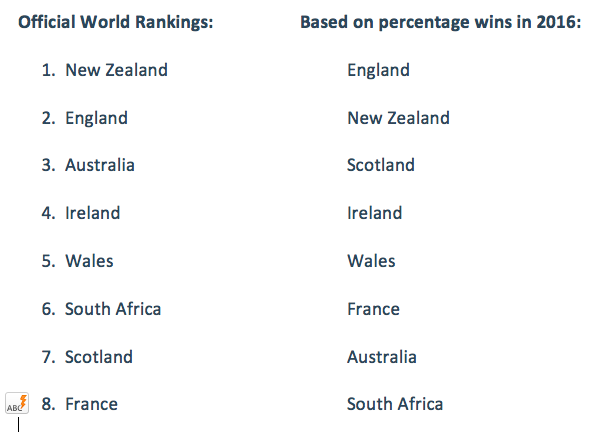 Finn Russell received some kudos for the way he adapted when the ball toppled during his penalty run-up by picking up and slotting a drop-goal – but Harry Leonard (main picture) went one better. The former Edinburgh and Scotland Under-20 stand-off is now plying his trade with Rosslyn Park in National Division One, after a spell at Yorkshire Carnegie. The 24-year-old, a Macphail Scholarship recipient five years ago, caught the eye recently with his calm reaction and dazzling football skills when the ball fell over as he lined up a conversion in a match against Coventry, as tweeted in the attached clip by a club supporter:

A touch of class

Former Australian rugby league player Beau Ryan delivered a touching final moment of joy for a terminally ill fan when he rushed to her bedside shortly before she passed away. The girl, Kia Lettice, was suffering from ovarian cancer and her friend Mahalia Murphy – a women’s sevens international – tweeted a request for Greg Inglis or Beau Ryan to visit the hospital, stating that her friend had only four hours to live. Ryan responded with a tweet saying, “Leaving Shellharbour now! See you in 2 hrs Tell her to stay strong”. And he made the 120 kilometre journey in time to see Kia, who was boosted by the visit but died several days later.

If Ryan is the good guy of the month, then Bruno Doglioli is unquestionably the baddie. The 33 year old Argentinian is facing a three-year ban that could spell the end of his career after he flattened a female referee during an Italian Serie A match between his team Vicenza and Valsugana. Doglioli sent Maria Beatrice Benvenuti sprawling with a push while she was looking in the other direction. The official yellow carded the offender and completed the game before going to hospital where she was found to be suffering from whiplash.

For their next game, against Casale, the player’s team mates at Vicenza, who have won only once this season, wore tee shirts carrying the message, “Sorry Beatrice”.

Love All for All Black brothers

The Savea brothers, Julian and Ardia, will swap their All Black rugby kit for tennis whites on New Year’s Day to face off with another sibling pairing in a charity match before the ASB Classic in Auckland. The proceeds will go to help victims of November’s earthquake in Kaikoura. The duo face a tough test on the court against tough opponents in the shape of the Williams sisters.

The possibility of American clubs joining the Guinness PRO12 first surfaced in August, with the league’s boss Martin Anayi admitting that discussions had taken place with broadcasters, sponsors and USA Rugby. The plan was eventually ditched and now, it seems, that is also the fate of professional rugby on the other side of the Atlantic.  In late December, PRO Rugby chief executive Doug Schoninger wrote to all players advising them that the organisation was exercising the voluntary termination clause in their contracts. He also apologised for the late payment of their December salaries.

Hilton still propping up on the rugby field

Old props never die – they keep on scrumming. Dave Hilton, the Bristol butcher who was capped 42 times for Scotland between 1995 and 2002 before it was discovered that he was ineligible, is still lumbering around the pitch, albeit at a lower level than when he plied his trade with Bath, Glasgow and Bristol. Now aged 46, and recently having left his post as forwards coach at Mosely, Hilton has donned his boots once more. Now turning out for Oxford in the South West Division – Berks/Bucks & Oxon Championship, he contributed to a winning end to 2016 when he played his part in a 62-0 win away to Farnham Royal, played in front of an official attendance of 46.

About Colin Renton 232 Articles
Colin has been a freelance writer on various subjects for more than 20 years. He covers rugby at all levels but is particularly passionate about the game at grass roots. As a fluent French speaker, he has a keen interest in rugby in France and for many years has reported on the careers of Scots who have moved across the Channel. He appreciates high quality, engaging writing that is thought provoking, and hopes that some of his work fits that bill!