DANNY WILSON has distanced himself from a possible move away from Glasgow Warriors to take over as head coach at Harlequins – but did not explicitly rule out the possibility of a switch to The Stoop.

It was reported over the weekend that the English Premiership side have compiled a four-strong list of candidates to replace Paul Gustard, who departed the club abruptly in January, with Wilson named alongside New Zealander Tabai Matson (recently released as assistant coach to the Chiefs Super Rugby franchise), South African John Dobson (currently head coach of the Stormers) and perhaps Scotsman Clark Laidlaw (son of Roy and cousin of Greig, who is currently preparing the New Zealand Sevens team for this summer’s Olympics).

Wilson has come under fire recently from a vocal section of Warriors’ fanbase who believe the club has gone backwards since he took up the reins last summer. The reality is that he was dealt an almost impossible hand, inheriting a squad which has already hit a downward trajectory during Dave Rennie’s last season in charge, and with Covid meaning that he had no budget and minimal time to put his own stamp on the team ahead of the restart of rugby last August.

He has also been deprived a huge number of his most influential players during this campaign due to a combination of a horrendous injury list and two mammoth international windows.

The table below highlights how many leading players missed more than two-thirds of the 1,520 game minutes in total the team has played this season: 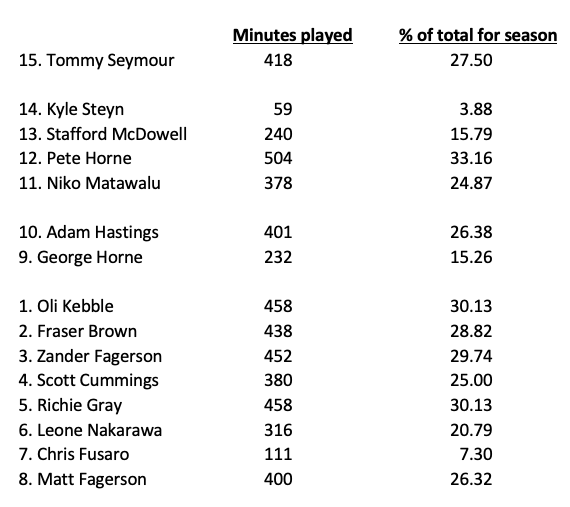 In the circumstances, Warriors did well to finish fourth in their PRO14 conference, and it now looks like that will be enough to qualify them for the enlarged 24-team Champions Cup next season. Wilson has recruited extensively for 2021-22 and will hope that the several youngsters he has blooded this season will push on to become key members of a much deeper squad.

“We managed to win three out of our last four league games to qualify for Europe, and if we can beat Edinburgh on Friday to claim the 1872 Cup for the first time since 2017 then all of a sudden there are small achievements to build on after what we all knew would be a tough year,” said the coach.

There has been mistakes along the way. Signing and then extending the contract of Leone Nakarawa was a waste of time and money, and he persevered for too long with Brandon Thomson after it became apparent that the South African playmaker’s nerves were shot.

Even still, to say that the jury is out on Wilson would be premature because he has not even had a decent chance to properly make his case yet.

THE OFFSIDE LINE'S coverage of Glasgow Warriors is powered by MCCREA FINANCIAL SERVICES.

About David Barnes 3040 Articles
David has worked as a freelance rugby journalist since 2004 covering every level of the game in Scotland for publications including he Herald/Sunday Herald, The Sunday Times, The Telegraph, The Scotsman/Scotland on Sunday/Evening News, The Daily Record, The Daily Mail/Mail on Sunday and The Sun.

Visitors’ errors punished by ruthless hosts during second half …