THE question already being asked is: Who can stop Melrose?  At the Greenyards in round four of the BT Premiership, Glasgow Hawks’ first half performance briefly suggested that they might be the club to put the brakes on the juggernaut, but they conceded four tries after the interval and that notion was firmly scotched by the end of the game.

Melrose hid their light under a few blades of grass in the first half to trail 10-6 at the break only to revert to what they are so good at, competitive work at the contact area, a refined mauling technique – if that is not a contradiction in terms – and the ability to deploy pace and slick handling skills behind the scrum with devastating effect.

This was a fourth successive bonus point win for Melrose, who have now amassed a total of 25 tries in their league campaign thus far. It is a prodigious total at this level but one that reflects a mature and a very well coached team at the top of its game. 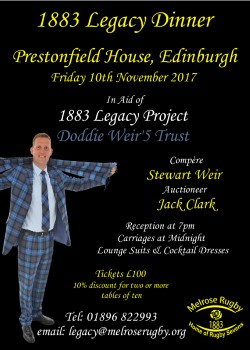 What made the Melrose win all the more impressive was that the Borderers were up against a very good Hawks side.

“They’ve got some really good young players. I thought George Horne was outstanding for them,” observed Rob Chrystie, the Melrose coach. “For the second half we tightened up a few things and were a lot more accurate at the breakdown. Otherwise it was about keeping on playing with the same style. I thought the bench made a big impact today. There are some really good quality players on the bench. We have a competitive squad but that’s what drives up standards.”

Melrose again had the luxury of Edinburgh and Scotland Sevens player James Johnstone being made available, and his impact as a second half replacement was enormous, begging the question of why Edinburgh have not used the talented centre in the PRO14?

For Hawks, the disappointment of losing heavily after leading at half time was palpable, and in the event coach Finlay Gillies did not offer up too many excuses for his side’s defeat.

“The yellow card [Matt Smith] cost us quite a few points. The way they win is by mauling the life out of you. They’re just clinical, more so than any other team in the Premiership. But that is what we should aspire to,” he concluded.

It certainly did not help Hawks that they lost their go-to line-out jumper Kiran Mcdonald and then suffered second half injuries to both starting centres, and replacement Jack Steele.

“It was still a lot better than when we were here last season and ended up with just twelve players on the field,” recalled Gillies.

Impressive for Hawks were prop Steven Findlay and second-row Andy Kirkland, who had a high work-rate and pulled off several excellent crucial tackles, notably a first half try-saver on Craig Jackson.

Hawks certainly showed their mettle in the early exchanges before making the most of turnover ball with a surging counter-attack which saw full-back Robert Beattie making ground before sending the scoring pass to centre Brendan McGroarty.

Horne converted, and after Jackson had opened the Melrose account with a penalty, the Hawks scrum-half replied in kind. Then, with half-time approaching, Jackson put over his second penalty goal to leave Melrose trailing 6-10 at the break.

It soon became apparent that Melrose were intent on regaining lost ground by opening the second half with a display of dynamic rugby. Their reward was a close range try by scrum-half Murdo McAndrew and the conversion by Jackson.

Then the expected. From a penalty-created line-out the Melrose forwards mauled effectively to power their way over for a try attributed to hooker Russell Anderson.

Horne briefly checked the Melrose momentum with a penalty goal but that was to be the last points of the game for Hawks. Thereafter, aided by Smith’s spell in the sin-bin for tripping an opponent, Melrose took control of the game: their pressure producing a second try for McAndrew after the Hawks’ line had been put under siege. Jackson added the conversion points before kicking his third penalty goal of the match.

Melrose’s fourth try came with unexpected ease from a quickly taken tap which allowed replacement Ruairidh Knott to slip over without so much as a hand laid on him, Jackson’s conversion providing the final points of the match.

Man-of-the-Match: Melrose and indeed Hawks provided a number of candidates but with his fifteen-point contribution and his commanding presence in the home side’s midfield, Craig Jackson was the stand-out player.

Talking point: Melrose have set a scorching pace in the BT Premiership and at present look unassailable. The challenge for the other clubs is to match Melrose. The Premiership desperately needs this. Melrose have also set the blueprint for success and with semi-professionalism coming ever nearer the Greenyards club looks certain to be one of the ‘Super Six’.

About Alan Lorimer 274 Articles
Scotland rugby correspondent for The Times for six years and subsequently contributed to Sunday Times, Daily and Sunday Telegraph, Scotsman, Herald, Scotland on Sunday, Sunday Herald and Reuters. Worked in Radio for BBC. Alan is Scottish rugby journalism's leading voice when it comes to youth and schools rugby.