AYR silenced the doubters and got their title defence back on track with a solid performance featuring some excellent rugby that was too much for a Currie Chieftains side that failed to hit the heights of recent weeks.

“We had said that over the last couple of weeks we had given Hawks and Melrose too much of a head start. Our preparation was really good during the week. Some of the senior guys have spoken really well – Grant Anderson and Scott Sutherland saying what it means to play for Ayr and win for Ayr – and it was great that they led from the front,” said winning coach Callum Forrester.

“There’s definitely learnings to be taken from it. We had opportunities that we didn’t take. But, in terms of where we are and players getting used to winning again, I’m really pleased with the performance.”

His delight was in sharp contrast to the mood in the home camp, where frustration was the overriding emotion for Ben Cairns.

“It was just really poor from us. That’s not the standards we set ourselves. We’ve talked a lot about setting our own performance levels – it’s not about the opposition, it’s about what we do from week to week, and that was just miles off what we need to be bringing to any game, never mind against Ayr who had it all to play for after losing two home games in a row.”

Ayr may have struggled to hit their own high standards over the opening weeks of the campaign but they were on song from the outset in this encounter with two tries in the opening 13 minutes. The first was reward for a period of intense pressure. The home defence was admirably resolute as the champions launched a multi phase assault, but Ayr found a way through in six minutes when the ball was popped back to Pete McCallum, who crashed over, leaving Scott Lyle a straightforward conversion to extract all seven points

The second score, seven minutes later, was a simple affair. From a free kick 35 metres out, slick handling saw the ball out to Craig Gossman, who had a clear run down the left wing before dotting down. Lyle again added the extras.

The Chieftains tried hard to respond but there was an uncharacteristic edginess and lack of patience to their play that prevented them from breaking through. Indeed, but for two forward passes, Ayr might have been further ahead.

The pressure did eventually pay off for the visitors and by half time they were 24-0 up. Lyle banged over a penalty then added the conversion after McCallum had taken advantage of a break from Danny McCluskey to cross for his second try.

The Chieftains had an opportunity to open their account before the break, but Jamie Forbes was off target with a penalty effort. Then with the final play of the half, Thomas Gordon freed Ben Robbins, who darted in at the corner only to see his effort chalked off for obstruction by Gordon on the last defender.

Ayr restarted well but failed to add to their total. And life became a little more tricky when Sutherland was despatched to the sin-bin for ten minutes. In his absence, the Chieftains clawed their way back into the match when a quickly taken line-out caught out the visitors and gave Robbins a chance to show his pace as he hurtled down the wing for an unconverted score.

However, a mounting error count prevented any further narrowing of that gap until the 73rd minute when Robbie Nelson sent Harvey Elms in for try number two. Belatedly, the hosts came to life and with a minute plus a lengthy period of injury time to play, Forbes dashed over from close range. However, with a narrow defeat bonus beckoning, he watched in horror as his conversion attempt from in front of the posts rattled back off the bar, leaving the Chieftains empty handed. 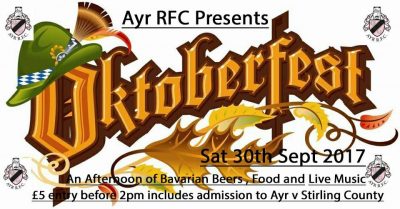 Man-of-the-Match – Many contenders, manly in pink and black, with George Hunter and Scott Sutherland making immense contributions, but narrowly pipped by Pete McCallum who showed his leadership skills and bagged a try double.

Talking point: On this showing, it’s clear that reports of Ayr’s demise are premature and, if they can build on this success, they will be contenders at the business end of the season.