THERE has been some classic winner-takes-all battles between Ayr and Melrose in recent seasons. If this weekend’s match [which kicks-off at 3.30pm at Murrayfield on Saturday] lives up to the standards set by these previous encounters then it should be a cracker.

WIGHT STICKS THE BOOT IN FOR MELROSE

An excellent goal kicking exhibition from Scott Wight eased Melrose past Ayr on a glorious afternoon in the the Borders, booking the home side a Scottish Hydro Electric Cup semi-final showdown against surprise package Haddington back at The Greenyards seven days later, and simultaneously crushing their opponents’ dream of a league and cup double.

Melrose forwards John Dalziel and Wayne Mitchell delighted the crowd with sublimely weighted chip kicks which put Callum Anderson and Jordan Macey in for scores, while Wight slotted six out of six from the tee. In truth, this was a pretty scrappy affair.

AYR GET THEIR HANDS ON THE CUP FOR THE FIRST TIME

Ayr enjoyed a double celebration on their first ever visit to finals day, winning the Scottish Hydro Electric Cup and (because this was also designated a league match in an effort to relieve a fixture backlog) also pocketing five precious points towards their bid to retain the Prmiership title they had claimed the previous year.

The final score suggests a comfortable enough win, but the outcome was only really secured in the final ten minutes when Ayr ran in two late tries. The first of these scores was scored in bizarre circumstances when Ayr centre Mark Stewart sent an interception pass straight to Melrose’s Allan Dodds, who immediately returned the favour by miscuing his pass towards John Dalziel, which Cammy Taylor capitalised on to score in the corner.  Minutes later Ayr’s other wing, Andrew Wilson, finished off a flowing move by beating two defenders with a show of speed and strength.

Melrose claimed the final touchdown of the afternoon through Jamie Murray but it was too late to offer Borders fans anything other than a little pride.

Unfortunately for Ayr they were not able to kick on from this triumph in the league and ended up finishing as runners-up to Currie.

A SHAME THAT ONE TEAM HAD TO LOSE

This was an absolute classic, packed with passion, skill and near limitless ambition. The result was in the balance right up until the final whistle and neither side really deserved to lose.

Two tries created by Ross Curle and scored by future Scotland cap Mark Bennett were key to Ayr’s victory, with Steve Manning and Damien Kelly also getting in on the act to establish 25-14 lead after 62 minutes. But Melrose struck back with a converted try from replacement lock Hayden Mitchell, setting up a tense finale in which Ayr heroically fended off wave upon wave of Border raids to secure their second Cup success in as many seasons.

REVENGE IS SWEET FOR MELROSE 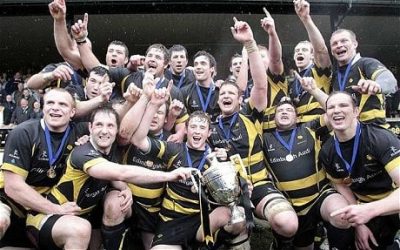 A week later the two sides renewed acquaintances with the league title on the table. Melrose needed to win or draw to secure their first league title since 1997, while Ayr needed to deprive the opponents of so much as a bonus point in order to set up championship decider against Currie the following week. In the event, revenge was sweet for the Borderers.

Ayr did their best to spoil the party, scoring the opening two tries through departing captain Damien Kelly, who was determined to make the most of his final weeks in Scotland before returning to his native Australia, but five Scott Wight penalties meant Melrose were well placed to pull away with tries from Garry Elder and Ross Miller.

Craig Chalmers’ last game in charge ended in disappointment for Melrose when a loose clearance kick with just two minutes of extra time left on the clock allowed Ayr one lost shot at glory. After four minutes of constant bombardment of the Borderers’ line, Ayr stand-off Ross Curle finally sensed a chink of light and managed to send Cammy Taylor over in the corner.

But the drama was not over yet. Referee Lloyd Linton appeared to give the score, then seemed to change his mind, consulted his touch judge and went off for a little think, before finally the arm went up to signal that Ayr had secured the RBS Cup to go with the league title they had claimed a few weeks earlier.

HOME COMFORTS NOT ENOUGH FOR AYR

Ayr had edged a 13-14 victory in their final league match of the regular season the previous week to secure home advantage in this play-off semi-final clash, but it did them no good in the final reckoning.

The home team were ten points ahead after 54 minutes thanks to tries for Cammy Taylor, Dean Kelbrick and Robbie Fergusson, and it might have been over as a contest had they not squandered a handful of other try scoring opportunities. But instead Melrose were able to battle back with a converted penalty try against Graham Fisken for collapsing a maul as it rumbled his team’s line, before Murdo McAndrew capitalised when Grant Anderson failed to deal with a bobbling ball to clinch the lead. Ayr bombarded the Melrose line for the final five minutes, but couldn’t get over the line.

Melrose simultaneously booked their spot in the BT Cup Final and claimed their fourth consecutive victory over Ayr when prop Nick Beavon burrowed over from close range with three minutes left on the clock to break the deadlock which had held for most of the second half.

Ayr took the lead through an early try for Craig Gossman, plus a conversion and two penalties for Frazier Climo, but paid a heavy price for letting their discipline slip. The hosts conceded a penalty try when they were down to seven forwards as a result of Will Bordill being shown a yellow card for killing the ball, and the levelling penalty from Joe Helps came when captain Ross Curle was on the naughty step for a dangerous no-arms tackle – before Beavon clinched it at the death.

AYR WIN THE ONE THAT MATTERS

The hosts made amends for their previous week’s setback with a dominant display to book a BT Premiership play-off showdown against defending champions Heriot’s.

After weathering an early storm, Ayr got their noses in front through a Rob McAlpine penalty and ever looked back, with Climo kicking eleven points and scoring try after charging down Nyle Godsmark’s laboured clearance to make it 21-0 at the break.

Will Bordill and Pete McCallum then got in on the act. Melrose tried to salvage some pride through a Richard Mill penalty and a converted Ruaridh Knott try, but it was Ayr – and more specifically Ross Curle – who had the last laugh with a long-range interception touch-down.

Ayr ended up losing the Grand Final to Heriot’s in controversial circumstances and have made no secret of the fact that the pain of that experience propelled them towards last weekend’s success at The Greenyards.

Melrose had home advantage by virtue of finishing the regular season four points clear at the top of the table, but the visitors weren’t going to let that divert them from their mission to claim the league title after so cruelly (and they believe unfairly) deprived of that accolade the previous season.

This might not have been a freewheeling exhibition of the expansive rugby that both teams can be capable of on their day, but what it lacked in artistic merit was more than compensated for in terms of heart-on-the-sleeve courage and sheer tension.

With a fairly strong the wind at their backs, Ayr mscled into a 3-9 lead at the break, which was extended to 3-12 early in the second half, before Rauridh Knott rumbled over with 17 minutes to go to put Melrose within striking distance. The home team laid siege to Ayr’s line during the final ten minutes and deep into injury time, but could find a way over, until veteran lock Scot Sutherland rose heroically into the Border sky to pilfer a line-out and secure a famous victory for the men from the west.

About David Barnes 3179 Articles
David has worked as a freelance rugby journalist since 2004 covering every level of the game in Scotland for publications including he Herald/Sunday Herald, The Sunday Times, The Telegraph, The Scotsman/Scotland on Sunday/Evening News, The Daily Record, The Daily Mail/Mail on Sunday and The Sun.