All very true, but the Report fails to mention –

Turnover is a key driver for the professional/international game – but it is a dangerous measure if costs are not being controlled or being managed equitably in the broad interests of all stakeholders. 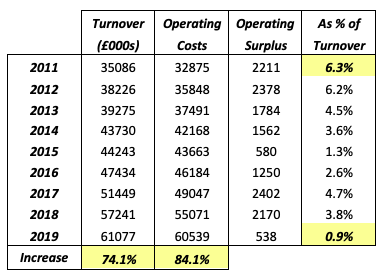 Six consecutive sell-out matches at Murrayfield (taking the sell-out run to 14 matches in total) contributed to a pleasing 27.9% increase in ticket income over 2018, albeit bolstered by the bi-annual extra Six Nations fixture and a significant cut from the Doddie Weir charity match against Wales at the Principality Stadium in November.

Other income streams were not, however, quite so robust.

‘Broadcasting’, ‘Commercial’ and ‘Other Income’ brought in £44.9m in 2018 and £45.3m in 2019 – so 75% of total turnover was effectively static – and the thriving 25% is totally dependent on punters continuing to pay the ever-increasing ticket prices for more and more Scotland games outside the meaningful Six Nations window. It is not a healthy model – especially when expenditure is rising by 10%.

Colin Grassie claims in his Chairman’s Review that: “In the current commercial market we have had to be nimble and proactive in order to find solutions that allow us to be competitive at the top level of the game whilst fully funding and supporting the grass roots. We have done this by seeking external investment; forming partnerships in overseas rugby market places with potential growth; diversifying revenue streams; and working with other Unions to capitalise on global media and marketing opportunities.”

Hopefully he will see fit, at the AGM, to share these phenomena and their implications with his stakeholders.

It is incredibly worrying and critically revealing that neither Grassie, Mark Dodson nor Dominic McKay so much as mention operating costs in their respective reviews/reports, let alone acknowledge that expenditure in 2019 grew 3.2% faster than turnover, inflated we presume by payment of non-disclosure agreements and unquantified investment in overseas clubs such as Old Glory DC and Stade Nicois.

Scottish Rugby is, of course, a ‘people’ business, with employment costs for the year running to £31.5m, or 51.6 % of turnover. Effectively, for every £1 that came through the door, 52p went out in wages. 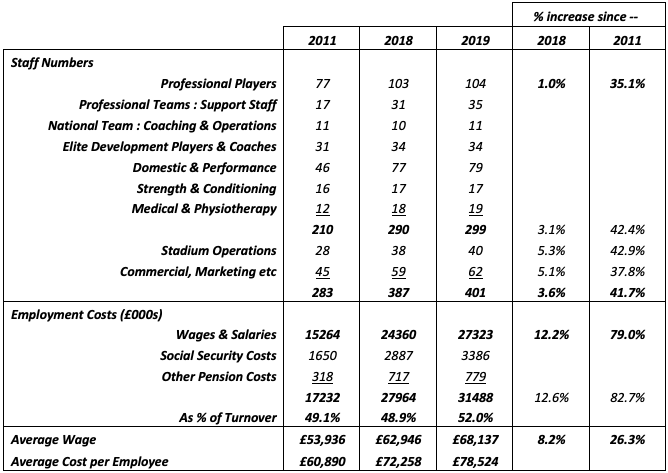 Scottish Rugby happily divulges the remuneration details of the non-executive directors in the Annual Report but does not disclose any such information for the executive directors. In fairness, they are not legally obliged to do so anywhere other than in the statutory accounts which must be lodged at Companies House within nine months of their accounting reference date of 31st May.

Last year’s statutory accounts for Scottish Rugby Union Limited were lodged on Thursday 2nd August 2018, ahead of the AGM  on Saturday 4th August, meaning it was very difficult for delegates to have sight of them until after the AGM.

In the real world, such behaviour would be considered bad form. In the cloistered world of Scottish Rugby, it is symptomatic of the disdain shown by the executive to their principal stakeholders. 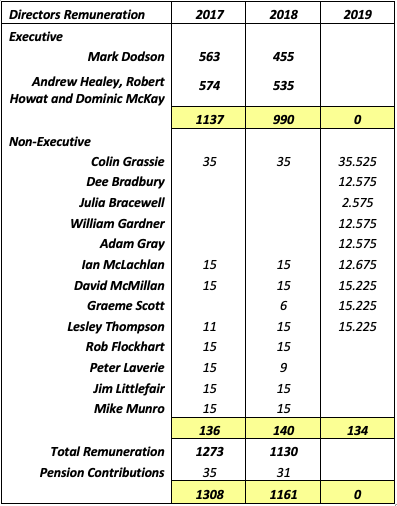 The Report does nothing to clear the verbiage of the July 2018 ‘Club Funding Overview’, nor does it alleviate concerns that Super 6 will impact on the ‘Club Support & Development’ budget.

The £3.1m Club ‘Support & Development’ spend for 2019 presumably includes the £1000 ‘sweetener’ which Dodson tossed the clubs’ way at last year’s AGM, but when all is said and done, £187,000 (assuming that there are still 187 clubs) is small beer in the grand scheme of things.

In his letter to the clubs accompanying their copy of the Annual Report, McKay boldly declares “we are now free of debt” – which is patently not the case. The debt is still there – it has simply been shunted up the balance sheet.

Back in the real world, the ability to repay debt is a function of an operating surplus – and has nothing whatsoever to do with turnover.

Grassie writes in the Annual Report: “Our commercial income continues to grow and I am pleased to report that this year’s turnover of £61.1m shows an increase of £3.9m on last year. With a further improvement in debt position the organisation’s financial good health has allowed us to explore strategic investment and commercial opportunities”.

Then, Dodson throws in his tuppence worth with: “I’m pleased to report this year has again seen our financial results achieve an increased turnover of £61.1m and further improvement in our debt position”.

Grassie compounded the felony in yesterday’s media release: “We are pleased to report that we are in our best net year-end cash position for over 25 years as a direct result of balanced and sustainable financial management of the organisation – reducing debt while working to increase incomes and investment in all areas of the game.”

Grassie goes on to say that: “At its height, cash debt was at a level of £23m”. Whilst he needs to clarify what he means by “cash debt” and when he thinks that it reached £23m, there can be no denying that the BT deal was a game-changer in 2014. However, concern that a scarce resource has been gradually squandered over the past five years takes on a whole new dimension as the CVC bandwagon rolls its way around the corner.

Dodson, Grassie and McKay are not stupid but they appear to think that the rest of us are. Would you buy a second-hand car off them?

Why does the SRU have a lawyer instead of a Director of Rugby on its Board?