Dominic McKay in his letter to the clubs dated 31 July:

“I am delighted to enclose a copy of our Annual Report for 2018-19 which highlights a historic year for Scottish Rugby, where we achieved record turnover and a debt-free position.

“We have made great progress in the last year.

“We are now free of debt putting the organisation in a strong financial position.”

“Our commercial income continues to grow and I am pleased to report that this year’s turnover of £61.1m shows an increase of £3.9m on last year. With a further improvement in debt position the organisation’s financial good health has allowed us to explore strategic investment and commercial opportunities”

And then at the AGM:

“Operationally we are debt free.”

“I’m pleased to report this year has again seen our financial results achieve an increased turnover of £61.1m and further improvement in our debt position.” 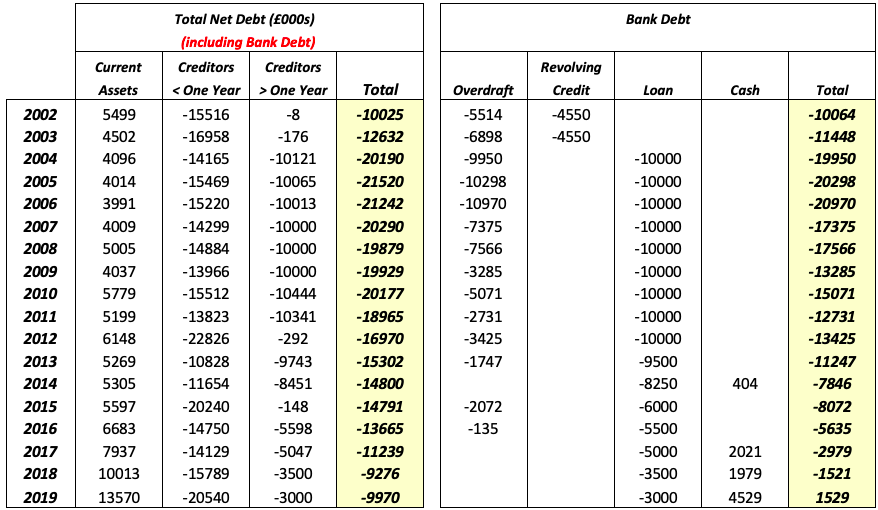 “Since before I got here, the media, and indeed ourselves, have looked at the debt position in the Union with regard to the bank balance. It is absolutely acknowledged that on the balance sheet there are other forms of debt – debentures, working capital debt, and liabilities. What we have reached this year is, I guess, a milestone that we have looked to be reaching for some time, which is that the net cash position in the year end is in a positive place.

“Obviously, the working capital varies from day-to-day, and month-to-month, so elements of that are merely due to the timings of income receipt and so on.

“Having said that, the reason we have a net average debt position as well is to have a better view of the position. So, the average position itself is in a positive place for the first time in over 25 years. That gives us a position where we can look to invest properly, to look at debt and so on in a way which traditionally businesses would look at it.”

“Every year, and for the last 20 years, we’ve looked at our net cash position and that’s what we’ve always classed as where we are going to be from debt free. It was £23 million at its highest peak, when I came it was 14.4m, and now it is zero.

“We always have debts in other parts of our business, around the debentures and whatever, but the key metric we’ve used, the government use, the BBC uses, and everybody talking about our debt for the last 25 years has used, has been around the net cash position.

“The issue is quite straight forward. We have a rigorous audit through PWC, their view is that our accounts are absolutely solid, and they’ve been passed by PWC. Andrew Healey has come out this morning at the meeting and told you exactly where we stand, there’s a transparency in exactly what we are saying going back to the debt that we talked about there, we’ve always used that as the basis of our net cash position.

“We’ve also got working capital which goes up and down depending on when we’re paid, when the World Cup subsidy comes in, because as you know in World Cup years we don’t have any Autumn internationals so we get our money up front from World Rugby to subsidise that, but it is not as much as we would earn on our own, so we make a loss there this year. There are lots of complicating factors, but the clear factor is that the metric that we’ve been measured against for the last 20 years is at zero.

“It depends in what measure you use. If you look at Marks and Spencers’ figures, any of the top 100 now, you’ll get a different opinion of them, that’s what analysts do. All we’re saying is that we’ve been consistent in our measurement and our metric.”

The continuing debt is not a major problem per se – but denying it is symptomatic of the disdain Mark Dodson habitually shows for the stakeholders in Scottish Rugby – and it is being used to camouflage an open wound.

Debt can only be repaid out of operating surplus or by fresh investment.

Dodson is using the ostensible reduction in debt to project an image of financial well-being.

In this light, Scottish Rugby’s finances are not as strong as the Annual Report and AGM pronouncements would have us believe. At a time when we are expecting game-changing private equity investment into the sport, we need more clarity on the true position, and reassurance that the people running the game are not going to sell the jerseys.

THE OFFSIDE LINE’S coverage of grassroots, youth and schools rugby is supported by MACRON STORE EDINBURGH (COLIN CAMPBELL SPORTS). Click HERE to contact the team for information on how they can help with your club or school’s kit supply demands.