WHAT a difference a week makes. Seven days ago we were all scratching our heads, trying to work out how the Lions could possibly avoid a Test series whitewash at the hands of the rampant All Blacks.

Luck has played its part in the stunning revival of the touring side’s fortunes, with Sonny Bill Williams’ dismissal after just 24 minutes of last weekend’s second Test in Wellington handing them a huge boost. But the Lions still had to take advantage, and it’s not as simple as saying that 15 players should always win against 14. If rugby was as easily deconstructed as that then it would be a pretty boring game.

When the opposition receives a red card, players can’t help but drop-off a little bit in terms of their focus. You’ve got to remember that these guys are playing right on the edge, at peak concentration level – for most of them it will be the biggest game of their life – and it is inevitable that there will be this uninvited feeling after a red card that the game is now going to be a little bit easier. The margins are so tight at this level that a little change in mind-set can make a huge difference.

And the reverse was true for the All Blacks. As soon as they lost Williams, they were always going to find an extra gear from somewhere. From that moment on, their backs were against the wall – but that will have had a galvanising effect.

If you look at the start of the game, before the sending off, the Lions played the better rugby, and were doing really well at negating New Zealand’s game-plan.  So, it was already set up to be a really good Test match before Williams got his marching orders.

Rather than spend time thinking about what might have been had it stayed 15 against 15, both teams will have focussed instead this week on what actually happened during the game, and from both perspectives the big lesson was that the Jonny Sexton and Owen Farrell partnership at stand-off and inside centre is going to be key if the Lions are going to clinch the series.

The passage of play below comes from the seventh minute. Elliot Daly is the ball carrier off first phase, which means the Lions are not going to get the same impetus as when Ben Te’o was in the number 12 jersey (and not surprisingly they used Jonathan Davies for this role, especially off lineout maul, more and more as the game progressed) –

By the time we get to this next clip, Alun Wyn-Jones and Jamie George have both carried the ball without really creating any momentum, but then we start to see the true value of the Lions’ midfield axis, with their handling and vision asking the All Blacks a lot of really tricky questions –

Another two phases later we get this exquisite dummy and delayed pass from Sexton, followed by a lovely back-handed flip pass from Davies, then an elegant one-handed take from Wyn Jones, before Daly eventually gets a small gap on the wing –

This is when the excellence of the Sexton-Farrell partnership really comes to life.

Sexton is one of the first on the scene when Daly gets tackled, but doesn’t get sucked in and manages to regenerate straight away. Meanwhile, Farrell jumps straight in at ten and takes the ball to the line, and by the time he offloads, Sexton has swept round behind to take the pass and move the ball wide –

This creates the overlap shown below – 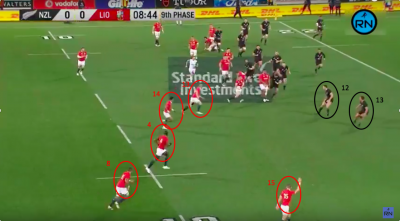 The All Blacks also have Rieko Ioane off picture on their left wing, but the odds are still stacked heavily in the Lions’ favour at this point [five-versus-three] – and it is all down to Sexton’s quick regeneration and Farrell’s ability to seamlessly slot in at ten.

It is a shame from the tourists’ point of view (and a reprieve for the All Blacks) that Davies comes flying in short and doesn’t hold the pass.

The ball bounces backwards, Anthony Watson manages to recover possession, and after a strong run by Vunipola, the Lions almost manage to get away down the right wing, with Farrell (at first receiver) and Sexton (at second receiver) combining to send Liam Williams into space –

The slickness of this Sexton and Farrell combination is remarkable given that this was the first time the two players had started a match together. The key improvement on this front the Lions need to make ahead of Saturday is ensuring that the players around them  have a better feel for what this pair are going to create.

The clip below comes from a passage of play in which a Lions lineout catch is driven backwards, before key man Davies hits a short line to get his team back on the front foot. Itoje then takes it on, before Sexton and Farrell combine to stretch the All Blacks defence across to the right wing.

When the ball starts to come back, Farrell finds himself in possession in midfield with potentially a six or seven against two overlap on his left. But once again the Lions fail to fully capitalise on this opportunity, this time because a number of forwards are either too tight to Farrell or running too flat. They are just not used to playing with that width –

What the Lions have lost is the abrasiveness of Ben Te’o in both attack and defence. Davies stepped up to the plate in doing some of the hard yards with the ball in hand last Saturday, and he will do so again this weekend. Meanwhile, Sean O’Brien will continue to drop out of the lineout to bolster the midfield defence on New Zealand’s ball. But the clip below demonstrates the Lions’ vulnerability to the likes of Ngani Laumape and the recalled Julian Savea using their considerable pace and power to crash up the middle of the park off scrum possession –

This will be a key battleground on Saturday, and with a full complement of forwards, the All Blacks will be better equipped to build up a head of steam if they are given such easy targets in midfield.

Here is another example from the first half –

The Lions end up conceding a penalty, which you would normally expect Beauden Barrett to turn into three points, but he had a bad day kicking at goal last Saturday – his younger brother Jordie is likely to take the kicks at goal this Saturday.

This does, however, bring us nicely on to an issue where the Lions can make life much easier for themselves without having to do anything revolutionary. A recurring theme of this tour has been their failure to keep the penalty count under control, and on Saturday they conceded 13 to New Zealand’s eight, which is bad enough without taking into account the fact that they were a man up for three quarters of the game meaning there was absolutely no need whatsoever to take the risk.

Looking at it from a coach’s perspective, you don’t mind the penalties that are 50-50 and the referee has gone against you, or if you are under so much pressure that it is the only way to stop your team being overwhelmed – but that wasn’t the case last Saturday. Too many of the penalties were complete coach-killers.

After half-time, the Lions give away six penalties in 16 minutes – which is absolutely nuts. You are hoping to concede six or seven penalties in the whole match – never mind in 16 minutes, when you are a man up, and you’ve just had your half-time team talk. That same sort of indiscipline against 15 men at Eden Park on Saturday will completely kill the Lions chances.

Mako Vunipola was a chief culprit in giving away cheap penalties, but he has kept his place because he has been one of the team’s best ball-carriers and most impactful players on the tour, and the Lions don’t have another player in that position with the same ability to take the game to the All Blacks.

In fairness, Vunipola was not acting alone. Itoje was another culprit, offering up some really cheap penalties through that poor-disciplined third quarter. Like Mako however, he is also one of the Lions most impactful players and had to start the decider.

Fortunately for Itoje, and the Lions, Barrett misses from in front of the posts.

Then there is this passage of play, in which Itoje is initially penalised for another offside at the ruck. The Lions lock may argue that this is a tackle only situation, however, there is no way he knew this at the time. Referee Jerome Garces plays advantage and Itoje is lucky he is not pinged for not rolling away after Dagg’s half break three phases later.  Barrett’s kick through comes to nothing and Garces goes back to the original offence, only for Barrett to miss another kick at goal.  At this stage, a yellow card for persistent infringement is surely becoming a distinct possibility for Itoje.

In amongst all this there was one successful Barrett penalty after a high tackle from Connor Murray on Anton Liencrt-Brown in the 45th minute, all of which meant the Lions trailed by three points before Vunipola’s double blunder.

However, if you take into consideration that missed Barrett penalty in the first half, plus the two conceded by Itoje, it could just as easily have been a twelve point gap, and that would have given the match a very different complexion going into the final quarter.

There is no doubt that the Lions rode their luck last Saturday, but that’s what good teams do. They know they need to be better this week, when the All Blacks will come back at them with all guns blazing. The Sexton-Farrell axis (with Davies providing the physicality at outside centre) gives them cause for optimism – so long as they can cut out the needless penalties.

About Ben Cairns 3 Articles
Ben played centre for Edinburgh and Scotland before moving into coaching. He is currently head coach at Currie Chieftains.