THERE are three areas which I imagine the Lions coaches really had to think long and hard about during the selection process before naming the team to take on New Zealand in Saturday’s First Test in Auckland: second-row, back-row and back-three.

Selection essentially comes down to what you value most from your side, and they will have picked the second-row and back-row combinations based on: line-out; ability to get over the gain line in attack; and ability to slow down All Blacks momentum in defence.

When they don’t have the ball, I believe the Lions will aim to stifle the All Blacks by hitting them high and keeping them off the ground for as long as possible. Ideally they will want to turn it into a maul and get the turnover that way, but failing that they’ll look to hold man and ball up for long enough in the tackle to make it a bit of a mess when it does eventually hit the deck.

Sean O’Brien and Peter O’Mahony are big men who excel in that sort of wrestling match. That’s the Irish way, so they are experts at it. Although, interestingly, neither of those guys were playing when Ireland defeated the All Blacks in Chicago last November.

Line-out defence is also one of O’Mahony’s big strengths so that gave him an edge, while O’Brien is a better carrier off slow ball in tight situations than Sam Warburton or Justin Tipuric.

Warburton’s great strength is his ability to jackal at the breakdown but I don’t see the Lions chop tackling and targeting the ball that way. The All Blacks are the best in the world at getting that first clearer in and blasting past the breakdown to generate speed of ball so it makes sense to take that option away by not letting them get to ground.

Once the game starts opening up and guys are beginning to get tired, Warburton will come off the bench and he’ll have a better chance of being really effective jackaling the ball, because there will be more runners isolated.

In the second-row, it must have been very difficult to leave Maro Itoje out of the starting fifteen, especially as his selection would mean a Saracens backbone to the line-out, which would give them some really good combinations.

Itoje is a phenomenal athlete with a massive work-rate and bags of aggression. He’s good in the tackle, he’ll get back on his feet and into position really quickly to give the Lions extra width in their defensive line, and he hits pretty high which suits this tactic of stifling the All Blacks with Irish style choke tackles.

In the end, Alun Wyn Jones’ experience probably gave him an edge. I also don’t see him as a natural bench player, while that aggression and athleticism of Itoje makes him a really exciting prospect as an impact player during the last 30 minutes (although my suspicion is that he is fit enough to sustain that intensity for the full 80 minutes if asked to do so). Itoje is also an option for the back-row depending on injuries and how the game goes.

George Kruis is in the team because he runs the line-out, and he has also given a bit more than I expected around the park on this tour.

The back three is where the real surprises are but I think the right calls have been made based on form. Liam Williams has been consistently better than Halfpenny this year and although his kicking game is not quite as good, he has definitely offered more in attack recently.

Williams got that yellow-card against the Blues when he collided with Matt Duffie in the air twice in as many minutes, but I would say he was slightly unfortunate there after getting himself into a poor position on the chase. He has always been very secure under the high ball as a full-back.

You know what you are getting with both Halfpenny at full-back and George North on the wing, while Williams and Elliot Daly offer much more flair. This back three selection does suggest that the Lions are more committed to having a go off transition ball than I had anticipated, which has got to be a good thing if you are looking at it purely as a fan of exciting rugby.

But the key for the Lions is still going to be their ability to stop the All Blacks playing, because when any New Zealand side gets quick ball and an opportunity to play against an unstructured defence they become almost impossible to handle, as the clip below from the Highlanders match demonstrates –

After a quick tap penalty and two really dynamic phases, the Highlanders have created a one-on-one between Malakai Fekitoa and Jonathan Joseph, which is really hard to defend against with so much room either side. From there they get over the gain line and they have dragged the Lions full-back and far side winger across, so that when they come back they have 20+ metres of space on the opposite wing. Not only that, but that outside channel is being defended by scrum-half Rhys Webb, with props Kyle Sinckler and Joe Marler on his inside, and Jack Nowell desperately trying to get back across. 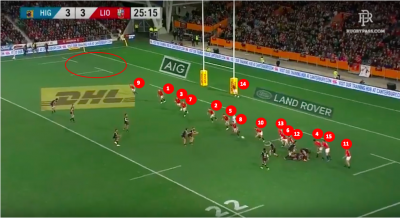 This is not the sort of situation the Lions are going to want to find themselves in on Saturday when they know the All Blacks are going to have Kieran Read – who likes to hold in the wide channel – standing there waiting for the ball.

In that situation, you can bet that Beauden Barrett will fancy doing some real damage with one of his pinpoint accurate cross-field kicks, which would mean Nowell (on Saturday it will be Anthony Watson) scurrying across to challenge Read in the air. Even if the number eight doesn’t score himself, he will have at least one more All Black support runner coming in on a short line, against a Lions defence which has been pulled into the middle of the park.

Speed of ball is key in every game but more so in this match. If the Lions can get on top in terms of knocking ball carriers back behind the gain line, or hold them up to cause that breakdown to be slow, then it will be very hard for the All Blacks to play that natural free-wheeling style of theirs. But if the All Blacks get fast ball then the Lions are not going to be able to get set quickly enough and they either won’t get off the line in time to pressurise the opposition, or if they do they are going to be narrow and room will open up for the All Blacks on the outside.

The Lions will commit only two to the tackle – a double-team hit and try to hold the ball carrier up – while everyone else folds into position. The more time they give themselves to do this, the wider they can build the defensive line, and the harder it will be for the All Blacks to get outside them.

In the clip below, O’Brien and fellow Irishman Tadhg Furlong hold up Luke Romano in the tackle, which allows their defensive line to get on the front foot when the ball eventually comes back the way it came.

The tourists tend to bring the scrum-half into the defensive line to give themselves extra width so that they can move forward with full pitch coverage, and that’s where this system is vulnerable because it leaves a gap between the first defensive line and the back three.

The All Blacks will look to exploit this chink in the Lions’ armour with three particular ploys.

Firstly, with a pick and go through the middle of the ruck –

Secondly, if they can get speed of ball then the first receiver in midfield can make the initial puncture before offloading behind the defence to a support runner coming on a short line, which we know is a Sonny Bill Williams speciality –

Finally, there is the kicking option, which will be most effective for the All Blacks from their own half because there is a bit more separation between the full-back and the winger.

As discussed earlier, the cross-field kick will be a favoured ploy, but they may also look to work it into midfield and suck the winger inwards before threading through. This threat will have been a consideration in selecting Daly (who is much sharper on the turn) ahead of North.

These kicking options are most effective if you can manipulate the full-back first, so expect to see the All Blacks go wide in the first instance to pull the full-back across (and they will look to get him embroiled in the contact if possible), which will make it even harder to get back across as play switches back the way it came.It is going to be a real contrast of styles. One team is trying to offload out of tackles, keep the ball moving and play into space. The other one is looking to dominate gain line, set piece and the penalty count.

In fairness, the back-three selection suggests that the Lions will be looking to have a real go off transition ball, but that remains a secondary consideration behind dictating the tempo through being aggressive, direct and well-organised in both attack and defence.

A quick look at the centres tells you exactly what kind of game the Lions want to play.

Ben Teo has pushed himself into the Test team. There is a question mark about his distribution but all the Lions need him to do is run through people and get the team across the gain line. He will hit high in defence as well because of that rugby league background.

Jonathon Davies has been the best number thirteen by a mile. He’s not done a huge amount of fancy stuff, but has fulfilled the basics really well. He’s bigger and more physical than Jonathon Joseph, he is more reliable defensively and his kicking game is stronger. He may not possess the same scintillating pace as Joseph but as mentioned earlier, selection comes down to what you value most. It is about dominating physically, winning the gain line battle and sucking the life out of the All Blacks.

I know which style I like best, but it is about what is most effective for the team. This is international rugby and it is about winning.

I’m certainly more optimistic about the Lions’ chances today than I was this time last week. They have made huge strides in their last two performances with signs that the players are now on the same wavelength.

It’s going to be one hell of a battle.

About Ben Cairns 3 Articles
Ben played centre for Edinburgh and Scotland before moving into coaching. He is currently head coach at Currie Chieftains.