IT would be dangerous to underestimate just how fraught Scottish Rugby’s financial position is at the moment, and how severe the consequences of a few wrong turns could be.

News of the Scottish Government’s bail-out on 10th December was an immediate relief but ultimately a major humiliation for the sport.

When pressed on the apparent disparity between the money being made available by Holyrood to football (Scotland’s national game) and to rugby (a distant second), Joe FitzPatrick – Minister for Public Health, Sport and Wellbeing at the time – explained to the BBC last Monday night that:

“Football is getting £30m and there’s £20m to rugby, but the breakdown of that was all based on the advice I got in relation to how to make sure all of those clubs were sustained throughout the pandemic.”

The inference was clear. This ’emergency fund’ was required to keep the lights on at Murrayfield and Scotstoun. Scottish Rugby is being rewarded for failure.

But the critical question so far as the clubs are concerned is how much of this government support is going to filter down to the grassroots? Scottish football published a breakdown of where its money is being directed within days of the award.

Four days after the bail-out was announced, Scottish Rugby managed to produce audited accounts for financial year 2019-20 – five months late according to the organisation’s own bye-laws – having finally secured ‘going concern’ approval for the next 12 months from auditors PWC.

It is now clear that Scottish Rugby wasn’t ready for a World Cup year, never mind a pandemic.

“Ongoing trading operations were, as happens every fourth year, impacted by the RWC which reduced our income levels and increased our costs from what they might otherwise have been,” noted President Ian Barr and Chairman John Jeffrey in the introduction to the Annual Report.

But as General Counsel Robert Howat told us later on in the document: “The board reviews strategic priorities every year and during the year if required, and considers budgets against a four-year cycle.” So the drop in turnover can hardly have been unexpected and should have been provided for over the preceding three years.

Barr and Jeffrey also told us that: “The impact of the Covid-19 pandemic from February 2020 was material, in particular in relation to the deferral or cancellation of certain international and professional rugby income streams.”

The first game to be called off was the Wales versus Scotland Six Nations match which was scheduled for 14th March. Scotland did not lose a home international in 2020, although Edinburgh did lose three (potentially four) home games, including an 1872 Cup match, and Glasgow lost two home games.

The pre-Covid operating deficit was forecast at £1.0m against the actual deficit of £5.4m – a swing of £4.3m, which is almost exactly the shortfall in Six Nations broadcasting revenues from only 11 of the 15 games being played on schedule. Those revenues have presumably been delayed rather than lost, so should show up in financial year 2021 now that the games have all been played.

£1.3m was claimed through the Covid job-retention scheme in the period to 31st May, and playing wages were cut by £100k per month from April, with a saving of maybe £40k per month on executive remuneration.

In addition there was £7.9m additional funding from World Rugby.

Covid will, no doubt, hurt down the road – but its impact on the accounts to May 2020 was marginal.

A major lifeline has been the proceeds from the sale of a 28 percent stake in the Guinness PRO14 to CVC Partners private equity house. The deal was announced on 22nd May with four equal shares of £30m less expenses to Scotland, Ireland, Wales and Italy, and IRFU CEO Philip Browne indicated that it was to be spread over three years.

From last year’s ‘debt-free’ claims, we are now in a very different place. There is a £5.4m loan for the development of ‘Mini-Murrayfield’ on the back pitches at the national campus which falls to be paid this year, while the bank has agreed to provide a “working capital facility” of £11.8m and a “revolving credit facility” of £8.5m. This takes the agreed debt to just shy of £26m (not factoring in the possible £5m low-interest loan from the government). With debt at say £25m and debentures of £32m set against the valuation of Murrayfield at £41.5m, and Net Current Liabilities of £10.5m, it is little wonder that the auditors and bankers are nervous.

How did it get to this stage?

Rugby has blossomed as a spectator (if not a participatory) sport and as JFK observed “a rising tide lifts all boats”. SRU’s income growth in the last decade has mirrored, but not out-stripped, the other Home Unions. The idea that we have witnessed some sort of magical economic awakening is a myth.

As Dodson’s predecessor Gordon McKie pointed out to The Sunday Times in April: ‘The SRU headcount has grown to 450 from 280 since my time and the annual payroll has nearly doubled.” 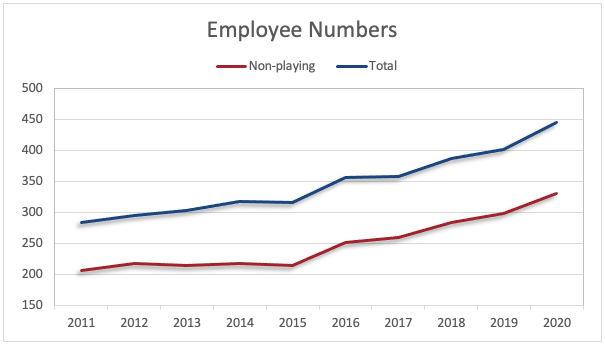 Yet at AGM(2) Dodson claimed: “When compared to the other home unions we are of similar shape and size when adjustment is made for ownership and out-sourcing of professional players”. That is simply not the case.

Dodson’s package dropped from £933k to £454k – but he remains the highest paid CEO in world rugby. Bill Sweeney at the RFU is on £430k, running an organisation four times the size of Scottish Rugby.

And whilst the details of Dodson’s Long Term Incentive Plan are welcome, the process appears suspect. You can put lipstick on a pig – but it is still a pig.

The non-executive directors (David McMillan, Lesley Thomson and Julia Bracewell) and the Council directors (Graeme Scott, William Gardner and Dee Bradbury) appear to have taken a 20% ‘Covid’ cut in their fees, but the non-execs at WRU and IRFU are not paid. Meanwhile at the RFU “as in prior years some non-execs have forgone their Board fees, and in response to Covid-19 further members of the Board agreed to reduce their fees” by an overall 59%.

Looking after the game’s lifeblood

Not only has Dodson overspent, he has not spent equitably. As McKie said back in April: “There has been a huge increase in the spend on pro rugby while the increase in support to grass-roots clubs is derisory relative to it being the lifeblood of the game.”

Meanwhile, the notes to the 2019 Annual Report indicate that post balance sheet Scottish Rugby had concluded the purchase of a 33.3% stake in Washington DC Professional Rugby (Old Glory) and this year’s report advises that Scottish Rugby have indeed bought a 28.4% stake for £651k (there is no explanation of why the stake had dropped from 33.3% to 28.4%).

“There is the expectation that this company will generate positive future cash flows and, as such, no impairment charge has been made against the Group’s investment in this company” – which appears extremely optimistic, to say the least.

There is no mention of other projects such as Stade Nicois and the partnership with Nagasaki.

Scottish Rugby was ill-prepared for the pandemic. The financial model was predicated on the assumption that future income would meet present operating needs.

As TOL’s commentary on 2019 Accounts pointed out: “The operating surplus for 2019 was down to just 0.9% of turnover which is simply unsustainable. There are no Capital Cash Reserves whatsoever.” And this was before anybody had heard of Wuhan.

Yet on 7th August, Dodson told us that there was no need for redundancies and that he would save £14m by belt-tightening. Then at AGM (2) on 26th November he claimed that “the business is stable and in the process of securing its medium-term future” and “Scottish Rugby was a strong business going into this pandemic and we will be a strong business when we come out of it”. Clearly not what he told Joe FitzPatrick and the Scottish Executive.

News over the weekend that the whole country will plunge into stage four lockdown from Boxing Day for at least the next three weeks blew a giant hole in Scottish Rugby’s always fanciful “base-case cash-flow forecast” of having 50% attendances at Murrayfield for the Six Nations and 100% attendances for the Autumn Tests.

We are now looking at Scottish Rugby’s “severe but plausible downside scenario” of no crowds in the Six Nations and 25% attendances for the Autumn Tests, for which we are assured that “there is still sufficient liquidity headroom throughout the going-concern period”. But what is the business and the sport in this country going to look like on the other side?

With Finance Director Andy Healy off again – he only managed nine out of 18 Board meetings last year – Oliver Colling is crunching the numbers on an interim basis. He was hired from Collinson Grant, the management consultancy firm from Dodson’s home town of Manchester which also conducted the elusive review into Scottish club rugby that culminated in the controversial Agenda 3/Super6 programme.

Scottish Rugby is facing an existential threat. Dodson has already told us that a CVC deal for the Six Nations is on the cards, and if all else fails he could ask the Scottish Government for even more assistance. The doomsday scenario is that we hit the wall and the clubs are forced to forfeit their ownership of Murrayfield, and to peddle their heritage for whatever cash they can get their hands on.

The audited financial statements for the year to 31st May 2020 will be placed before the third and final tranche of this year’s AGM tomorrow [Tuesday] evening.

* This article has been corrected. The initially published figures comparing the growth of SRU turnover to the other Home Unions was wrong.