SCOTTISH RUGBY’S Annual Review, which was issued to clubs last Thursday, was high on gloss and low on substance. Along with President Ian Barr’s welcome, there is a ‘review’ from Interim Chairman John Jeffrey, and two further ‘reports’ from Chief Executive Mark Dodson and Chief Operating Officer Dominic McKay, yet no detail on the two critical issues of funding and player numbers – and no mention whatsoever on strategy or budget.

We are told that –

We already knew that the accounts would not be available in time for tomorrow [Thursday] night’s AGM2.1, but we have been promised a presentation on the current financial position. The clubs will be expecting something more meaningful than the management speak in this document.

“The deal with CVC to become a partner in PRO14 not only provided funds to Scottish rugby at a time when cash flow was restricted , but by working with commercial investors , we hope to drive new levels of fan engagement and experience across the game.”

What does that mean?

“Whilst the accounts had been prepared and were well advanced, additional steps were needed before the accounts could be signed off. It was noted that none of the additional requirements were a cause for concern, and indeed would provide an additional level of assurance in the current pandemic.”

Does the Board’s Audit & Risk Committee, chaired by Lesley Thomson QC, share this view – and will she be saying so at the meeting?

Certainly, Scottish Rugby was ill prepared for the coronavirus pandemic. The financial model was predicated on the assumption that future ticket income, broadcast revenue, sponsorship and advertising sales would meet present operating needs. Net current liabilities were shown as £6.9m in May 2019 statutory accounts.

As TOL warned on 15th August 2019: “The Operating Surplus for 2019 was down to just 0.9% of turnover which is simply unsustainable. There are no Capital Cash Reserves whatsoever.” And that was before anybody had heard of Covid-19.

Yet whilst the other Home Unions have addressed the Covid threat pragmatically and propitiously – 139 redundancies at the RFU, a £20m bank loan at WRU and government support for the IRFU –
all we have heard from Dodson has been the suggestion on 7th August that he could save £14m through belt-tightening and that there would be no need for redundancies. That seemed fanciful at the time for a business which directed 52 percent of last year’s £60m costs towards wages, and now we learn that the headcount has jumped from 401 in May 2019 to 458 in May 2020 (compared to 295 in 2012). 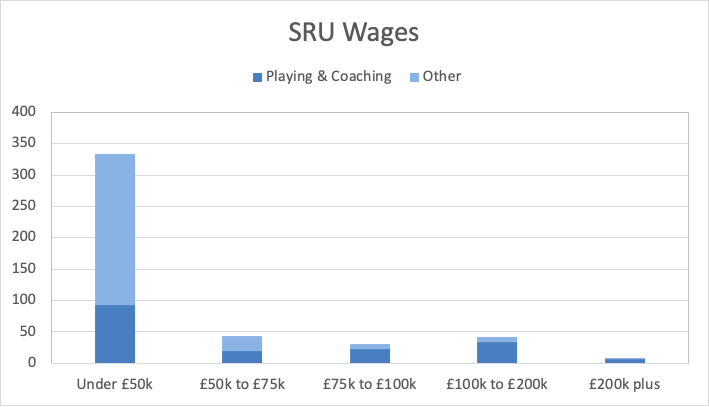 It is now six months since the financial year-end and despite the four month requirement stipulated in the Union’s bye-laws, the clubs have still not had sight of the accounts. 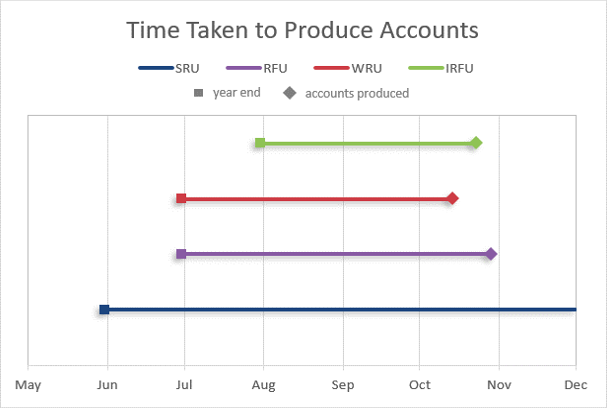 The Annual Review tells us that the Chief Financial Officer has missed nine out of the last 18 Board meetings. We wish Andrew Healy well, but this is a problem which needs to be addressed, and if it has been addressed then the stakeholders should be told who is the nominated individual managing the finances at one of Scotland’s key sporting institutions. Is he/she speaking tomorrow when we receive the update?  Has assistance been sought from external accountants/auditors?

The clubs also need to know when they are going to see hard audited figures – especially as the three-month extension of filing deadlines granted by Companies House now means that the statutory accounts need not now be lodged until the end of May 2021.

There has been a change in policy this year in the decision to publish details of director remuneration prior to lodging the accounts at Companies House.

“Remuneration of Executive Directors is decided by the Remuneration Committee [currently comprising David McMillan (chair), William Gardner & Lesley Thomson] with core remuneration packages consisting of base salary, allowances and pension entitlements. Packages are designed to be competitive in the marketplace taking account of the skills and experience of the individuals but without paying more than is considered by the Committee to be necessary or appropriate to attract and retain the individual.”

Mark Dodson’s package dropped from £933k to £454K – but he remains the highest paid CEO in the Home Unions, ​even though the SRU’s total revenues are the least of the four Unions. 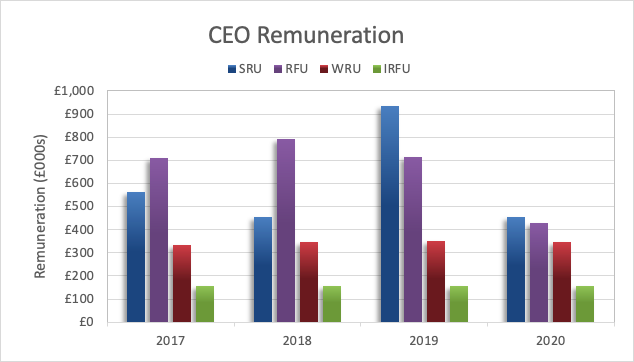 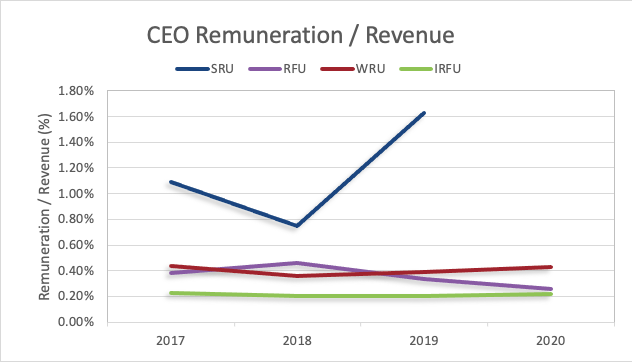 The non-executive directors (David McMillan, Lesley Thomson & Julia Bracewell) and the Council directors (Graeme Scott, William Gardner &  Dee Bradbury) appear to have taken a 20% ‘Covid’ cut in their £15,529 fees – but, interestingly, the WRU accounts reveal that their counterparts in Wales give their time and knowledge free gratis, for the love of the game.

Chief Operating Officer Dominic McKay, we are advised, has been appointed a non-executive director of Old Glory DC – ‘the recently founded Major League Rugby team based in Washington DC’ – but there is no indication of how much SRU cash has headed across the Atlantic.

The Annual Review also reveals the criteria for Dodson’s notorious Long Term Incentive Plan (LTIP) – but whilst the detail is welcome it raises huge questions over the process. You can put lipstick on a pig, but it is still a pig – and likely to be a serious problem if/when Scottish Rugby eventually heads towards Holyrood, begging bowl in hand.

The Remuneration Committee has “substantial discretion over how the LTIP operates” and we are told that targets were agreed against the objectives set in the strategic plan, but we can only draw our own conclusions on the rationale applied  –

About David Barnes 2993 Articles
David has worked as a freelance rugby journalist since 2004 covering every level of the game in Scotland for publications including he Herald/Sunday Herald, The Sunday Times, The Telegraph, The Scotsman/Scotland on Sunday/Evening News, The Daily Record, The Daily Mail/Mail on Sunday and The Sun.