WHEN Mark Dodson unveiled Agenda 3 at last August’s SRU AGM, he declared that an additional £3.6m would be invested into the club game during the first five years of this ‘transformational’ programme.

“Every club in Scotland will benefit from the increased and sustained investment as the announcement today is for all of rugby and not just those at the top of the pyramid,” he concluded as the crescendo to his impressive presentation.

That message was reiterated last month when the long awaited ‘detailed document’ on Agenda 3 was issued to the clubs, including an introductory passage which explained that: “Scottish Rugby has committed to invest £3.6m of additional money into this transformative programme over the next five years. This is in addition to the current ongoing level of £2.8m of club support per year.”

The “detailed document” on Agenda 3 has been published

However, the burden of a £4.125m commitment to pay for Super 6 [six franchises at £137.5k per year over five years], allied to a general lack of detail in the breakdown of the overall funding package, means that it is not at all clear where this financial benefit the clubs have been promised is going to come from.

A recent request from a National One club for more detail on the disbursement of the additional £3.6m elicited confirmation from Andrew Healy, the SRU’s Financial Director, that Super 6 is going to be funded through the Agenda 3 budget. He wrote –

The £3.6m referred to in the Agenda 3 paper is the difference between the current funding position in relation to Premiership / National 1 Player Improvement/medical funding, per the 2017/18 participation agreements, and the planned funding from Super 6 down to Regional Leagues, over the 5-year period from 2019/20 to 2023/24.  The Agenda 3 funding below Super 6 is as per section 1.4 of the Agenda 3 paper; Super 6 funding is as per the Super 6 franchise information paper; and there is an additional average of £0.1m per annum planned for as yet unallocated club funding. This would all supersede the current funding structure.

Healy added that the new funding model for the Club Sustainability Award is not part of this £3.6m figure –

The current expectation is that the overall funding level going forward will actually be higher than it currently is by c.£50k to £100k each year.  However, as the ultimate outcome for this strand is determined by a number of factors, it would be entirely wrong at this stage to publish a definitive commitment in relation to this, so this hasn’t been done.  The levels attained by clubs, however, will be fully funded.

Rangi Jericevich, director of rugby at GHA, is not impressed, pointing out that the £3.6m of “additional money” plus the £50-100k per annum (£250-500k over five years) set aside for the Club Sustainability Award, amounts to almost exactly the same as the cost of Super 6 –

In essence, any ‘new’ investment is going towards paying coaches and players in Super 6 which we are told is under the remit of the High-Performance Department, and in any case, can paying part-time professional players be considered an investment in grassroots rugby?

To categorise this as a significant cash injection into clubs is disingenuous. Any ‘new’ investment in Club Rugby is, at best, incidental.

Instead of welcoming a huge cash injection into the club game, those operating below Super 6 level must now focus on ensuring that the £2.8m investment in ‘Club Support and Development’ reported in the 2017 accounts is ring-fenced

Agenda 3 heralds a swing away from the standard Club Participation Agreement (CPA) to the discretionary Club Sustainability Award (CSA).

While a standardised funding programme will continue for Championship and National League clubs, this will be at a considerably reduced level to the current CPA system.

Meanwhile, the new CSA programme – which provides ‘Gold’, “Silver’ and ‘Bronze’ awards in lump sums for reaching certain participation levels – also appears to be at a significantly reduced level to what clubs are currently able to pick up through the various strands of the CPA. Gold standard clubs are dropping on average £1,700, Silver are dropping £3,400 and Bronze are dropping £850. 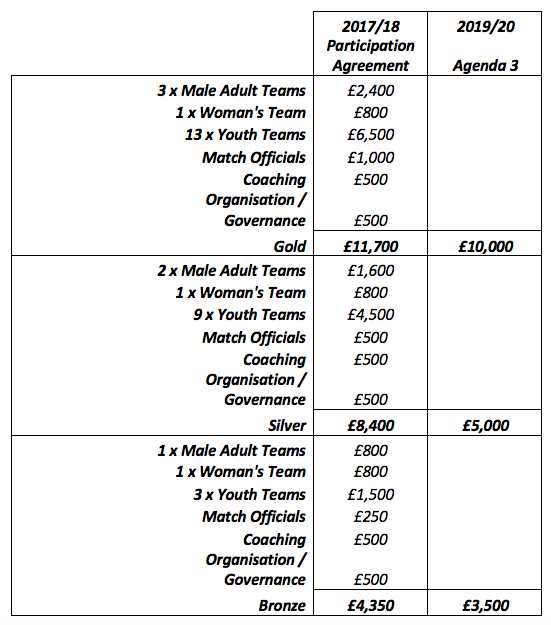 It is not possible to predict how many clubs will reach each standard under the CSA programme, but a generous estimation (based on the potential for clubs hitting targets by ‘associating’ with other clubs) looks like this.

Meanwhile, the ‘detailed document’ explains that: “The Club Sustainability Fund, launched as a pivotal part of BT’s investment as Scottish Rugby’s principal partner in season 2014-15, whereby £1.6m was ring-fenced for club infrastructure improvements over four years, has been a hugely successful scheme and it will continue to assist clubs going forward.”

But it is not stated whether the fund will disburse cash at the same volume as during the last four years, in light of a reduced BT deal.

The grid below pulls all these numbers together, and it highlights the need for Murrayfield to provide the clubs with a reconciliation back to the £2.8m recorded as ‘Club Support and Development’ in last year’s Financial Report.

[For reference, the report explained that: “Clubs are supported through the payment of Participation Monies, Player Accident Insurance, contribution to cup and league travel costs, the Club Sustainability Fund and the payment of all referees travel costs across the country. Ticket commissions which clubs receive for sales of international tickets are included here as are player reward scheme payments, where clubs contributions to the development of players who have gone on to win academy or professional contracts are acknowledged. The joint funding of Club Development Officers in partnership with both clubs and local authorities across the country is also part of club support and development expenditure.”] 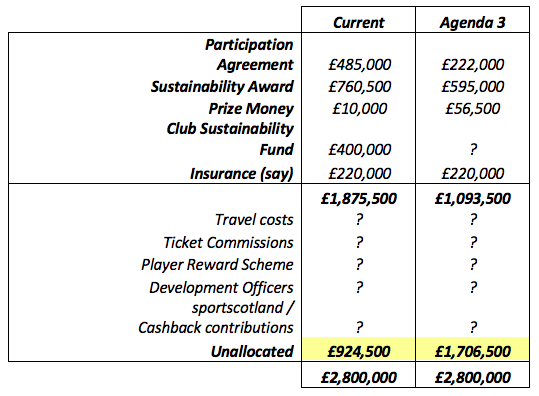 “It is odd that by adopting CSA and reaching proposed grade status there is an overall fall in the direct funding to clubs,” says Ross Findlay, President of Trinity Academicals in Edinburgh. “Further, what if clubs should fail to meet the criteria set? Does the unallocated funding lie dormant within the SRU?

“Of the £2.8m promised for Domestic Rugby, where is the non-direct – unallocated monies – funding being spent? An explicit statement, showing the cash allocation to each expenditure line would not be too difficult to produce. I presume that the tracking of the £2.8m is a key metric that the Council and the Head of Domestic Rugby hold dearly and scrutinise regularly?

“As for this funding outside the Super 6, at least to my knowledge, it is not guaranteed. I cannot recall an implicit statement let alone a commitment to link it to SRU turnover as the RFU (in England) have done. This is key. As a starting point, clubs should be seeking this? Perhaps an item for the incoming President and Vice-President?”

Error, group does not exist! Check your syntax! (ID: 3)

Murrayfield is very proud of its record of investing in the club game. In May 2012 (eight months after Mark Dodson took over as Chief Executive), the SRU accounts reported that its outlay on ‘club support and development’ was £1.9m, which was 4.8 percent of that year’s £39.9m turnover. By last May, that number had grown to £2.8m, which was 5.4 percent of £51.5m turnover.

Staff and Council members boast that rugby leads the field in Scottish sport when it comes to governing bodies giving back to constituent clubs, but a comparison with the same sport elsewhere on these islands is not quite as impressive, as the schedule below [drawn from the RFU, WRU, IRFU and SRU’s most recent accounts] demonstrates.

We have already reported that, despite the RFU being in the midst of a significant financial squeeze which could lead to as many as 100 staff at Twickenham being laid off, the English governing body is sticking to its commitment that for every 60 pence spent on the elite game, 40 pence will be invested in community rugby.

These are, of course, four very different organisations with four very different business plans and funding models – and it is impossible to factor in some expenditure on club rugby hidden amongst other items in the Costs column – but it is an illuminating comparison none the less.

‘Detailed document’ on Agenda 3 leaves too many questions unanswered

THE OFFSIDE LINE’S coverage of grassroots, youth and schools rugby is supported by MACRON STORE EDINBURGH (COLIN CAMPBELL SPORTS). Click HERE to contact the team for information on how they can help with your club or school’s kit supply demands.

Super6 round one: TOL team of the week

TOM Brown’s leadership qualities were much in evidence as Boroughmuir Bears got off to a winning start at Bridgehaugh. Brown’s opposite number, Stirling Wolves captain Marcus Holden, dug in well, but the Bears full-back’s contribution …