IT is getting on towards midnight local time, but Mike Adamson is bright and breezy when he answers the phone in his hotel room. Fresh from officiating at the Hong Kong Sevens, he has a few days to kill in Singapore before the next leg of the HSBC Sevens World Series kicks off the following weekend.

He talks about a trip to the island resort of Sentosa which he has lined up for the following day, and all of a sudden the decision he made two and a half years ago to call time on a fine playing career just a few months shy of his 30th birthday and focus instead on becoming a top level referee doesn’t seem that crazy after all.

Adamson now spends several months every year travelling the world as a core referee on the World Series, and earlier this month was named as one of twelve whistlers who will officiate at the inaugural men’s Sevens tournament at the Olympics in Rio later this year.

No wonder he is in a chipper mood. Life has been pretty good since making the jump from poacher to gamekeeper and he knows it. But he is also entirely satisfied that he has been the master of his own destiny. Lady luck may have smiled upon him along the way, but hard work and determination have been key to his maximising those slices of good fortune. 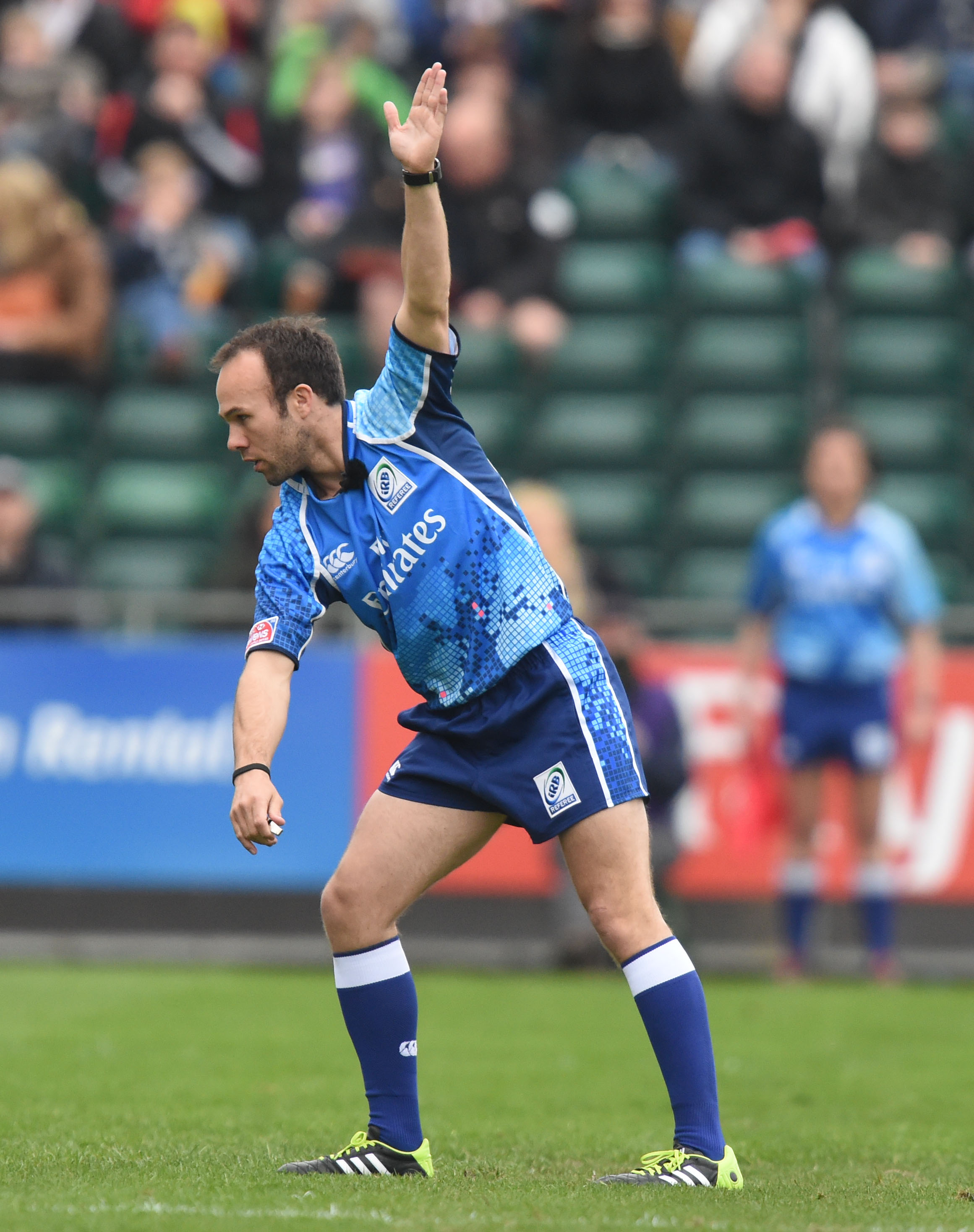 Take, for example, his big break in May 2014, when he was parachuted into the refereeing roster for the Glasgow leg of the Sevens World Series less than a year after he had officiated in his first senior match.

“Having played in the World Series and knowing the set-up, I wanted to get to the Sevens, but because the Olympics was only two or three years away I guess the planning had already been put in place for that, and all the referees in line to go to the Rio were already operating on the World Series,” he recalls.

“Then it got to the Glasgow leg, and the French referee –Alex Ruiz – had to pull out for personal reasons. I was meant to be assistant refereeing at that tournament and I got a phone call from Paddy O’Brien, the referee manager, asking if I fancied taking Alex’s place, so that was a bit of a shock on the Tuesday before the tournament. But it all went well and I got invited down to Twickenham the following week, and then got appointed to all nine tournaments the following season.”

“So, there was a bit of luck to get involved in the first place, but when opportunities like that come along you’ve just got to ride that wave. You just have to always make sure you are as prepared as you possibly can be, because you never know when that chance is going to come along to step up to the next level.”

Adamson’s background as an elite level player was crucial to him being earmarked from an early stage as an individual with the potential to raise the profile of Scottish refereeing on the international stage, and he was pushed hard from the very start.

“I saw refereeing as a good opportunity to stay involved at the top level. I guess I didn’t see the same opportunities in coaching,” explains the former utility back, who was involved in three Premiership title successes and two Cup triumphs with Glasgow Hawks, signed a professional contract with Glasgow Warriors in 2007, and played a number of seasons for Scotland on the international Sevens circuit.

“When I came back up to Scotland in the summer of 2012 – after a year playing for London Scottish – I got in touch with [SRU referee development manager] Andy McPherson about making the switch. I was back playing at Hawks so I spoke to them, too, and we decided that I would play league games but not in the Cup, and use those free weekends to lead into making the switch to becoming an out-and-out referee.”

“I was coaching at Kelvinside Academy so I would referee the under-16s and the school 1st XV games. I’d also referee intramural games at Glasgow University, and Andy McPherson would come down to give me a few tips.”

“My first senior game was Heriot’s versus Livingston in the Cup [in November 2013] and I suppose that was a good opportunity for someone like me to make that step because there was likely to be some scope for me to make mistakes. Then, we got to about Christmas time and Hawks were comfortable in mid table – they weren’t going to win the league and they weren’t going to go down – so I decided it was time to pull the pin on playing and put all my energy into the next stage of my career.”

“I got pushed on pretty hard from then on and ended up refereeing a Premiership match at the end of the season, so I guess they had a level of confidence in me, but they also said that they would not push me on until they were sure I was ready for the next stage.”

Adamson has never looked back, but it is only fair to clarify that his life is not all overseas rugby tours with long days on the beach relaxing between refereeing appointments. His trip to Sentosa, he explains, is a well-deserved day-off.

“I’m on a 25-hour-per-week contract with the SRU but I probably go over and above that. I’d say I am probably fitter now than I ever was a player. I was never heavy but I’ve lost a bit of weight. We don’t have to spend hours lifting weight, it’s all stamina and speed work, and I know the players are pretty impressed with the scores we’ve produced for the fitness and speed work,” he says.

“When I’m in Scotland I’m through at Murrayfield about three times a week for game reviews, training and game preparation. I also spend a bit of time going to local referee societies to present meetings and presentations to them. And I deliver level one, two and three refereeing courses throughout the year. So, it’s a pretty busy week.”

“Then, when I’m away on with the World Series, it’s just as busy between tournaments. We’ve got our fitness work to do – a couple of running sessions and a gym session – then we’ll have a technical session where we sit down and go through clips from the previous weekend and review a few games.” 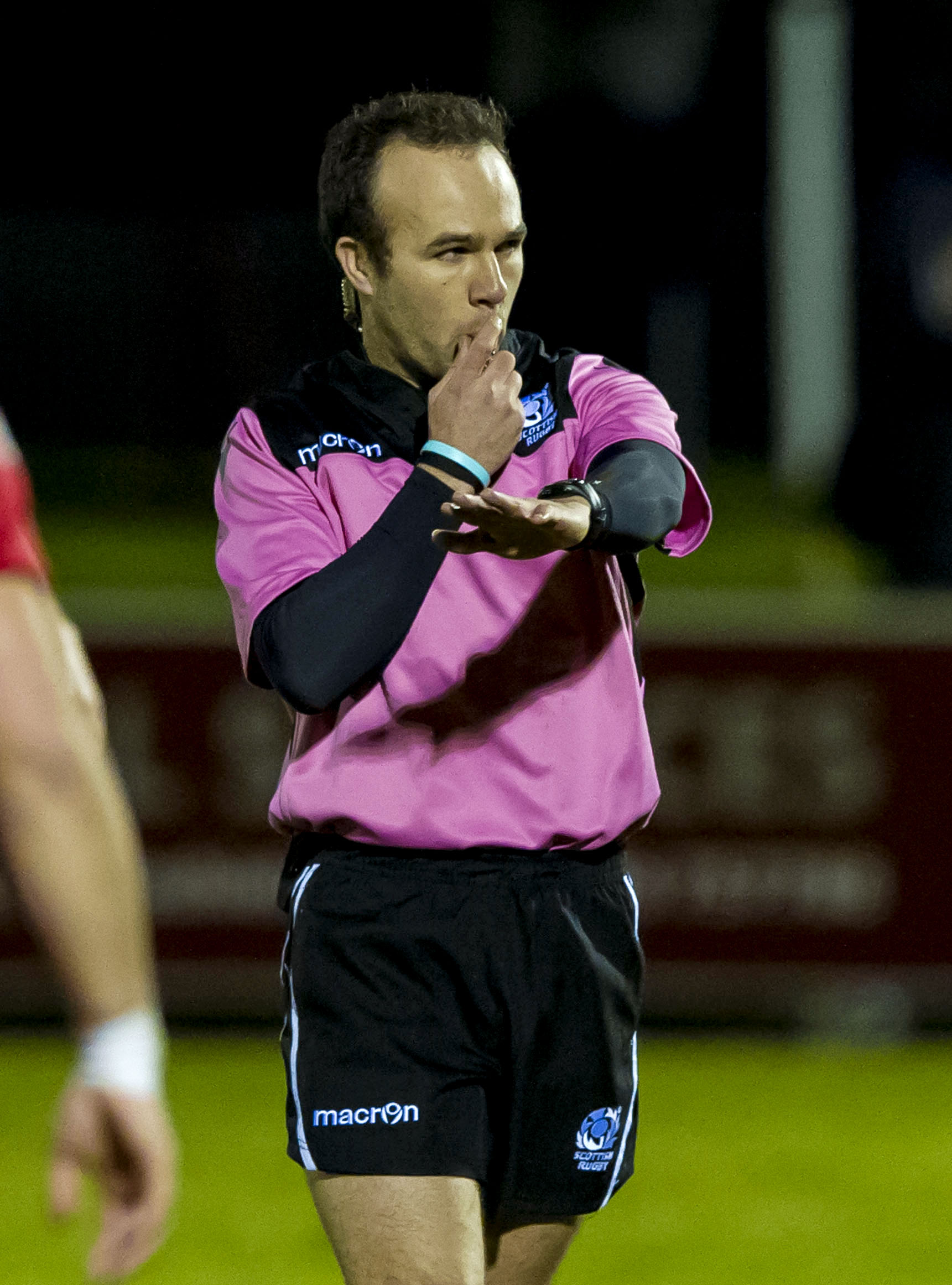 “And we’ll perhaps review a few clips which have been sent by coaches on to the referee’s manager. We’re generally trying to come to a consensus on how certain situations were handled and whether we could things differently in the future. We’ll also look for a few trends from the previous weekend, which we want to keep an eye out for in future.”

“At some point in the week you are likely to sit down with a couple of coaches as well, to go through some games with them and just explain your thought process.”

“This year has probably been the busiest year I’ve had as a player or a referee. They’ve added an extra leg in this year so it’s a ten tournament season and they’ve condensed it as well, so from Dubai at the start of December through to London near the end of May, you are pretty much in a routine whereby you are away for two and a half weeks, then back for two and a half weeks, then away again. With jet lag, the need to maintain your fitness, and all these sorts of things thrown in, it is pretty full on.”

Not that Adamson would have it any other way. The Olympics appointment is a huge boost but he has no intention of stopping there.

“I definitely want to progress in the fifteen aside game because that’s where I see myself in the next four to five years. I want to try to get involved in the Pro 12 set-up as soon as possible, and the long term goal is to get to a World Cup,” he says.

“Who knows if 2019 is too soon, but it’s a goal to aim for – as I’m sure it is for the other referees in Scottish Rugby’s High Performance Departmente. Whether it is achievable will become clearer in the next couple of years.”

If Adamson does make it to Japan in three years’ time then it will not be a moment too soon so far as Scottish rugby is concerned. There has not been a Scottish referee at a World Cup since Jim Fleming in 1999 (although Malcolm Changleng was a touch-judge in 2007) and no Scot has been the man in the middle at a top table international match since 2002.

“Referees, like players, are ambitious and set themselves goals. You want to get to the top, and the pinnacle of refereeing is doing a World Cup Final. Not everyone is going to get to do that but it’s something to aim for,” concludes the man who has his sights set on breaking through that glass ceiling which has frustrated Scottish refereeing for far too long.

About David Barnes 3183 Articles
David has worked as a freelance rugby journalist since 2004 covering every level of the game in Scotland for publications including he Herald/Sunday Herald, The Sunday Times, The Telegraph, The Scotsman/Scotland on Sunday/Evening News, The Daily Record, The Daily Mail/Mail on Sunday and The Sun.

Updated document states: ‘Rugby for players in the women’s category is limited to those whose sex was recorded as female at birth’ …