CRAIG HISLOP uncovered this fantastic old newspaper cutting about a year ago, which beautifully describes the scrummaging prowess of his uncle Brian ‘Bomb/Bomber’ Hislop, who passed away over the weekend.

Written for the local Langholm paper by Wattie Bell – 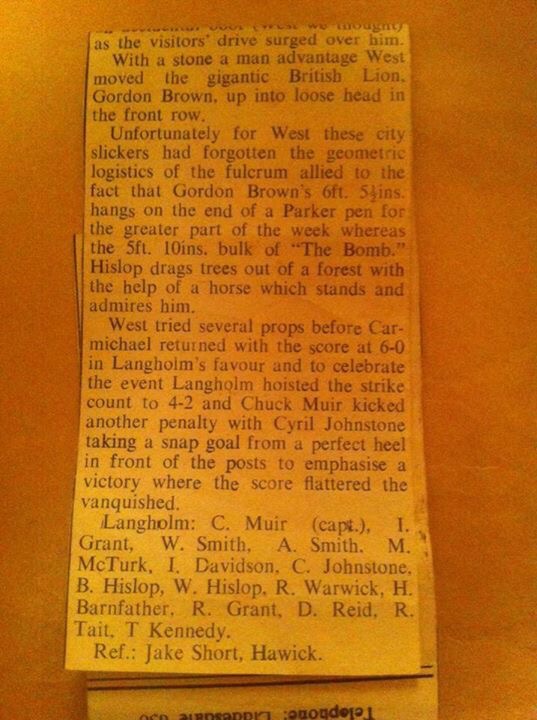 It’s a great piece of writing about one of the great characters of Borders rugby.

Hislop played at prop for Langholm for around 20 years and won recognition from the South, was part of the Scotland B squad that played their French counterparts at Mayfield in Dundee in 1983 and then travelled to Albi in the south of France for the corresponding fixture in 1984.

He worked on the family farm, Terrona, just outside Langholm and was blessed with the natural strength that came with his job. When he stepped down from playing, he went on to become an important figure in the mini/midi/youth coaching at the club.

From 2002-2006, he brought his set-piece experience to national age-grade squads, working as a scrum coach.

Kenneth Pool, chairman of Langholm RFC, said: “A big man and a great character, he was always willing to give good advice and help where he could at the club.

A man of great humour, he will be much missed by his many friends at the club, in and around Langholm, the Borders and further afield.”

He is survived by his wife Francis, son Robin and daughters Catherine and Lisa.

THE OFFSIDE LINE’S coverage of grassroots, youth and schools rugby is supported by MACRON STORE EDINBURGH (COLIN CAMPBELL SPORTS). Click HERE to contact the team for information on how they can help with your club or school’s kit supply demands.
About David Barnes 3180 Articles
David has worked as a freelance rugby journalist since 2004 covering every level of the game in Scotland for publications including he Herald/Sunday Herald, The Sunday Times, The Telegraph, The Scotsman/Scotland on Sunday/Evening News, The Daily Record, The Daily Mail/Mail on Sunday and The Sun.