THE standings in the TOL Six Nations Predictor League after the first round of matches have been published, with The Offside Line’s very own David Barnes shamelessly capitalising on the nation’s  misery to climb to the top of the table by being one of only two contestants to bet against Scotland.

The final make-up of the competition has been confirmed with readers Martin Cooper, Andrew Slorance and Barry Thomson taking the full roster to 15, having made their initial predictions as Facebook comments before last weekend’s matches. A special mention goes to Mr Slorance, who was the only person to predict the right winner and score margin in any match out of 45 predictions in total, by guessing that England would win by 31. 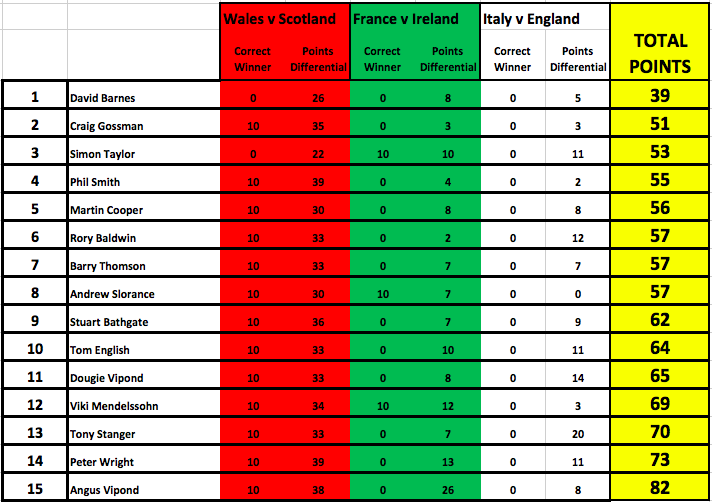 The aim of the game is to accumulate the least number of points over the course of this year’s NatWest 6 Nations championship.

Every match week the 10 contenders will have to select the winning team from each of the three games and predict the margin of victory. Players will be penalised 10 points for getting the wrong winner and then a point for each match point they are out by.

For example, if contender A selects Ireland to beat France by 10 points and contender B selects France to beat Ireland by 7 points and the final score is a 4-point win for Ireland then –

A running total of points accumulated by each contender will be published each week until a winner is unveiled after the final round of matches on 17th March.

Tony Stanger is a former Scotland international and (before fellow Hawick man Stuart Hogg overtakes him!) is still Scotland’s joint top try scorer of all time. He now runs his own consultancy business helping leaders become outstanding coaches. Passionate about sport and the factors that impact performance, he has written a book for parents to help them better understand their role in helping their kids reach their sporting potential. Hoping to be above average in predicting rugby matches!

Tom English is chief sports writer for BBC Scotland and, as a journalist, has been getting his Five/Six Nations predictions laughably wrong for the last 22 years. He has written The Grudge, the story of the 1990 Grand Slam, and No Borders, an oral history of the Irish rugby team. He’s also co-written, with Peter Burns, When Lions Roared, the tale of the famous 1971 Lions tour of New Zealand.

Craig Gossman plays on the wing for current BT Premiership champions Ayr and is a member of the Scotland Club XV squad, scoring one of the team’s seven tries in their recent victory over the Scotland Under-20 team in a Six Nations warm-up squad. He is very polite about continually being called Kerr – his brother’s name – in The Offside Line’s weekly BT Premiership Leaderboards feature.

Simon Taylor played 66 times for Scotland toured with the British and Irish Lions in Australia in 2001 and in New Zealand in 2005, although injury prematurely curtailed both trips. He played three seasons in France with Stade Francais between 2007 and 2010, then three seasons in England with Bath between 2010 and 2013. After a stint coaching Watsonians he now coaches Edinburgh University.

Phil Smith has been head coach at Heriot’s since 2012 and was at the helm when they won the league and cup double in 2015 and the league again in 2016. He is also head of rugby at Glasgow Academy and has coached Scotland at various age-grade levels as well as the Club XV side.

Viki Mendelssohn is one of the founders in Scotland of women’s rugby. She works now in sports PR, events & sponsorship and runs Scotland’s largest Touch Rugby league.

Peter Wright played club rugby at prop forward for Lasswade, Boroughmuir and Melrose. He was capped 21 times by Scotland and toured New Zealand with the Lions in 1993. He has since coached a number of clubs in Scotland, including Glasgow Hawks to the league and cup double in 2005, had a stint with Scotland Under-20s and is currently calls the shots Boroughmuir in the BT Premiership. In his spare time, he does a bit of punditry for the BBC and is a cricket umpire during the summer.

Rory Baldwin is the editor and co-founder of the Scottish Rugby Blog and has little practical experience to draw on outside of a few bleak outings for Inverness Royal Academy’s rugby team in the mid-90s. The Scottish Rugby Blog offers a fans’ view of the game and celebrated its 10th anniversary in 2017, a year that saw them pass the 1,000,000 words published mark and launch a new podcast.

Stuart Bathgate was The Offside Line’s star signing during the summer. He has been the rugby correspondent for both The Scotsman and The Herald, and was also The Scotsman’s chief sports writer for 14 years from 2000. He first played rugby in 1972, in the second row of the George Watson’s College 17th XV. He impressed his coach so much that he was soon making his debut for the 18ths.

David Barnes isn’t very good at taking a hint and founded The Offside Line in March 2016 when the mainstream press stopped giving him work. He has been a freelance rugby journalist since 2004 covering every level of the game in Scotland for publications including The Sunday Times, The Telegraph, The Scotsman/Scotland on Sunday/Evening News, The Herald/Sunday Herald, The Daily Mail/Mail on Sunday and The Sun.

Barry Thomson is married with three kids. Brain of a fly half, body of pre-professional era prop.

Andrew Slorance is former Hawick YM 2nd XV utility player and Prem 2 level ref, who has always been told he can talk a good game even if he couldn’t play it or control it – bookies would say otherwise!

Martin Cooper is teacher from Newcastle though long suffering Scotland fan and avid follower of his home town rugby – ‘the mighty ‘Rose’.