STUART HOGG says he didn’t ever doubt that Scotland were going to come out on top in yesterday’s match against Ireland.  The full-back scored two of his team’s three tries as they raced to a 22-5 lead with less than half an hour played, but the hosts then had to mount a desperate rearguard action against a resurgent opposition during the third quarter. The boys in blue even fell 21-22 behind with 20 minutes to go, but managed to rally at the end to get their Six Nations campaign off to a flyer through two late Greig Laidlaw penalties.

“I don’t know about the rest of the boys, but I never felt we were in a position where we were going to lose that game. We were under the pump a little bit but I had the confidence in every single player out there in a Scotland jersey,” said Hogg.

“It has been over ten years since we won the first game in a Six Nations so we are delighted with that, bit it is now about analysing that game and seeing where we can improve as we start getting ready for France next Sunday,” he added.

“I think is is definitely up there [as one of the most satisfying wins in a Scotland jersey]. We’ve been training well over the last couple of weeks, and been fully focused on the task in hand. We knew it wasn’t going to be easy – a massive physical challenge – and everything started upfront even though we lost a few scrum penalties early on.”

“We knew that they weren’t going to give us anything easy but we got ourselves in a good position in the first half and maybe relaxed a bit at the beginning of the second half, but we adapted well and I’m obviously chuffed to come away with the win.”

Captain Laidlaw paid tribute to the work head coach Vern Cotter has done in building the belief in the squad necessary to close out tight games.

“There definitely is {a change of mentality within the squad]. We know what plays to go to and in tight games we know what we need to do to keep ball. It is the way we are coached during the week by Vern and the rest of the coaching team. We know how to build pressure and gather field position and that’s why we won the game today,” he said.

“It would have been easy [to be overwhelmed during that third quarter] but that isn’t this group anymore. We are a changed group and we want to drive this whole thing forward – especially when we pull those jerseys on at home. We don’t want to be getting beat anymore.”

“There was frustration when we fell behind in terms of how we were playing at that time and how we were letting them dictate the game, but the level headedness we are starting to get in the side means we understand that playing against somebody like Ireland there are always going to ebbs and flows – and you’ve got to accept that, understand why it is happening and fix it. And that was the most important and the most pleasing thing – we understood why it was happening and got ourselves back in front.”

Ireland hammered Scotland by 30 points the last time they visited Ireland, and the contrast in the mood inside the home camp between that occasion and this was not lost on Laidlaw.

“It feels like a different sport today. We were on the end of a bit of a dusting the last time,” he said. “Ireland are a quality team, they scored 40 points against New Zealand three months ago and we stopped them playing today – defensively we were strong throughout the field. We stuck to the plan.”

Meanwhile, Ireland coach Joe Schmidt insisted that he wasn’t making excuses but did have a grumble about Scots bodies on the deck slowing possession down and also mentioned that his team’s preparation for the match had been disrupted by the Edinburgh traffic.

“Especially in the first half, there was a lot of bodies on the floor at the breakdown and it did make it very hard. Connor Murray was reaching over and the ball was very slow – and it just made it difficult for Paddy Jackson because they had the intuitive in getting off the line and they did it really well so paddy always felt crowded,” he said.

‘Whereas the reverse was true of them – they got some really good, quick, front-foot ball and did a really good job with it.”

“We arrived 15 minutes late to the stadium and we were late for most things all first half. We were sluggish. We got some really good field position and didn’t convert, which is frustrating. And at the same time they got probably too much room to move and we didn’t close that space down and missed a few tackles,” he added.

WHAT THE SCOTS SAID ABOUT THOSE 3 TRIES … 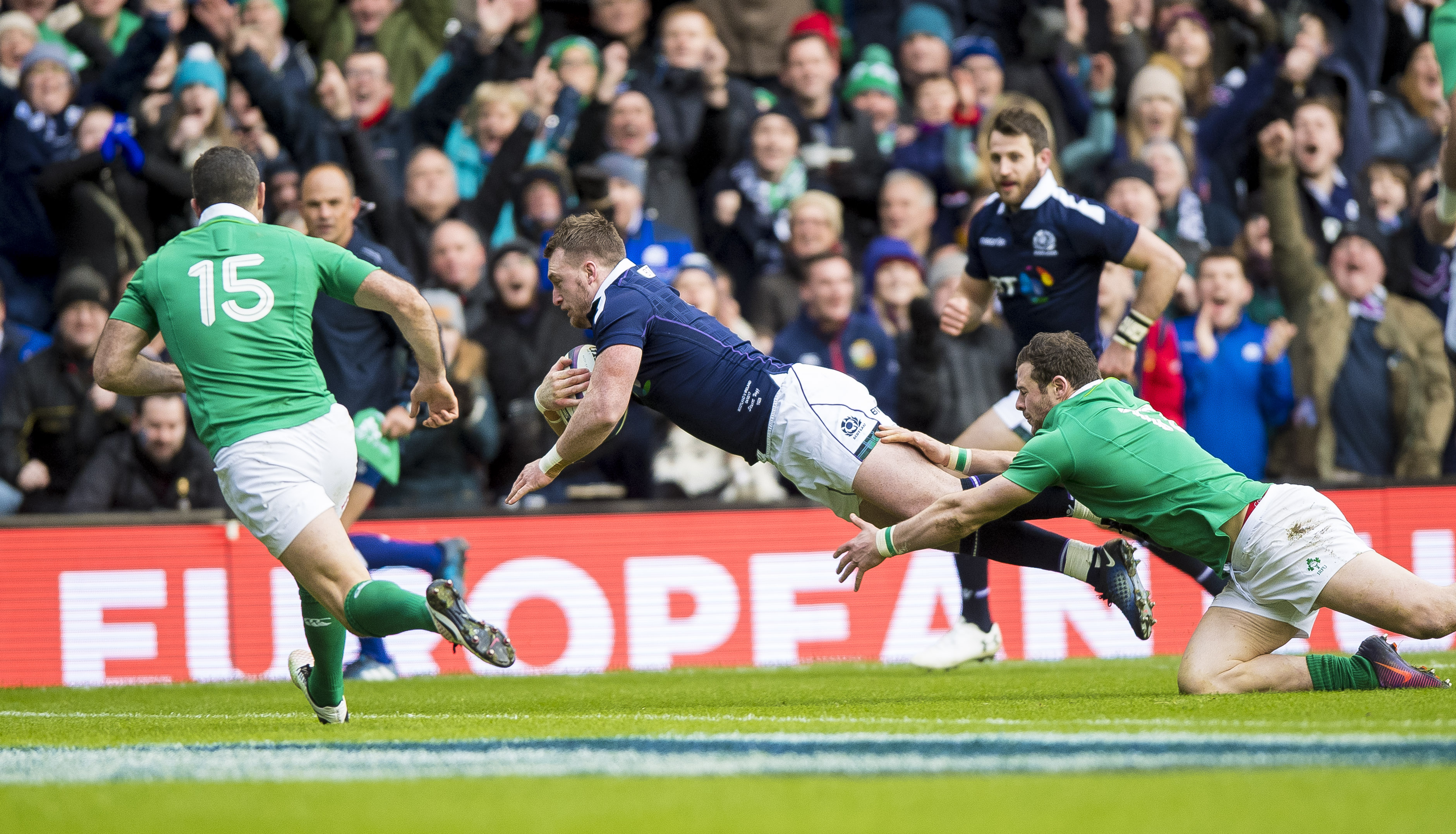 “As he says himself: Finn Russell’s bounce pass is undefendable, and thankfully it bounced up into my hands If I’d had another five guards I might have passed it on to Tommy, but the try-line was coming so I thought take it myself. The forwards worked us into a good position and Finn noticed the space out wide. Its something we’ve worked really hard on – looking up and seeing what is front – and we really took the opportunity there.”

“A couple of times early on I gave the ball to Sean Maitland and Rob Kearney read it really well and bounced off and tackled him, so I thought I would try something a little bit different and thankfully it paid off. But it comes down to the forwards putting us in good positions and our execution of catch-pass to get the ball put wide as quick …” – Stuart Hogg

“It’s something Jonathan Humphries had up his sleeve. He was dying to bring it out. I wasn’t sure we should use it. I think we tried it a few years ago and didn’t get it right so that’s why I was a little bit hesitant today, but the team have now got the confidence to try these things – they’re taking that responsibility to develop things on the playing field and taking it into the game and getting results. This is where I am really happy to hand over – when these guys are taking control of everything that’s my job done …” – Vern Cotter

About David Barnes 3180 Articles
David has worked as a freelance rugby journalist since 2004 covering every level of the game in Scotland for publications including he Herald/Sunday Herald, The Sunday Times, The Telegraph, The Scotsman/Scotland on Sunday/Evening News, The Daily Record, The Daily Mail/Mail on Sunday and The Sun.